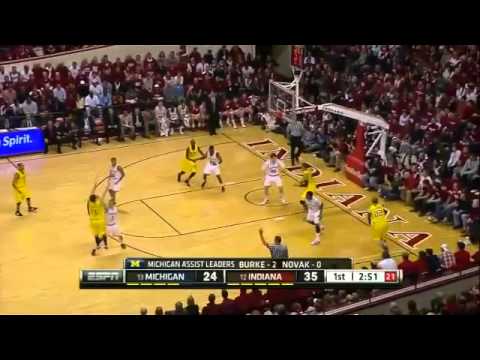 In the first half, Michigan trailed by as many as 15 points and was on the ropes early. Indiana was just a couple plays away from opening up a blowout. The Wolverines were in desperate need of a run to get some type of momentum heading into the break. Blake McLimans and Stu Douglass provided just that as unlikely heroes off the bench. With 3:38 to go in the first, Trey Burke found McLimans open in the corner for three and he drained it, cutting the lead back to single digits. McLimans was maligned as a three point shooting big that couldn’t shoot last year but he’s stepped up and hit big threes in difficult spots this year, now three-of-four for the year. Two possessions later, Douglass got hot. Off a dish from Hardaway, Douglass hit a bomb from three-point range. Then he did it again on Michigan’s next possession, this time from the left corner off a pass from Burke. On both shots, Douglass set his feet and gathered himself before he let it fly — which seems to be the difference between Douglass’s made three-pointers and his misses. In a span of one minute and 18 seconds, Douglass and McLimans cut the Hoosier lead from 12 to five points to help Michigan claw back into the game.

2. Hardaway follows Oladipo’s dunk with a slam of his own

Victor Oladipo’s dunk with 7:20 left in the game very well could’ve been a back-breaker for Michigan. The highlight-reel two-handed slam ballooned Indiana’s lead back up to double digits and ignited Assembly Hall, forcing John Beilein to call a timeout. But out of the timeout, Tim Hardaway Jr. sent a statement of his own. All the way down to the celebration. Off of a screen from Evan Smotrycz on the left wing, Hardaway saw just enough open space in the lane and took off. He got a step on Oladipo, rose up and finished with a powerful one-handed slam plus the foul. The dunk silenced the Indiana crowd and brought the Michigan bench to its feet. Hardaway added a bit of flair to the end of the play, mimicking Oladipo’s dunk celebration and setting the stage for the final minutes.

If you’re going to make a comeback, especially at Assembly Hall, you’re going to have to play solid defense and force turnovers down the stretch. Michigan had its fair share of defensive struggles but it did exactly that in the closing moments. This sequence of five consecutive defensive stops was the backbone of Michigan’s late comeback. The stretch began with a steal by Douglass and Michigan down seven and also featured a Novak charge, an errant pass by the Hoosiers and a Hardaway steal. After a missed free throw by Verdell Jones with just over three minutes remaining, Burke grabbed the loose ball and passed it up to the wide-open Hardaway, who slammed it on the other end. The slam capped a 7-0 run fueled by good defense and forced turnovers and, suddenly, the game was tied at 68 a piece with three minutes to play. These are good, smart, defensive possessions by Michigan across the board. There are great individual efforts on the steals and charges but also great work switching, helping and, most importantly, denying the post. The stretch ends with Douglass fouling Jones about 30-feet from the basket in what’s really a lose-lose situation. Physical ball pressure to force Indiana’s offense further from the hoop had spearheaded Michigan’s come back and you don’t want to stop that now and that’s exactly what Douglass is trying to do here, but the foul proved extremely costly.

Down two with the ball and just under three minutes left, one of your top priorities should be to get a good shot on offense. Michigan got some decent looks in this situation but came up empty on all of their attempts, many of which seemed to be just a little rushed. Douglass takes an early three on the wing that he misses. Hardaway misses another three point look in transition. Out of a time out Michigan goes to Burke on the pick-and-roll, he tries to force the issue on Oladipo (who’s playing him to drive, going under the screen and does a great job) and misses. Michigan gets the ball back with nine seconds on the shot clock and has to take a quick shot which results in a pretty good three point look for Hardaway, another miss. The Michigan defense held the Hoosiers to just six points in the final 6:30 of the game but the offense needed just one or two more baskets to take the lead. The shots didn’t go in and these are the possessions that Michigan will look back on and wonder what could have been.

With 23 seconds to go, Jones finally delivered the back-breaker to make Michigan pay for its empty offensive possessions. With the shot clock winding down, Jones took two dribbles to his left and fired, with Hardaway’s hand right in his face. Hardaway does a decent job of contesting but you would like to see a bit more inspired defense here. Jones is Indiana’s “shot clock guy” and once he touches the ball you know he’s looking for a shot. As the shot left his hand, all Hardaway and Michigan could do was watch as the ball hit nothing but net, giving Indiana a two-possession lead with 23 ticks left. Michigan kept battling with a late Stu Douglass three and a desperation heave from Zack Novak but it wasn’t enough as Indiana escaped with a two point win.