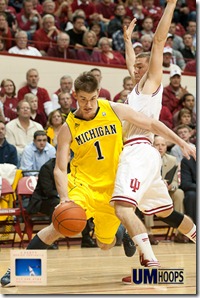 There are no moral victories in a league where every game seems to boils down to a one or two possession battle. Games are opportunities and losses are missed opportunities. Michigan let a golden chance for a coveted road victory slip away at Assembly Hall on Thursday night. The Wolverines never led but had four shots and a desperation heave to tie or take the lead in the final three minutes of play. Those shots all rimmed out and Michigan’s last gasp effort fell short. The Wolverines missed out on their third win at Assembly Hall in almost a quarter-century and Indiana escaped with a 73-71 victory.

For 15 minutes on Thursday night, Michigan looked like a team playing its first Big Ten road game. At that point, down 33-18, the Wolverines looked defeated but they battled back. Michigan outscored Indiana by 13 points over the final 25 minutes but it wasn’t enough. The slow start against a good opponent in relatively adverse conditions was eerily similar to either of the last two Michigan games against Duke where Michigan simply dug itself too deep of a hole to overcome.

Michigan’s offense, especially given its star’s shooting struggles, was pretty solid on the day. The Wolverines amassed 1.08 points per possession against Indiana, which is the second best mark allowed by the Hoosiers this season. Michigan shot 50% (17-34) on twos and more importantly 42% (10-24) on threes. Douglass, Novak, Smotrycz and McLimans were a combined 8-of-12 from three point range. Michigan rebounded 27% of its misses which isn’t a great number but did allow for 11 second chance points. An 18 percent turnover rate isn’t too shabby but there were still a couple careless giveaways that really seemed to cost the Wolverines. There were a lot of sloppy or manufactured points but when this team can seem to play a bad offensive game and still score at this rate it means the offense is probably going to be okay headed forward.

The Michigan offense was good enough to win but the defense was a shade below acceptable, mostly due to early struggles. The Wolverines surrendered 1.11 points per trip and just couldn’t force Indiana into enough bad looks from the field. The Hoosiers scorched the nets inside and out, 53% on twos (20-38) and 64% on threes (7-11). Christian Watford was mostly unstoppable when Indiana went his way (25 points on 11 shots) and Cody Zeller was equally efficient (18 points on 10 shots). Watford was 3-of-4 on three point attempts while the only Hoosier to miss a three was Victor Oladipo (2 for 10, 0-3 3pt). Michigan was able to hang with Indiana because of a dominating performance on the defensive glass, grabbing 75% of Indiana’s misses, and forcing turnovers on almost a quarter of the Hoosier’s possessions. There were bad stretches for the Wolverine defense but five consecutive stops late in the second half were the only reason that Michigan had a chance to win this game near the end.

This loss is frustrating because there were so many possessions that Michigan seemed to give away. Silly turnovers off of inbound plays, bad or rushed shots, open Indiana shots because of miscommunication in transition or a bad rotation, missed free throws (even a front end of a one-and-one). It’s almost impossible to win on the road in this league when you give that many possessions away on both ends of the floor. Those are also great teaching moments. This team will improve over the next two to three months if it learns how to minimize those mistakes.

If this game leaves a bitter taste, there probably isn’t a more motivating team to welcome into Crisler Arena than Wisconsin. The Badgers travel to Ann Arbor on Sunday for a nationally televised game which will give the Wolverines an opportunity to avenge this play.