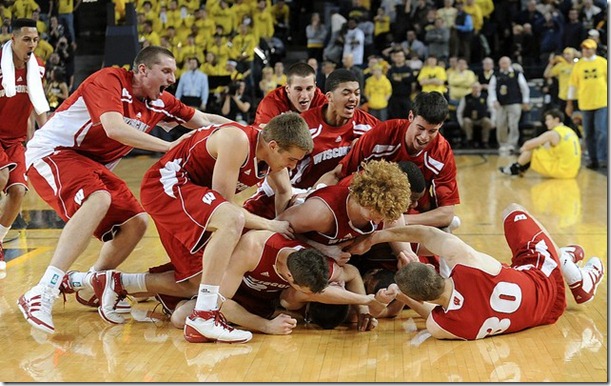 Michigan will have little time to regroup from its tough Thursday night defeat in Bloomington as the Wolverines welcome Wisconsin to Ann Arbor in a nationally televised affair. Wisconsin enters the game reeling after suffering a pair of home losses, to Iowa and Michigan State. For Michigan, it’s a chance to avenge last year’s buzzer-beating loss and to earn its first win over Wisconsin since John Beilein took over the program in 2008.

It’s tough to get a handle on this Wisconsin team. The Badgers are ranked No. 2 nationally by Ken Pomeroy’s metrics but have shown signs of weakness that are unfamiliar for Bo Ryan coached teams. Wisconsin has already lost to Marquette, Iowa and Michigan State at home and also lost on the road to North Carolina. Jordan Taylor was a consensus preseason All-American but his production is down in almost every notable statistical category. As a unit, Wisconsin’s statistics are still very good but there’s just something that hasn’t quite gelled for this year’s Wisconsin team.

The Badger offense still plays a similar brand of basketball to last year’s team but just doesn’t do it quite as efficiently. Wisconsin still shoots a lot of threes, 39% 3PA/FGA on the year, doesn’t turn the ball over and plays at an extremely slow tempo. Its 14% turnover rate is the best in the nation but, similar to Michigan, you aren’t going to see a lot of free throw attempts or offensive rebounds from the Badgers. Wisconsin wants to maximize possessions by running clock, valuing the basketball, getting good shots and knocking them down.

The Wisconsin defense has been stifling. Only one team, Iowa, has surpassed one point per possession versus Wisconsin and the Badgers have the best shooting defense in the country. Opponents have made just 38% of their twos and 25% of their threes for a dreadful 38% effective field goal percentage. All three of those metrics rank in the top four nationally and the effective field goal percentage defense is tops in the country. Wisconsin doesn’t force many turnovers but it doesn’t need to when it’s cleaning up the defensive glass – 73% defensive rebounding rate, 20th nationally – and not fouling – 26% FTA/FGA allowed, 13th nationally.

What happened in Wisconsin’s losses? The Badgers went cold. Wisconsin’s effective field goal percentage was under 43% (42, 38, 37 and 37) in all four losses and it failed to reach one point per possession in any of those games. The Badgers were notably cold from 3-point range in those games making just 21 of 97 threes (21.6%). The sample size is still small for conference play but Wisconsin ranks 11th in shooting during Big Ten games, making just 48% of its twos and 27% of its threes.

Personnel wise, the entire country is familiar with Jordan Taylor. The point guard was electric last year and never seemed to miss a big shot. His 3-point shooting numbers are down almost 10% and that’s cost his average almost five points per game. That being said, he’s coming off of one of his best games of the season: 28 points on 11 shots against Michigan State. Taylor might be struggling but slowing him down is the first priority when you face Wisconsin.

Jared Berggren is a redshirt junior big man that has stepped up nicely to fill the void left by Jon Leuer and Keaton Nankivil’s graduation. Berggren is a space eater, shot blocker and decent rebounder that attempts about a third of his field goals from three point range. He’s joined in the front court by Ryan Evans, a 6-foot-6 junior who’s the team’s best defensive rebounder but a limited scorer that makes just 47% of his twos. Ben Brust and Josh Gasser are the primary players in the backcourt with Taylor. Brust is a sniper, knocking down 39% of his threes and attempting well over half of his shots from three point range, while Gasser is a do-everything kid who doesn’t shoot much but will hit shots – 20 of 38 on threes this season. Mike Bruesewitz starts on the wing and is an energy player with a knack for grabbing offensive rebounds.

The battle of strengths and similarities in this game is fascinating. Both teams prefer to play the game at a slow tempo and shoot a lot of threes. Neither team is great at forcing turnovers but both historically value the basketball as well as any program in America. Both are reluctant to crash the glass but are strong of the defensive glass. Neither team gets to the free throw line much but both do a great job of avoiding fouls. Michigan is one of the best shooting teams in the country while Wisconsin has the best field goal percentage defense. Wisconsin tends to fall in love with the three point shot but defending the three has been Michigan’s Achilles’ heel this season.

The recipe for beating Wisconsin is clear: you have to stop them. You can’t get into a shootout, even an extremely slow paced shootout, and expect to come out alive. This Badger team can flat out defend and if you are letting them score, they will outscore you. Michigan will not win this game if it fails to hold Wisconsin under a point per possession. That means three point defense and defensive rebounding are the primary keys to a Michigan win.

Pomeroy’s computers love Wisconsin and predict a 59-52 Badger win with just a 21% chance at the home upset. Michigan needs to rebound from a loss in Bloomington and a statement win at home over Wisconsin would fit the bill.

This and that: The game is televised on CBS with Verne Lundquist and Clark Kellogg on the call. A sell out is expected and fans are urged to wear maize as part of a Maize Out and maize pom-poms will be distributed. Several prominent alumni – including Cazzie Russell, Rudy Tomjanovich, Phil Hubbard, Daniel Horton andCampy Russell – are expected to be in attendance as part of the Player Development Center dedication.