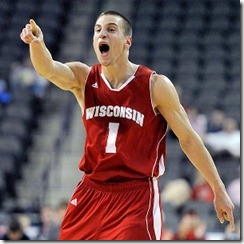 Phil Mitten has been blogging about Wisconsin basketball for quite some time, most recently at Bucky’s Fifth Quarter, and he agreed to answer some questions about Michigan’s upcoming home match-up with the Badgers. I answered a few questions over there if you want my opinions on Michigan’s season to date. The traditional game preview was also posted earlier this morning.

1. By my eyes, the story in Madison is the three point shot. Wisconsin has been attempting more and more threes in recent seasons and the Badgers seem to finally have discovered the “die by the three” side of mantra. Talk about the prominence of three point shooting in Bo Ryan’s updated swing offense and how it has affected Big Ten play to date.

Bad marksmanship from deep already cost Wisconsin two Big Ten home losses, when the Badgers went a combined 8-for-50 on 3-pointers against Iowa and Michigan State. Ben Brust gets most of the heat (he was 1-of-13 in those games), but starting center Jared Berggren shot 1-of-11 and has attempted 59 threes this year.

So I went digging: Berggren shoots a 3-pointer every 7:17 of playing time. That puts him ahead of the pace of Jon Leuer (7:48) and Keaton Nankivil (7:21) last season, who were both better shooters (and still shot too much from 3-point land in my estimation). All this means that you can definitely beat Wisconsin at the free throw line because the Badgers don’t draw fouls that often. It’s been that way for a good three years now.

2. The basketball corners of the internet have been debating Jordan Taylor’s slump or lack thereof. Whether it’s regression toward the mean or a true slump, what’s going on with Jordan Taylor and what should Michigan fans expect?

Expectations were a bit too high this off-season and part of Taylor’s performance is a regression to the mean as you say. Even last year, Taylor was not the quickest cat in the jungle. But after summer surgery on his right ankle, he was noticeably less than 100%. He appeared unable to make cuts to get passed defenders off the dribble, and in turn, opponents did not respect Taylor’s driving ability much at all. I believe it threw his whole rhythm off. Taylor has looked better on several occasions since he got some time off during finals week, including Tuesday’s 28-point performance. Even in the loss, Taylor toed the charity stripe 16 times, which is huge for the future because it was the first time this season that he strapped the team on his back like old times.

3. Jared Berggren was a huge question mark heading into this season. He had barely played early in his career and had to fill a huge frontcourt void with the loss of Leuer and Nankivil. How has he played and what are his strengths and weaknesses?

We knew Berggren was talented, he just needed the opportunity. He is second on the team in scoring and has shown a really nice shooting touch, even if he does hang around the perimeter too much. In somewhat of an upset, one of his biggest strengths has been his defensive awareness. He leads the team in both blocks and steals! Don’t be surprised if he pokes away a couple entry passes on Sunday. On the flip side, he hasn’t progressed as much as a rebounder for some reason. But overall, he’s a major cog in UW’s impressive defense and the only threat on the block offensively.

4. Ben Brust (pictured), Josh Gasser, Ryan Evans are all guys that redshirted (Brust) or didn’t take a lot of shots last year (Evans, Gasser) but play major roles this year. Which of these players are the most important to shut down and who do you see having the biggest mismatch to exploit for and against Michigan?

The easy answer is Gasser, since if Michigan could have stopped his patented 3-point bank shot, it would have beaten Wisconsin last year. But seriously, Gasser has been quiet this year. I have been harping on Ryan Evans as the key to success this season. He’s a good rebounder and has worked hard to develop a reliable mid-range repertoire that is unique to the Badgers. If the Wolverines can get Evans into foul trouble or hassle him into another bad shooting night, I like their chances. Brust is very streaky. You are not the first to not know this, but Brust didn’t redshirt last year — he just wasn’t good enough on defense to play. If he’s on, he’s on and he’ll shoot them from 30-feet out, so there’s not much you can do there.

I think the match up Wisconsin must exploit is Berggren-Morgan. For Michigan, whomever Evans does not guard — Hardaway or Smotrycz — could have a good day.

5. Back to back home losses at the Kohl Center are unheard of in this conference. What’s going on in Madison and is it a true cause for concern?

I am not alarmed yet. It sucks, but the poor shooting and Taylor still rounding into shape are understandable — and temporary — problems in my mind. The true cause for concern, if any, if the apparent regression of Mike Bruesewitz. He has not handled the promotion to a starting gig very well, alternating between foul trouble and anonymity. For the Badgers to be themselves, they need their junkyard dog back.

6. Wisconsin is the only Big Ten team that John Beilein hasn’t beaten at Michigan. What’s the number one reason why?

The #1 reason is because Gasser banked in a 3-pointer against him last year. I think that’s the only honest answer.

7. Is this the game that finally snaps the streak? Let’s hear your predictions for how the game will play out.

The #2 reason Beilein hasn’t beaten Wisconsin is that UW has been the superior program so far during his tenure. But Michigan has seemed to turn a corner — in recruiting, expectations, player development, etc. With Wisconsin struggling with its shot selection, now is the time to catch them.