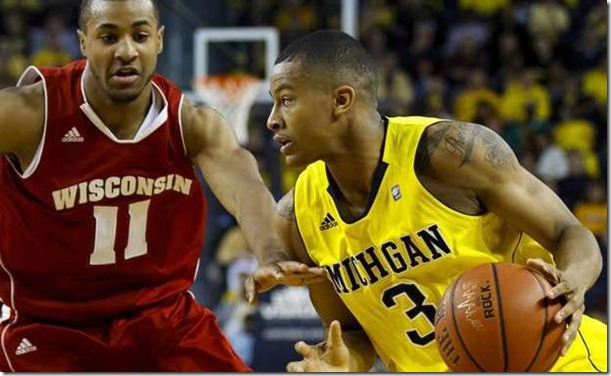 Michigan has suffered its fair share of agonizing losses to Wisconsin over the past six seasons. The Wolverines saw almost every version of the script during their 10 game losing streak against the Badgers. Michigan experienced the wrath of a Wisconsin offense operating to near perfection, failed to score 20 points in either half of a Big Ten tournament game , watched a handful of once promising upset bids fall short at the Kohl Center and, most recently, felt the heartbreak of a buzzer beating defeat. Given that recent history, there’s no more satisfying way to beat Wisconsin than how Michigan won this afternoon. Michigan beat Wisconsin – handily – at its own game.

Benches aren’t emptied in the closing minutes of many Big Ten games and the fact that Beilein had the luxury to empty his emphasizes what a dominating performance this was. Michigan not only defended Wisconsin better than any team this season, it scored the ball more efficiently against Wisconsin than any team has all season. The Wolverines scored 1.09 points per trip against one of the best defenses in the country while holding the Badgers to a meager .76 points per possession.

Nothing was easy for the Michigan offense but it was able to manufacture enough positive possessions. The Wolverines made 45% of their twos and 27% of their threes for a 44% effective field goal percentage against the NCAA’s best shooting defense. Despite the mediocre appearance of those numbers, they are all better than the average shooting numbers that Wisconsin has allowed this season. Michigan’s offense prevailed by over-performing in two areas where the Badgers typically excel and Michigan usually struggles. The Wolverines crashed the glass – rebounding 43% of their misses for 13 second chance points – and got to the free throw line 20 times. Michigan didn’t turn the ball over and only scored 20% of its points from the three point line.

I wrote in the preview that Michigan couldn’t beat the Badgers in a shootout and that defensive stats would be the ones to pay attention to. You can’t defend Wisconsin much better than Michigan did today. This was by far the most consistent, disciplined and effective team defense that the Wolverines have played all season long. Michigan had a good plan and was able to mitigate Wisconsin’s bigs inside without surrendering many open threes.

Michigan’s field goal defense spearheaded the entire effort and Wisconsin rarely had uncontested opportunities from the field. The Badgers made 29% of their twos, 35% of their threes for a 38% effective field goal percentage. Michigan wasn’t great on the defensive glass, allowing Wisconsin to rebound 33% of its missed shots, but did force the Badgers to turn the ball over. This was the first time that Wisconsin turned the ball over on over 20 percent of their possessions since last year’s NCAA tournament and Michigan was able to play aggressive defense without fouling. The Badgers attempted just five free throws on the day for a free throw rate of under 10 percent. Only Jordan Taylor (12 points on 15 shots) scored more than six points for the game.

Michigan sits at 3-1 in the Big Ten with games against Northwestern and at Iowa on the docket for the next week. Both are games that Michigan should win but the Wolverines will have to be careful to focus on the task at hand rather than letting their eyes wander ahead to a Tuesday night date with Michigan State at Crisler Arena.