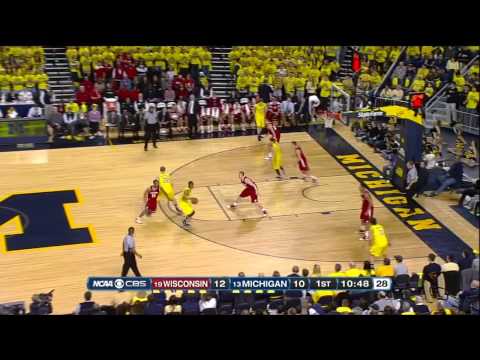 Michigan methodically opened up a 10-2 lead over the first seven minutes of play but Wisconsin answered in a flash. In two minutes of clock time the Badgers scored ten straight points and forced John Beilein to burn a timeout. The Badgers had stolen back momentum and effectively silenced the Crisler Center crowd. The Wolverines responded with a great set play out of the timeout. The play was designed for Stu Douglass – who has now hit seven of his last ten threes – and he knocked down the big shot. First, Trey Burke took a ball screen from Blake McLimans and drove down the right side of the lane, attracting two defenders. As McLimans rolled to the basket, he set a down screen on Douglass’s defender. Douglass had more than enough space to pop out to the three point line, set his feet and bury the three point shot. Douglass’s shot reignited the crowd while providing a sense of confidence that Michigan could answer whatever runs Wisconsin threw its way.

With a 25-19 halftime advantage, Michigan had a decent lead but it seemed like both teams spent much of the first half just feeling each other out. Neither team really got into an offensive flow and ,at times, the game was pretty ugly. At the beginning of the second half, the Wolverines set the tone. Similar to the first half, where Michigan opened on a 10-2 run, the Wolverines opened the second half with a 7-0 run to stretch a six point lead to 13-points. It started with a gritty, hard-fought possession—the type of possession that seemed to explain this win in a nutshell. Following a Zack Novak missed three from the wing, Jordan Morgan kept the offensive rebound alive before it was finally corralled by Evan Smotrycz in the corner, giving Michigan new life for the possession. As soon as Smotrycz had control, he dished the ball to an open Hardaway, who nailed a three from the left wing. Hardaway got on the board again a couple possessions later, drawing a foul on the fast break and hitting two free throws. Moments later, Jordan Morgan took a page out of Wisconsin’s book with an offensive rebound and put-back off of a Trey Burke miss in transition. The bucket brought the crowd to its feet and Michigan never really looked back from there.

3. Trey Burke’s highlight-reel plays midway through the second half

In a span of just about thirty seconds, Trey Burke put together a little highlight reel of his own. First, off a ball screen from Morgan, Burke drove hard to the right side of the lane. When he reached the bucket, he was greeted by Wisconsin 6-foot-10 big man Jared Berggren. It didn’t matter. Burke, nearly a foot shorter than Berggren, hung in the air long enough to create enough space so he could get the shot off, then laid the ball in off the glass as he fell to the floor. Moments later, after a Stu Douglass steal, Burke had a one-on-one fast break situation. Guarded by Jordan Taylor, who many believe to be the best point guard in the Big Ten, Burke blew by him, drew the foul and hit the bucket. The made free throw following the play gave Michigan its biggest lead of the day to that point and gave the national audience watching a taste of just how good Trey Burke can be.

In his four-year career, Zack Novak had never beaten Wisconsin. On Sunday, he was going to do whatever he could to earn his first career win over the Badgers. He dove for loose balls, grabbed offensive rebounds, kept plays alive simply by tipping the ball back to a teammate — whatever it took. In the first play of this sequence, Novak snuck up on Berggren, who was attempting to post up on Morgan. Novak stripped Berggren from behind and tipped the ball out to Burke. The ensuing fast break was featured in Key Play #2, but what wasn’t mentioned in that play was that Novak was the one who kept the offensive rebound alive before the ball was tipped to Morgan, who finished with a nice left-handed lay up. In the next play featured in this clip, Novak scrapped for another offensive board, but this time he corralled it himself rather than tipping it out to a teammate. After fighting for the board and taking control of the ball, Novak drove right to the bucket and finished strong with the left hand to increase Michigan’s lead back to 14. Novak has been making plays like these throughout his whole career, and there are dozens more plays from this game that could be featured, but his intensity and hustle finally translated into a victory over Wisconsin.

Everybody likes to talk about Stu Douglass’s hot and cold streaks from behind the arc, but there’s much less discussion about Douglass’s defensive abilities. Douglass has improved his defense every year of his career and Sunday might have been the best defensive game of his career. As Burke tired, Douglass spent significant time down the stretch guarding Jordan Taylor and he tied a career high with five steals, each of which is featured in this clip. Douglass battled for every steal and he’s begun to relish the physical nature of perimeter defense. His forced turnovers alone translated into seven Michigan points off turnovers which is no small feat in a 59-41 victory. Perhaps the best play of Michigan’s season is featured in the third play of this clip. As Wisconsin’s Mike Bruesewitz attempted to crossover to his right from the top of the key, Douglass stripped the ball loose. The effort didn’t stop there. Douglass dove for the loose ball around center court and pried it just loose enough so that Novak, who also had dove on the floor, could pick it up and flip it over his head to the streaking Burke. Burke handled things from there, finishing with the easy finger roll down the floor. The play symbolized the hard work Novak and Douglass have put into this program, and it was also the perfect example of the way Michigan played as a whole in order win this game.