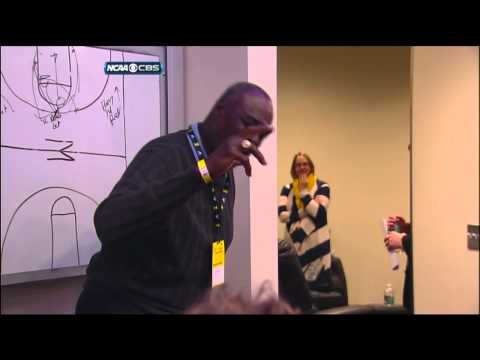 Cazzie Russell walked into Crisler Arena last weekend and barely recognized it. The House that Cazzie Built is in the process of receiving a major facelift and the first stage was made official with the dedication of the Player Development Center on Sunday afternoon. Russell, a three time All-American that led Michigan to three Big Ten titles and two Final Fours, was recently inducted in the College Basketball Hall of Fame and headlined a long list of Michigan alumni in attendance at Sunday’s game versus Wisconsin and Pyayer Development Center dedication. The list of visitors included Daniel Horton, Rudy Tomjanovich, Phil Hubbard among others.  (Photo: MGoBlog/Eric Upchruch)

For Russell, it was an eye-popping experience to see the new facilities. He also said it was great to get back and see some old faces, something that was “a long time coming.” Find video and quotes from Russell, Horton and a look inside the Michigan locker room after the jump.

Russell credited athletic director Dave Brandon for setting up the reunion and said he really liked the direction that the basketball program is going. In fact, he likes Zack Novak so much that he said if he was stuck in a foxhole and could have just one person with him to try to get out, he’d pick Novak.

On the Development Center…

“You can see how it’s updated and it’s more contemporary now. Locker room, chairs, the lounge room where you can study, the whirlpool, ice pool… we had something like that but it was like go take a hot shower, and then Mr. Hunt would take a firehose and put the cold water on you, but it served the same purpose – it relaxed your muscles ”

“I’m sorry to say contemporary players, you have no excuse. You should be competing at the highest level. Your shooting, your conditioning, your running, nutrition… [pause] Come on, are you kiddin’ me? Nutrition! We didn’t know anything about nutrition. All we knew was eating steak on the day of the game, which, by the way, doesn’t do any good until the day after anyway.”

“It’s good to see this, because at this level, you need all they have to compete. This is great. I don’t want to sound ungrateful, but if they could throw the time back a few years, you know, we could start now. Oh boy. That’d be fun. But this is good to see. I think it’s a long time coming and we’re happy to be a part of it.”

On the facilities during his day…

On reuniting with former players…

“It’s a real blessing. I don’t know if they got some revelation. I’ve been asked these questions for years. Why don’t we go back… This is a long time coming. I think it’s great that they’ve reached out. I was really moved to come back. Maybe this will help fuel the desire to come back (for other players who didn’t come) and know that they are interested in reminding us that we’re part of this great tradition, great history.

“For me this is more than just about the Crisler renovation this weekend. This was about bridging the gap and networking…letting them know, we still remember you as a part of this rich tradition.”

“That’s very humbling, especially when you think about the gift God gave me to play, and here I am now, being inducted into the College Basketball Hall of Fame.”

“For me, it’s just great, very humbling because I had a lot of great teammates…it’s good to feel like you’ve had some impact on the game. You look back over and see all these pictures and say, ‘Oh yeah, I was in shape back then.’ ”

“My relationship with Coach Beilein is pretty good. He called me to congratulate me on the Hall of Fame, and he said that he would be there. He said he would be there, and I expected him to be there, but he said he’d be at Maui, so I told hiim I didn’t expect him to choose Kansas City over Maui.’

“We talked a little bit, he’s really a straight shooter. I’ve met a lot of coaches that are not particularly straight shooters, you just see right through them. But I’m praying for his success because he is really a genuine guy who is concerned about this rich tradition and history. It seems like he’s on course to bridge that gap and bring guys back, which can help.”

On the state of the program…

“It’s good to see them back, good to see them playing well. Michigan needs to be near the top because of the kind of tradition and history we have. We’re used to being up there. It’s no fun being at the bottom. I’m a terrible, terrible loser. But I’ve kinda housed that, try to smile. But I want to beat your brains out if you’ve got a different color uniform. That’s what you gotta have.”

Daniel Horton had his own memorable wins over Wisconsin during his career, from 2002 through 2006, and was also in attendance for the dedication. Horton has played professionally all over the world since graduating six years ago. He’s played in Turkey, France, Cyprus and even had a short stint with the Miami Heat in 2007. After taking a year off due to injury, Horton will be leaving for Australia in February to continue his professional career. Here’s video of what Horton had to say about his experiences at Michigan and overseas, and his thoughts on the new Crisler Center.

Russell also gave Michigan a little extra motivation before the game by popping in to give a quick pregame speech. CBS also had its cameras in the lockerroom and provided this footage on the broadcast: