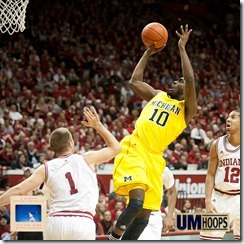 Michigan has only played four Big Ten games but we’ve learned as much or more about this team during the first two weeks of Big Ten play than we did over two months of non-conference play. The Wolverines sit at 3-1 in conference play but their three wins are over teams that currently sit in the bottom third of the league standings. Here’s a rundown of observations, notable improvements, predictions and warning signs going forward into Big Ten play.

Michigan plays Wisconsin (home), Minnesota (home), Iowa and Nebraska just once this season and those four teams sit at the bottom of the current standings. Wisconsin will improve, Iowa is better than it appeared in preseason but Minnesota is reeling and Nebraska is likely to reside in one of the league’s bottom spots. All of that means that the Wolverines are likely to play one of the tougher Big Ten schedules when the dust settles in early March.

Sticking with the strength of schedule meme, several of Michigan’s non-conference opponents have made strides lately. Michigan’s RPI now sits at 25th with a 2-3 record versus RPI top-50 opponents. Here’s a rundown of how some of the Wolverines notable non-conference foes have fared:

Brian pointed this out yesterday at MGoBlog, and it stands out whenever I look at Michigan’s KenPom profile, but Michigan has a treacherous stretch of schedule coming up bookended by games versus Michigan State:

That stretch is just about survival. Michigan plays 8 of its final 12 games on the road and still hasn’t won a true road game this year. There are plenty of hurdles ahead despite Michigan’s 13-3 (3-1 B10) record, top-15 ranking and big win over Wisconsin.

Michigan’s defense was a legitimate concern headed into Big Ten play but early returns have been encouraging. The most obvious improvement has been the Wolverines ability to force turnovers. Michigan’s defense rarely forced turnovers in non-conference play but leads the Big Ten in forced turnover rate through four games. Michigan has forced Big Ten opponents to turn the ball over on 22 percent of their possessions and that’s been consistent through each game. All four of Michigan’s Big Ten opponents, even the turnover abhorring Badgers, have turned the ball over on at least 21 percent of their possessions against Michigan.

What’s most impressive is that Michigan has been able to force turnovers without fouling. Wolverine opponents have a free throw rate (FTA/FGA) of just 21.8%, second best in the Big Ten, and Michigan has outscored its opponents 52-27 at the free throw line in Big Ten games.

It’s still way too early for efficiency margins but Michigan’s early numbers look good. The Wolverines have outscored their conference opponents by .16 points per possession which is on par with the league’s only undefeated team, Michigan State, and behind only Ohio State – who’s outscoring its opponents by a ridiculous .32 points per trip.

A few other notable observations in the way too early efficiency margins: