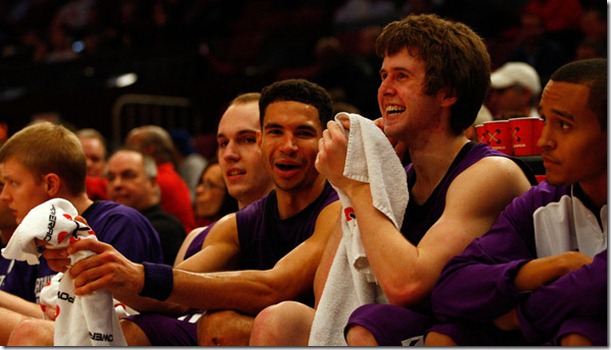 Michigan hosts Northwestern tonight in its fourth home game in five Big Ten contests while attempting to maintain its perfect record at the Crisler Center. Northwestern hasn’t fared so well of late as the Wildcats head to Ann Arbor losers of three of their last four games. Northwestern’s NCAA Tournament woes are well documented but many Michigan fans conveniently forget that the Wildcats have won three of the last four match-ups between these two teams.

Bill Carmody is in his 12th season at Northwestern so Big Ten basketball fans are more than familiar with his Princeton-style of offense. This year’s team isn’t much different. Slow tempo, lots of three point shooting, very few turnovers and essentially no offensive rebounding.  The Wildcats make 51% of their twos and 37% of their threes for a solid 53% effective field goal percentage but have struggled to make twos against Big Ten opponents. Northwestern rebounds only a quarter of its missed shots and has been even worse on the offensive glass in conference play. Only one major conference team rebounds fewer of its missed shots.

Defensively, the Wildcats have been fairly average. The one thing Northwestern has done well defensively is avoid sending opponents to the free throw line (30% FTA/FGA) but that strength has deteriorated in Big Ten play as Ohio State, Penn State and Illinois all got to the free throw line fairly easily. Northwestern’s field goal defense, 48% on twos, 34% on threes, and ability to force turnovers, 21% forced turnover rate, are all just tenths of percentage points away from the national averages. The Wildcats have struggled on the defensive glass, surrendering offensive rebounds on 34% of their opponents’ misses on the year and nearly 38% (12th B10) in conference play.

The most distinguishable difference between this year’s Northwestern team and last year’s is the absence of Juice Thompson. Thompson was a quick scoring guard that could shoot the three and seemed to play almost every minute of every game for the Wildcats. He’s been replaced by a true freshman, Dave Sobolewski, who’s been extraordinarily steady. Sobolweski is the epitome of a game manager; he rarely shoots the ball but seldom turns the ball over or makes mistakes. Northwestern can afford that lack of production (8 points, 3 assists) from the point guard spot with two of the league’s top scorers on the wings. John Shurna and Drew Crawford both average over 17-points per game and make over 40 percent of their three point shots. The duo not only accounts for over half of Northwestern’s scoring output, they also are the Wildcats best rebounders. Stopping Shurna and Crawford is the first, and most important, step toward slowing the Northewstern offense.

Reggie Hearn and JerShon Cobb split minutes at the third wing position and neither is a major offensive threat. Hearn rarely attempts shots but has been relatively efficient, 75% on twos, 36% on threes, when he does shoot. Cobb has struggled to shoot the ball, making less than 40% of his twos and 28% of this threes, and almost all of his numbers have regressed from his freshman season. Alex Marcotullio is a 3-point specialist off the bench, attempting 30 of his 37 field goals from three point range this season and connecting at a 40 percent clip.

Luka Mirkovic and Davide Curletti combine to play most of the minutes down low. Mirkovic is an old-fashioned big man that’s a strong defensive rebounder who will step out and attempt a three, but is 0-for-9 from deep on the year. Curletti is more of a finesse player, and underwhelming rebounder, but is also struggling with his three point shot having made just 3-of-14 triples on the year.

It’s hard to look at the numbers for this game and predict anything other than a three point shootout. Michigan and Northwestern attempt a greater proportion of threes than any other team in the conference and both teams have struggled to defend long range efforts in Big Ten play. To be precise, Big Ten opponents are shooting 40 percent or better from three point range against both teams. Michigan needs to be more concerned with defending the three than attacking with the three. The Wildcats made 21-of-49 (43%) threes versus Michigan last season and clearly know how to find open looks against the Wolverines. Defending the three against Northwestern is critical because Carmody’s team probably doesn’t have the weapons to beat you inside without the three.

For Michigan on offense, you’d like to see a more attacking offense. The Wolverines do have the weapons to score around the basket and are one of the top 2-point shooting teams in the country. Northwestern will probably call on a multitude of defenses to try to slow down Michigan’s attack but this isn’t the game to settle for the three. The Wolverines enter this game on the heels of one of their strongest offensive rebounding games under John Beilein and it would be encouraging to carry that production into this game against a weak rebounding Northwestern team.

Position by position, Michigan is best equipped to exploit match-ups at the one and the five: Burke versus Sobolewski and Morgan versus Mirkovic. Morgan had a career high 27 points against the Wildcats last year and is capable of finishing effectively inside against a Northwestern defense that isn’t particularly strong in the post. Burke should have some match-up advantages against Sobolewski and the combined mismatches should lead to an effective pick-and-roll attack.

Pomeroy likes Michigan in a relatively easy win, predicting a 72-63 final score and giving the Wolverines a 79% chance of victory.

Tickets for tonight’s game are $5 until 4 p.m. tonight if you buy them here with the code B1G. The Michigan football team will be honored at tonight’s game and fans can take their picture with the Sugar Bowl trophy from 5:30-6:30 p.m.

Since Michigan lost to Minnesota at home last season, the Wolverines only Big Ten losses have come by 9, 2, 1, 7 and 2 points. The only losses by more than a possession were against Ohio State.