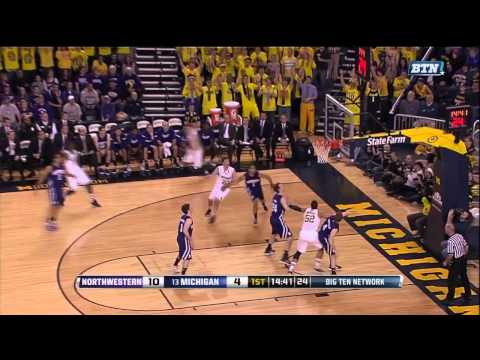 Over four minutes into the game, Michigan still had not scored and faced an ugly 8-0 deficit. The Wolverines were an awful 0-for-8 from the field and the Crisler Center was lifeless. Then Tim Hardaway Jr. took over the game and turned a 10-2 deficit into a 15-13 lead in less than three minutes. It started with a nice inbound play, resulting in an uncontested layup for an easy two. On Michigan’s next possession, Stu Douglass drove and found Hardaway open for three on the left side of the wing. Hardaway nailed it and the make seemed to breathe just a bit of life into the Michigan offense. He didn’t stop there. On Michigan’s next out of bounds play under the basket, Hardaway was open again and knocked down another three. At that point, both of Hardaway’s threes had come off of nice assists. Moments later, Hardaway proved he can create a shot on his own, too, and he drilled an impressive step-back three to give Michigan its first lead of the game with just under 12 minutes to go. Hardaway finished the game with 19 points, but without this stretch of 11 points early, there’s a good chance the Wolverines would’ve been out of this one in a hurry.

2. A Michigan run forces Northwestern to call three timeouts in under two minutes

In this span of one minute and 47 seconds, Michigan forced Northwestern coach Bill Carmody to call three of his five allotted timeouts in two minutes. Morgan opens the run, missing an easy bucket inside off of a nice pass from Douglass before grabbing his own rebound, spinning and laying the ball in with a nice baby hook. Timeout Carmody. After the timeout, Morgan made a key contribution again — this time on the defensive end — by taking a charge on the driving John Shurna. Then Burke got involved, hitting a nice jumper from the right wing to cut the deficit, which was at ten to start the half, to just two points with 12 minutes to play. On the ensuing Northwestern possession, Douglass anticipated the pass and tipped the ball away from point guard Dave Sobolewski. The play was eerily similar to Michigan’s gamechanging steal against Wisconsin as the ball ended up in the hands of a streaking Zack Novak, who finished on the other end to tie the game. Timeout Carmody. But Novak was nowhere near done at that point. After a defensive rebound by Hardaway, Michigan had a four-on-three going the other way. Hardaway found Novak at the wing, who noticed he had room to drive the baseline. Novak took just one dribble, blew past the helpless Sobolewski and threw down a powerful two-handed jam, giving Michigan its first lead of the game since the 11:53 mark of the first half. Timeout Carmody. With 10:39 to go, Michigan had reestablished itself in the game and Northwestern now had just one timeout remaining.

3. Hardaway’s three ties it while defense sends game into overtime

After Hardaway had been relatively quiet following his 11-point outburst to begin the game, he came back to life to hit maybe Michigan’s biggest shot of regulation. Down by three with under three minutes to go, Hardaway took a ball screen from Evan Smotrycz. Off the switch, Hardaway was guarded by the much less athletic Shurna and he took advantage of the mismatch. He took one crossover dribble left, gaining just enough space from Shurna, and rose up for three. There was never a doubt and suddenly the game was tied despite the Wildcats leading for the majority of regulation. In the final 2:40, defense was the name of the game. Both teams held the other scoreless, but Northwestern still had a chance to win it in the final seconds. Drew Crawford drives, while Stu Douglass plays aggressive defense (knowing Michigan had fouls to give), and runs into Evan Smotrycz and Zack Novak in the lane. There’s a lot of contact in the paint but the officials called the travel on Crawford allowing Michigan to escape to overtime.

In his last few press conferences, John Beilein has stressed the importance of offensive rebounding. In the midst of Michigan’s worst shooting game of the season, attacking the offensive glass was as important as ever. In the final five minutes and overtime, the Wolverines had two huge possessions in which they scored on the third or fourth shots of a possession. The first play cut the defecit to two points with 4:35 to play and was the sort of long, grinding possession that epitomized Michigan’s effort in this game. Offensive rebounds by Douglass (off a tip out from Hardaway), Novak and Smotrycz kept the first possession alive before Smotrycz finally secured a put-back off a miss from Burke. It was Michigan’s fourth shot attempt of the possession. In overtime, Burke collected two offensive rebounds of his own in one possession, before finally putting it back home and giving Michigan the two-point lead with 2:12 to play. In the game, Michigan scored 13 total points off of 17 offensive rebounds, while Northwestern came away scoreless off of just five offensive rebounds. In any game, that’s huge. In an overtime game, it’s even more important.

Trey Burke didn’t have his best game shooting the ball – he shot just 5-for-17 from the floor— but he still came away with 19 points and made big plays down the stretch. The difference? Free throw shooting. In overtime, Burke was 6-for-6 from the charity stripe in the final minute, and that was the difference in the game. After Burke’s final free throw attempt went through the net with six seconds to go, Michigan had a three-point lead and Northwestern needed somebody to be a hero to send the game into double overtime. Alex Marcotullio got his chance after he drew the foul on Hardaway from behind the arc, but unlike Burke, he couldn’t make the free throws when he needed to. He missed the first, made the second and was forced to miss the third on purpose. With just .3 seconds left on the clock, Northwestern’s chances were reduced to a miracle tip in and Michigan escaped with the win.