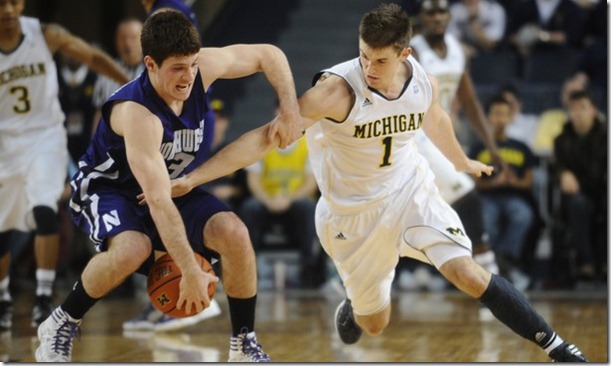 John Beilein wasn’t surprised that Michigan responded well to a tough loss at Indiana by beating Wisconsin on Sunday. Time and again he’s reminded reporters that handling success is every bit as difficult as handling adversity. Michigan’s Wednesday night match-up against Northwestern was a classic let down game with a short turnaround after the emotional home win over Wisconsin. Michigan missed its first eight shots and was behind 8-0 in less than four minutes. At that point, the Wolverines had created their own adversity and were left to spend the rest of the game digging out of the early deficit. It took overtime, and was far from aesthetically pleasing, but when the dust settled Michigan had grabbed its fourth Big Ten win in five tries.

Michigan struggled to shoot the ball early and never warmed up. This was the worst shooting performance of the season for the Wolverines by a large margin. Michigan made just 42% of its twos and 23% of its threes on the night for a 33% effective field goal percentage. That’s 10 percentage points worse than the previous season low (43% vs. Wisconsin) and this was the first game that Michigan won with an effective field goal percentage under 40% since 2008 (a 49-43 home win over Illinois).

Despite the horrendous shooting, Michigan was still able to surpass 1-point per possession due to what can only be described as sheer determination. For the second game in a row, offensive rebounding was the differentiator for the Wolverine offense. Michigan rebounded 38 percent of its missed shots and scored 13 second chance points in the second half and overtime. Michigan further maximized possessions with just a 10.9% turnover rate and attempted 18 more field goals than Northwestern. As in any comeback, free throw shooting was critical and Michigan made 15-of-16 freebies including six critical makes in the final 65 seconds of overtime by Trey Burke.

Despite the strong offensive rebounding effort, it was the Michigan defense that pulled through in the end. John Shurna and Drew Crawford combined to score 41 points on 31 shots but their teammates had just 23 points. Michigan’s defense was far from consistent, allowing numerous open shots for long stretches, but it did two things very well for the entire 45 minutes: force turnovers and grab defensive rebounds. Michigan rebounded 79% of the Wildcats’ misses while forcing turnovers on a quarter of the their possessions. In consecutive games, the Wolverines have forced two of the country’s most disciplined teams into an unusually high number of turnovers.

The Michigan defense truly excelled in the final eight minutes of regulation. The Wolverines trailed by four at the eight minute media timeout and surrendered just four points and zero field goals before the end of regulation. Michigan’s offense sputtered to the finish line but that late defensive effort was enough to extend the game to overtime.

Bill Carmody seemed to make a lot of great coaching decisions in this one, many of which John Beilein and Michigan didn’t seem to have an answer for. The small starting lineup, with Shurna at the five, was a nice wrinkle early and once Novak sat with two fouls it was nearly impossible for Michigan to guard. The hard hedge on the pick-and-roll gave Trey Burke fits as he was unable to pass around or through it to the rolling man. Burke actually had the best luck rejecting the screen and taking the ball to the basket in the other direction. Carmody also seemed to mix up his defenses extremely well, most notably going with the 1-3-1 zone on the final possession of the first half and leaving Michigan befuddled. (Photo: AnnArbor.com)

The Big Ten is a grind and no win is a bad win. Michigan shot the ball terribly but didn’t panic and simply outworked Northwestern down the stretch. That’s an encouraging sign. I think we’re all pretty confident that Michigan could beat Northwestern while playing its best game, but teams that want to compete in this league need to win games when everything doesn’t go their way. Next up for Michigan is a chance at its first road game of the season with a Saturday afternoon game at Iowa.