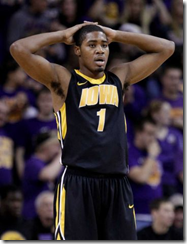 Michigan’s recent trips to Carver-Hawkeye Arena have been anything but routine. Not only have the last three meetings gone to overtime, they’ve seen more than their fair share of drama. Manny Harris was benched in 2009, DeShawn Sims played late-shot hero in 2010 and Jordan Morgan, a career 53 percent free throw shooter, hit two free throws last year to send the game to overtime. Michigan has been a better team than Iowa for the last three years, winning seven of eight match-ups, but the Wolverines will be in for a fight in Iowa City.

Iowa has had its fair share of disappointing results – losing to Campbell at home stands out – en route to its 10-8 (2-3 B10) record this season but also won a pair of Big Ten games on the road, at Wisconsin and Minnesota. Those are the same two teams that won at Purdue and Indiana last night. Most recently the Hawkeyes have suffered a pair of blowout losses, at home against Ohio State and at Michigan State, by 63 points combined. Safe to say, it’s tough to decipher exactly what to expect from this Iowa team on any given day but they are capable of stringing together a strong performance.

Win or lose, Iowa loves to run and this presents an interesting dilemma for Michigan. The Wolverines have had recent conference success while slowing games down – the last four meetings with Iowa were all 64 possessions or fewer – but have also had success playing at a faster pace from time to time this season. There will be opportunities for Michigan to run off turnovers and rebounds and the Wolverines need to take advantage but also need to be careful to not let things spiral out of control on the road.

Iowa’s statistical profile has seen a jarring shift since entering Big Ten play. The pair of blowout losses have certainly had an effect but some of the shifts are startling. In Big Ten play, the Hawkeyes have been plagued by turnovers, poor shooting inside and out, terrible two point defense and defensive rebounding. Those trends have to be disappointing for Hawkeye fans after their three greatest strengths in non-conference play were avoiding turnovers, not fouling (the one trait that has stuck) and cleaning up the defensive glass.

Offensively, almost all of Iowa’s scoring comes inside the arc. The Hawkeyes score 59 percent of their points inside the arc and another 22 percent at the free throw line, seldom relying on the three point shot. That’s good news for a Michigan defense that has been significantly more effective defending the two than the three. Michigan must be careful not to foul as Iowa’s quick attacking style yields a high number of free throw attempts. Turnovers were a strength in the non-conference but have unraveled the Hawkeyes in their last two games. Iowa turned the ball over on well over a quarter of its possessions in those losses and surrendered 55 points off of turnovers in the last two games.

Defensively, Iowa gives up its fair share of easy looks. Hawkeye opponents are making 51 percent of their twos (58% in Big Ten games) and 35 percent of their threes for an effective field goal percentage of 52 percent. The Hawkeyes will pose an interesting test for a Michigan team that has suddenly been more proficient on the offensive glass than we’ve seen under John Beilein. Michigan must be careful not to send too many bodies to the offensive glass while sacrificing transition defense. Open looks will be there for Michigan but the Wolverines have to knock them down and enter this game on the heels of their two worst shooting performances of the season.

Ken Pomeroy likes Michigan by a score of 72-68 but gives Iowa a 33 percent shot at the home upset. Michigan’s captains are well aware of what can happen at Carver-Hawkeye after playing three overtime games there so it will be interesting to observe Michigan’s focus throughout the game. The Wolverines have yet to win a road game and this is a great chance because nothing will come easy over the next couple of weeks. Stylistically, Wisconsin, Northwestern and Iowa present such radically different challenges that Michigan will have to adapt quickly. Transition defense, defensive rebounding and hitting threes are the most important statistics to watch for the Wolverines in this one.

Zack Novak, Stu Douglass and Matt Gatens have already faced off eight times over their first three years of college. While Novak and Douglass are 7-1, Gatens has put up the better numbers averaging 11 points and four rebounds per game against Michigan.

John Gasaway says Trey Burke is the seventh best freshman in the country and wonders aloud whether he’s the top point guard in the Big Ten.

Grantland.com’s Shane Ryan was at Michigan’s game versus Northwestern and provides a unique outside look at the program. I don’t agree with his urban decay description of Ann Arbor but he makes up for it by including a quote from yours truly.

Michigan commitments Nik Stauskas and Mitch McGary will both be on ESPN/U on Sunday. Stauskas at 2 p.m. on ESPNU and McGary at 4 p.m. on ESPN. We’ll likely have an open thread and other coverage.