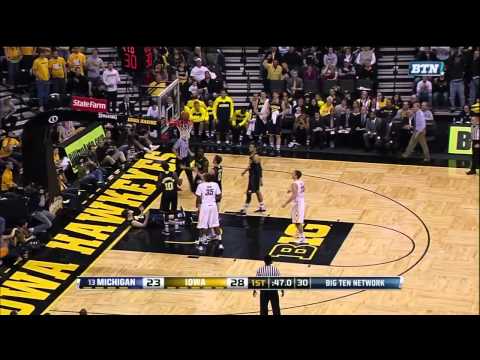 The end of the first half and start of the second half are probably the most common sequences in this Five Key Plays series. With under a minute to play and after playing one of its worst halves of the year without its start point guard, Michigan is only down five points. This stretch starts with some solid position defense by Zack Novak but Michigan fails to corral the defensive rebound. Devon Archie grabs the board and kicks the ball to Devyn Marble who does a great job of getting it to Matt Gatens on the wing. Morgan, aware of Gatens as the primary Hawkeye three point threat, closes out in an out of control fashion. Vogrich slides in with help defense and is as close to drawing the charge as the ball is to rolling off the rim. The end results is a three point play and a five point swing. Michigan comes up empty on the other end with Tim Hardaway Jr. missing a three and Marble comes down and makes a big time play with the crossover step back jumper comfortably over Eso Akunne’s hands.

2. Hardaway begins to attack the basket

This stretch is the start to what was really Michigan’s only real run of the game. The Wolverines trail by 13 to start the stretch when Hardaway finally gets comfortable slashing toward the basket. He catches the ball on the wing during the first two plays, puts his head down and goes to the hole. He gets fouled on both plays but splits the free throws on both. That’s the sort of day it was for Michigan where every good play seemed to be followed by a negative. His dunk in transition cuts the lead to nine and starts to provide a little bit of hope that Michigan might actually have a chance to get back in the game.

This stretch comes on the heels of Hardaway’s strong play earlier in the half and is the moment when it truly feels like this game is Michigan’s for the taking. The theme is consistent, Michigan making things happen by pushing the tempo. First Trey Burke takes a pull-up jumper that rims out before Blake McLimans secures the offensive rebound and puts the ball back. Then Michigan goes 1-3-1 zone and comes up with a stop. Hardaway beats everyone down the floor and Burke does a great job of finding him for the layup attempt, which rims out. Hardaway does make his free throws but this is as close as Michigan would get.

4. Iowa answers Michigan run with 7-0 run of its own

Michigan had cut the lead to six points before the 12 minute time out. That’s as much of a game as you can ask for after trailing by double digits at halftime. A stop on the first possession of this clip and Michigan is in the game. A little bit of screen-and-roll action results in Melsahn Basabe rolling to the basket with Zack Novak sliding in to attempt to take the charge. The call doesn’t go his way and Michigan comes up empty on its next two possessions and Iowa makes them pay by pushing the ball off of missed shots. Bryce Cartwright is the catalyst of the Iowa break as he does a great job of finding Matt Gatens in the corner for a three and then penetrates the lane easily to dump the ball off to Basabe for a dunk. Just as quickly as the Wolverines had fought their way back into the game, they were down 13 points again.

This play pretty much sums up the game for Michigan. A last ditch effort was starting to mount and Michigan plays some pretty decent defense and forces Bryce Cartwright into a desperation three. Vogrich appears to have control of the long rebound and ready to go on a two-on-one break with Trey Burke to potentially cut the lead to single digits. Zach McCabe simply out hustles him to the ball – McCabe ends up on the floor, Vogrich remains on his feet – and Iowa gets the ball back. The ensuing possession ends with a Matt Gatens three that ices what little hope of a comeback Michigan was clinging to. Iowa beat Michigan to loose balls like this one all game and always seemed to come up with the critical big shots.