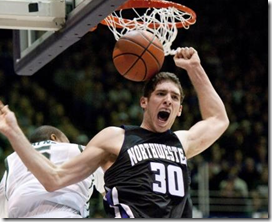 We teased a tempo free efficiency margin table last week but now that we are roughly one-third of the way through conference play, it’s time to start with our weekly Big Ten Roundup feature. First we take a tempo free look across the league and then hand out superlative honors from performance of the week to game of the week.

Ohio State has already been upset twice in this young season, causing many to question its Big Ten title qualifications, but the Buckeyes have proven their ability to crush lesser opponents. Ohio State touts a defense that’s simply unmatched by other league foes and an offense that’s not far behind.

Efficiency margins suggest that the Buckeyes’ toughest competition might be Tom Izzo’s Spartans. One year removed from having the league’s second worst offense, Michigan State is scoring the ball more effectively than any other Big Ten school.

As for Michigan, sterner tests lie ahead. It remains to be seen whether the Wolverines needed to start 5-1, but there aren’t many easy opportunities left on Michigan’s schedule. Michigan has played the second weakest league slate to date (HT: KenPom) and still has two games left against Ohio State, Illinois, Michigan State and Purdue. Michigan has been more efficient than many of the teams near its spot in the standings but some trepidation will remain until the Wolverines can knock off some of the conference’s top dogs.

The cloudy midsection of the Big Ten is going to take a while to sort out. Illinois is tied with Michigan State in terms of wins and losses but hasn’t proven to be elite offensively.  Purdue can score but has struggled to get stops while Wisconsin’s defense is better than anyone other than Ohio State and its offense has sputtered.

Defense is missing in action in Bloomington as the Hoosiers have the worst defense in the league by a wide margin. In fact, Indiana is only surrendering .01 points per possession less than it did in Big Ten games last season. The offense is improved but the Hoosiers will struggle to win league games consistently without improvements on the defensive end of the floor.  – Dylan Burkhardt

Paul shot a ridiculous 80 percent from behind the arc (8-of-10) and was 11-for-15 from the field overall. He was 13-for-15 from the charity stripe and scored the most points in a Big Ten game since Glenn Robinson scored 49 in 1994. After the game, Paul said he’d never scored that many points in any game and his 43 points were nearly 30 points more than his season average of 13.8. His eight made threes, more than he’d made in the Illini’s four previous games combined. His standout performance came at the perfect time for the Fighting Illini, who now stand at the top of the conference standings. – Kevin Raftery

Surprise of the Week: Minnesota 77, Indiana 74

Minnesota’s 77-74 victory at No. 8 Indiana. Raise your hand if you saw this one coming. Now put your hand down, because you’re lying. Big Ten cellar-dweller Minnesota came into this one winless in the conference, while Indiana had yet to lose a game at Assembly Hall. Until Tuesday. Sophomore Austin Collins poured in a career-high 18 points, and the Golden Gophers proved that it really is true that anyone in the Big Ten can beat anyone else on any given night. You just never know. – Kevin Raftery

Illinois beats No. 5 Ohio State, 79-74. It’s tough to beat any Big Ten team on the road, especially when the home team has a player who scores 43 points on just 15 field goals, as was the case for Brandon Paul. Still, it was a very impressive win for the Illini, who now sit at the top of the conference standings in a tie with Michigan State. Ohio State dropped to 4-2 in the conference and is now in a tie for third with Michigan. – Kevin Raftery

Before Saturday afternoon there was talk that, if things broke the right way, Michigan and Michigan State could renew their rivalry on Tuesday as top ten teams. Winning on the road in the Big Ten is as difficult is at gets but watching Michigan struggle to muster any offense against Iowa and Northwestern shred the Spartan defense, it was tough not to wonder whether the Michigan teams were looking ahead to Tuesday. – Dylan Burkhardt

The reserve center started just his second-career game on Saturday and he didn’t disappoint in Northwestern’s 81-74 victory over No. 7 Michigan State. While Drew Crawford and John Shurna had seemingly typical 20+ point performances, it was Curletti whom Tom Izzo said was the difference in the game. Curletti, who graduated from Orchard Lake St. Mary’s (MI), finished the game with a season-high 17 points and six rebounds in the Wildcats’ first signature win of the season. – Kevin Raftery

Upcoming Game of the Week: No. 7 Michigan State at No. 13 Michigan

Michigan and Michigan State both lost on Saturday but this is still a big game and for reasons beyond the typical rivalry implications. At 4-1 in Big Ten play, the Spartans sit atop of the conference standings alongside Illinois but the Wolverines are just a game back at 4-2. A win on Tuesday and Michigan is knotted up in the standings with Michigan State. A Michigan State victory would be their third in conference play and second over a team expected to finish in the upper half. Of course, there’s also the fact that Michigan swept the Spartans last season for the first time in over a decade.  – Kevin Raftery

Be a fan of Coast to Coast Tickets on Facebook for discounts you can use towards sports tickets and Big Ten tournament tickets!