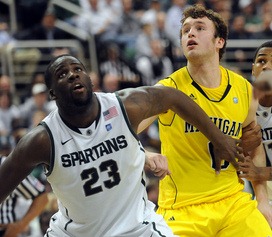 A big rivalry game demands an opposition Q&A and we had to call on a retired blogger for this one. KJ started the illustrious Spartans Webblog, now The Only Colors, around the same time as this site and while he’s no longer actively blogging, he still knows his hoops. KJ and I exchanged questions about our respective teams and you can find my responses at The Only Colors and his responses below.

There were a lot of questions about this Michigan State team before the season but up until Saturday afternoon it seems like almost everything has gone according to plan. Talk to me about two of the biggest question marks before the season: Keith Appling at the point guard and Adreian Payne and Derrick Nix down low.

In both cases, there have been some bumps in the road, but the overall results to date have been quite good. Appling struggled out of the gate as the primary point guard, failing to record a single assist in MSU’s first three games vs. quality opponents (UNC, Duke, Florida St.). Since then, though he’s hit the 7-assist mark five times, including games against Gonzaga and Indiana. Meanwhile, he’s scored at least 14 points in all six of MSU’s Big Ten games to date. Early on, the focus was getting him as many scoring chances in transition as possible, as he was really struggling with the ball in his hands in the halfcourt offense. More recently, he’s become a much more reliable option creating offense later in the shot clock. In particular, he was the key to hanging with Wisconsin in Madison during the second half when Draymond Green had to sit due to foul trouble.

At the other end of the lineup spectrum, Payne and Nix have combined to form an able, and arguably more versatile, replacement for the prematurely-retired Delvon Roe. The two players are combining to contribute 14.5 points, 8.6 rebounds, 1.5 blocks, and 1.6 steals in 35.6 minutes per game. While there are still moments of inconsistency, particularly against smaller, more perimeter-oriented big men, that’s about as much production as you can expect from the 5 spot when Draymond Green is filling the 4 spot. Nix’s much improved conditioning has been a key in terms of maintaining that production.

How do you stop Draymond Green? He strong four man that can play inside-out, he seems a prototypical mismatch for Michigan’s undersized lineups but has struggled in the series (… as you pointed out in your interview: 6.0 points and 3.8 rebounds per game in 5 career games vs. Michigan.) His numbers show that he’s significantly more effective outside (40.7% on threes) than inside (44.6% on twos), is that accurate and does taking away the three point shot slow down the rest of his game?

Green’s propensity to drift outside has been a topic of intense debate among the MSU fanbase. I fall toward the side that 3-4 three-point attempts per game by Green are a good thing. As successful as he’s been over the last 3 years, we tend to forget he’s still an undersized power forward who’s not necessarily going to be able to impose his will in the post against high-level opposition. By taking a few three-pointers every game, he sets himself up to also take advantage of the quickness advantage he usually has against traditional power forwards.

While he’s struggled at times as the go-to scorer for MSU, overall I think Green’s been about as effective as we could ask him to be scoring the basketball. His shooting numbers are in line with where they were last year, and have improved as the season has progressed after a couple really bad shooting nights vs. UNC and Duke to start the season (combined 10-34). Since then, when he’s had poor shooting nights, he’s usually compensated by getting to the line more often. Tuesday night, he’ll need to find the right balance on offense, adjusting for whether he’s being guarded by Evan Smotrycz (look to shoot/drive from the outside more) or Zack Novak (get thee to the low block!).

I keep hearing, and my eyes tell me the same thing, that this is more of a "vintage Tom Izzo team". When I look at the numbers there are only a couple things that stand out as noted improvements from a season ago: two point offense and three point defense. What do you see as the major differences?

I think the single biggest difference is something I’ve always harped on as being a key for Tom Izzo teams: depth. MSU has eight players averaging at least 17 minutes per game, and Izzo has used an 11-man rotation at times (not so much in Big Ten play, though). Last season, Izzo struggled to find bench players he could trust beyond the starting lineup. The enhanced depth this season has given Izzo more flexibility to pull guys who are struggling on either end of the court without diminishing the level of talent on the court.

The result has been more balanced scoring, with Nix/Payne providing a low post option and Appling, Brandon Wood, and Branden Dawson looking to attack the lane from the perimeter (with Green as the floater). That’s driven the uptick in two-point shooting, with three-point shooting following along more recently (42.6% in conference play).

Defensively, the perimeter defense has been much more cohesive. Kalin Lucas was a good, but not great defender, while Durrell Summers and Korie Lucious struggled with defensive lapses throughout their careers. The new perimeter group (including a much more efficient Austin Thornton) has adapted much better (and quite quickly) to Izzo’s hedging/rotating scheme, preventing good looks from beyond the arc.

The Spartans seem to be deadly when pushing the ball in transition and a lot of that is due to Keith Appling. How much of Michigan State’s offense relies on pushing the ball of misses and turnovers this season?

This is another area where increased depth has played a positive role. MSU can push the ball more consistently on offense without worrying so much about fatigue. Additionally, the new batch of MSU guards (Travis Trice, in particular) has a higher propensity to steal the ball, creating opportunities going the other way.

Appling has emerged as perhaps an even more efficient player in transition than Lucas was, contributing to his 52.3% two-point percentage and 53.1% free throw rate. The transition offense may be negated in this game as Michigan takes care of the ball well and doesn’t look to crash the offensive boards with a lot of bodies, preferring to get back on defense, but at minimum it puts some pressure on the defense early in the shot clock.

There are a lot of new faces on Michigan State’s roster this year. Fifth year transfer Brandon Wood, freshman forward Branden Dawson and point guard Travis Trice appear to be playing the largest role this season. What’s the low down on this trio and who should Michigan worry about?

One of the oddities of MSU’s overall surge in production on both ends of the court this season has been that it hasn’t required extraordinary contributions from any of those three newcomers. Each has made key plays at time, but none of them have put up eye-popping numbers. Wood has helped carry the offense on several occasions when others were struggling early in games, but is averaging a modest 10.1 points per game (modest compared to the 17 points/game he averaged at Valparaiso, at least). Dawson has displayed his enormous physical talents in transition and on the boards, but has also struggled on defense at times. Trice, meanwhile, has flashed his perimeter shooting (44.0% from beyond the arc) and passing skills, but has posted a pedestrian 38-29 assist-turnover ratio to date.

I think the top priority for this trio Tuesday night will be guarding Trey Burke and Tim Hardaway, Jr. as closely as possible. Beyond that, look for one or two of them to provide an offensive spark during a few stretches in a supporting role to Appling and Green.

On Friday there was talk that this could be a rivalry match-up featuring two top ten teams, then Michigan and Michigan State were both upset on the road. Were any chinks in the Michigan State armor exposed on Saturday other than just how hard it is to win on the road in the Big Ten?

MSU’s inexperience was definitely exposed on defense vs. Northwestern, as the Wildcats scored 1.26 points per possession. Prior to that game, MSU had only allowed three opponents to even get to 1.00, and no opponent had exceeded 1.07. My hope is certainly that this was a one-time disturbance in the force–John Shurna, Drew Crawford, and Davide Curletti made some outstanding plays–but the baskets off back cuts the Wildcats converted will provide something of a blueprint for Michigan. The MSU defenders will have to adjust and perhaps pull back somewhat in terms of the aggressiveness they’ve shown on the perimeter to date.

What’s the one stat that we can look for on the box score by the end of the night Tuesday and know who won the game?

I’ll go with what’s perhaps the simplest answer in any basketball game: two-point shooting percentage. MSU should win the rebounding battle (ranking in the top 20 nationally on both ends of the court), and Michigan should have an advantage in the turnover department (although perhaps a smaller one than in previous seasons). Absent one team getting red hot from three-point range (I can only hope Zack Novak’s performance in East Lansing last year was a singular event), it’ll come down to who can force the other team to take less efficient shots in the halfcourt offense. For MSU, that means keeping Hardaway (55.3% on twos vs. 28.6% on threes) and Burke out of the lane. For Michigan, that means limiting the quality shots MSU gets around the basket due to its size advantage.

These are two very good offensive teams, but this rivalry always seems to translate into a physical grind-it-out affair. I expect nothing different tomorrow night.