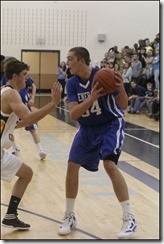 We posted video of Mitch McGary, Nik Stauskas, Derrick Walton and Zak Irvin in the last 48-hours. Click their name or picture to watch footage of each player.

In this week’s Recruiting Roundup we keep things short and simple while looking at the week that wise for Michigan’s 2012 and 2013 commitments, a number of which played in high profile and tournaments and showcases across the country.

Robinson had 22 points, nine rebounds, four assists and two steals in a 74-54 win over Crown Point as opposing fans chanted “Daddy’s better”. Lake Central also knocked off Highland, 80-51, on Monday and Robinson had 26 points and eight rebounds after being honored as the program’s all-time leading scorer in pre-game.

Stauskas had 16 points in a 10 point victory over Friends Central at the Hoophall Classic on Sunday. He also added 15 points in a blowout (70-33) win over Roxbury and St. Mark’s cruised to a win over Middlesex but stats were unavailable.

McGary had three points in Brewster’s win over Tilton while facing one of the nation’s best defensive players in Nerlens Noel.

Irvin was impressive at the Flyin’ to the Hoop Invitational alongside his teammate, Michigan State commitment Gary Harris. Irvin had 26 points including five three pointers and some big dunks. Rivals.com’s Corey Albertson was extremely impressed:

The four-star junior shot lights-out on Saturday afternoon as he made all five of his three-point attempts on his way to a game-high 26 points. The Michigan commit hit threes off the dribble, off of screens and by spotting up with a smooth stroke and confidence. Irvin also displayed some of his signature bounce by throwing down two alley-oop dunks off of set plays. The 6-foot-5 wing was active on the defensive end, where he recorded four rebounds, two steals, and a blocked shot.

Donnal and his Anthony Wayne squad was profiled in the Toledo Blade, an excerpt:

Perhaps no one on the team has bought in to the new approach more than Mark Donnal, the 6-9 junior who is already committed to the University of Michigan. The league’s top post player is averaging a team-high 20.4 points and 8.7 rebounds after averaging 15 points and seven boards last season.

Donnal, who probably receives more double-teams near the basket than any other player in the NLL, is sinking 79 percent of his shots from the field, as well as from the foul line.

“Mark has been a big asset for us, there’s no doubt about that,” Borcherdt said. “He’s been very effective. He takes good shots. He’s a good free-throw shooter. He’s making other people around him better.”

Donnal had just seven points in an overtime loss to Bowling Green after scoring 36 points against the same team earlier in December. Donnal had 18 points earlier in the week in a 75-65 loss to Napoleon.