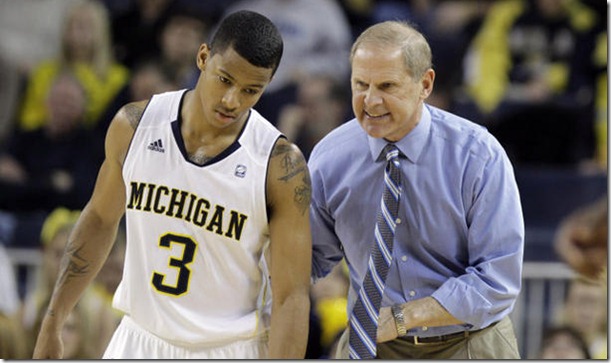 Michigan and Michigan State face off as ranked foes for the first time since 1998 in a game that could be a turning point in both seasons. Both teams are a half game apart at the top of the Big Ten standings but enter the game on the heels of deflating road losses. Tom Izzo reiterated that tonight’s game “isn’t life or death”, but at this point its tough to ignore the importance of this rivalry matchup for both programs. The Spartans look to avenge the Wolverines’ sweep a season ago whereas Michigan players point out that they are hungry to prove last season “wasn’t a fluke”.

There were questions about this Michigan State team headed into the season but after 18 games it’s pretty clear that Tom Izzo has righted the ship in East Lansing. The Spartans are 15-3 on the season and have improved in almost every statistical category from a season ago and rattled off a 15 game winning streak after losing their first two games – against North Carolina and Duke on neutral sites.

Offensively, this is a vintage Michigan State team and you should know what to expect if you’ve watched the Spartans over the last decade. Izzo’s team is dominant on the offensive glass, rebounding 39% of their missed shots, and is generally solid in each of the other three factors. They aren’t the best shooting team but they are more than adequate inside (52%), where they take roughly three out of every four shots, and outside (36%). One-third of the way through the Big Ten season, Michigan State is the most effective offense in the conference, scoring 1.15 points per possession in conference games. After sputtering out of the gate, failing to surpass 1 point-per-possession in four of its first five games, Michigan State has scored at least one point-per-trip in all but one (an overtime win at Wisconsin) of its last 13 games.

Michigan State is no slouch on the defensive end of the floor either. The Spartans rank 9th in Ken Pomeroy’s adjusted defensive efficiency ratings and do a great job at the two most important elements of defense: field goal defense and defensive rebounding. Opponents make just 42% of their twos and 30% of their threes against the Spartans and rebound just 27% of their missed shots. Michigan State doesn’t turn opponents over very often and tends to surrender a few too many free throws but every shot is going to be contested. It will be key for Michigan to not only hit some early threes but get to the free throw line and try to pick up some easy points at home.

Michigan needs a spark. The Wolverines appeared lifeless in Iowa City and are on the verge of a real tailspin, entering the toughest stretch of schedule all season, if they can’t figure out their offensive woes against Michigan State. The number one key for Michigan in this game is to control the tempo. That doesn’t mean that the Wolverines need to play 60 possession game to win, it means that they need to prevent Michigan State from getting easy opportunities in transition. The Wolverines have been very effective pushing the ball in spots themselves and a couple of early baskets in transition could be a much needed offensive confidence boost.

We’ve seen this Michigan offense clicking on all cylinders this season but we’ve also seen it struggle. Usually when Michigan is struggling it’s because the Wolverines miss open looks when opponents pack the lane and dare them to shoot the three. If Michigan hits a few of those threes early then it opens up the back cuts, the pick-and-roll, pick-and-pop and an array of other bells and whistles that the Wolverines want to run. To compound matters, look for Michigan State to use more of the hard hedge that has been so effective against Michigan’s pick-and-roll action. Burke needs to find ways to get Morgan the ball on the roll, or exploit Michigan State’s slower big men with his quickness.

It’s tough to do, but a strong defensive rebounding performance against Michigan State can be a debilitating blow to the Spartan offense. That was a key for Michigan in East Lansing last year but the Wolverines proved it wasn’t necessary to win by winning in Ann Arbor despite surrendering numerous second chances. Nix, Dawson, Payne and Green are all great offensive rebounders that have some sort of size, strength or athleticism advantage in their respective match-ups. Neutralizing these advantages would be a huge win for Michigan.


Pomeroy likes the Spartans, even on the road, by a final score of 68-64. He gives Michigan a 34% chance at the home upset while Vegas has Michigan State as a two point favorite. I don’t think the emotions of this rivalry can be overstated. Tim Hardaway Jr. emphasized how important it was to avoid becoming “emotionally drunk” while Evan Smotrycz could really use a couple of early baskets to boost his confidence. On Michigan State’s side, Draymond Green emphasizes that the rivalry is “personal” and he’s struggled against the Wolverines lately.