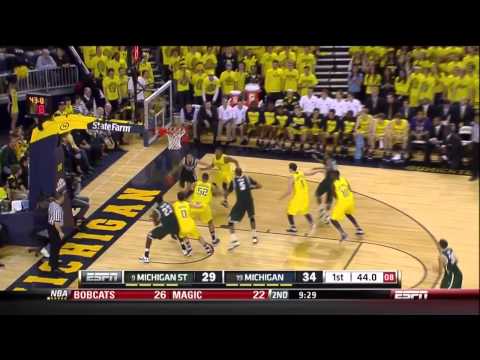 With 5:25 to go in the first half, Michigan held a 10-point lead and it seemed the Wolverines could do no wrong. But this was a rivalry game and there was no way that Michigan State was going to just lay down. Following Trey Burke’s bucket that gave Michigan its biggest lead of the half, the Spartans went on a 9-0 run of their own to cut the deficit to just one point with 1:34 on the clock. Michigan State seemed poised to carry all of the momentum into halftime and had erased Michigan’s strong early performance in the blink of an eye. But then Burke found an open Stu Douglass in the corner with just over a minute to go. Douglass buried the triple and was fouled by Brandan Kearney in the process, giving Douglass the rare opportunity at a four-point play. (Michigan’s second four point play in two years versus Michigan State.) Douglass converted the free throw to give the Wolverines a five-point lead. On the next Spartan possession, Tim Hardaway Jr. came away with a steal off an errant pass by Travis Trice and was fouled in transition on the other end. He hit the two freebies, and suddenly Michigan’s lead was back up to relatively comfortable seven points. That’s where it would stay heading into the break, as Draymond Green misfired on a wide open 3-point attempt in the closing seconds of the half. It took a couple of big time plays and also a sprinkling of luck but this was a much needed stretch of play to halt the Spartan run heading into the break.

2. Burke responds after the Spartans take the lead for the first time

Michigan held the lead for the first 33:15 of the game but then Brandan Kearney — who’s averaging just 1.5 points per game with two made 3-pointers on the season — hit his second 3-pointer of the game to give the Spartans their first lead with 6:45 to play. Keith Appling followed Kearney’s three with a bucket of his own, and Michigan State had a 3-point lead and momentum with under six minutes to play. Michigan badly needed a bucket to stop the 8-0 Spartan run and looked to its freshman. Off of a ball screen from Jordan Morgan, Burke pulled up from well beyond three point range to bury a three point shot in Kearney’s face. It’s doubtful that this was the shot John Beilein would have preferred, it was a deep, well contested, three point attempt early in the shot clock, but it went in. Burke was the star of the night and sometimes a team’s star player just has to make a big shot.

3. Clutch buckets by Hardaway keep the deficit within reach late

For a good part of the game, Tim Hardaway Jr. was a non-factor. He didn’t make a field goal in the first half and, other than a highlight-reel dunk to open the second half, he was relatively quiet for most of the second half. But when Michigan absolutely needed Hardaway, down by three points twice with under three minutes to play, he responded. Beilein drew up two consecutive sets designed to get Hardaway the ball. First, Hardaway came off of a Morgan screen and drilled a jump shot from the top of the key to cut the lead back to one. Long twos are generally the worst shots but Hardaway was unfazed. On the other end, the Spartans received a little bit of luck after Burke made a great play to block Trice’s shot, but the ball ended up in the hands of Austin Thornton, who was then promptly fouled by Hardaway. Thornton hit the two free throws to increase the Spartan lead to three again. Once again, Hardaway responded. This time off of a pass from Morgan on the left side of the key, Hardaway drove the baseline hard left and finished strong with a two-handed layup. Michigan had the defecit down to one point with 2:22 to play and empty trips on either of these late possessions could have doomed the Wolverines’ comeback hopes.

After a great defensive possession by Michigan forced Appling to throw up a well-contested three pointer, the Spartans had new life when Brandon Wood came away with the offensive rebound. With just over a minute to go, Michigan State had a full shot clock to work with, two timeouts and a one-point lead, and was fully intent on bleeding clock. Once again, the Michigan defense forced Appling to take a tough shot, this time on a floater in the lane. The shot came up short, and the rebound bounced out to Burke, who immediately took off in transition. With one defender on his back and Draymond Green guarding the bucket, Burke went right at Green and found a wide-open Stu Douglass under the bucket for an easy layup. Driving straight into two Michigan State defenders on a two-on-two break might not be the smartest play, but there was no doubt in Burke’s mind that he was going to make a play. The drop-off pass capped off a nearly perfect performance from Burke and gave Michigan the lead headed into one final possession.

This was Michigan’s third Big Ten win that boiled down to a final defensive stand. Following a Tom Izzo timeout, the Spartans had 29 seconds to score with just a one second differential between the shot and game clocks. This was the game.

It was clear Izzo wanted to get the ball to Draymond Green in the post. Thornton had a wide-open look at a three with 19 seconds to go but instead of pulling the trigger, he forced it inside to Green, who was promptly double-teamed by Hardaway and Novak. Green had nowhere to go and was forced to kick it back out to Wood, who promptly passed the ball back in the post, this time to Derrick Nix. But Nix was also double-teamed and kicked it right back out to Appling. This is where the possession begins to feel chaotic. Feeling the seconds on the clock begin to tick down, Appling drove and was stuffed by Morgan’s help defense. The ball bounced back into Wood’s haands and he drove and kicked the ball to Green with five seconds to play. Novak’s defense was tight as he tried to deny a three point attempt and Green was forced to drive. He drove hard to his left and pulled up just outside the free throw line, elevating and hanging in the air for what felt like an eternity before letting the shot fly. The ball clanked off the backboard and then the rim, and Green’s final attempt at a tip-in fell short. As the buzzer sounded, Crisler erupted and the Wolverines came away with their third straight win over the Spartans.

Michigan came away with baskets on three of its final four trips while holding Michigan State empty on its final three possessions.