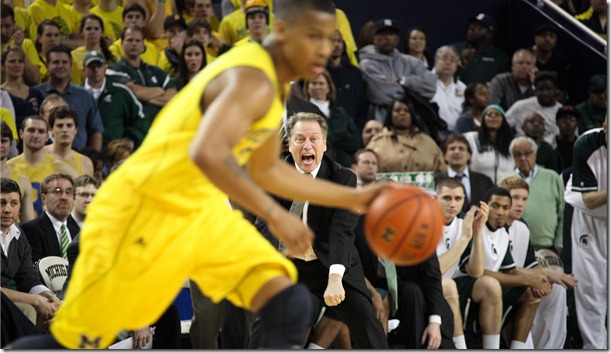 A year ago, Michigan hit Michigan State while the Spartans were down. The sweep provided the Michigan program with a jolt of energy, confidence and an eventual NCAA Tournament berth but there was no denying the existing chinks in the Spartan armor. This year, for the first time in over a decade, the two programs finally had a chance to spar on equal footing. Both teams entered Tuesday’s game ranked in the top-25 for the first time since 1998 and were separated by just a half game at the top of the Big Ten standings. The game on the floor did not fall short of expectations. The Wolverines let a double-digit second half lead slip away to a valiant Michigan State run before battling back, and then holding on in the closing moments, to escape with a narrow 60-59 victory.

The first half of this game went according to Michigan’s game plan. The Wolverine offense hummed along effectively as Michigan hit threes, got easy looks off of the pick-and-roll and even found some timely production off the bench. Defensively Michigan held its own on the defensive glass, rebounding 75% of Michigan State’s misses, and seemed to control the game while weathering a pair of Spartan runs.

If the first half went Michigan’s way, the second half was all Michigan State. The Spartans outscored the Wolverines by .22 points per trip, wiping away a double-digit Michigan lead, and controlled the game on both ends. It was vintage Michigan State basketball. The Spartans grabbed 56% of their second half misses for seven second chance points and hit four timely 3-point shots on just six attempts. As the Michigan State offense found its groove, Michigan’s offense sputtered. The Wolverines fell in love with the three point shot, making just 2-of-11 second half 3-point attempts, and scored just two points over a six minute stretch midway through the second half.

The game would be decided by a couple of late possessions but full game statistics still paint a clear picture. Michigan’s strong shooting numbers were buoyed by a great performance inside the arc – 17-of-24, 70.8% on twos – compared to just 6-of-21 on three point attempts. What’s most impressive about Michigan’s two point shooting numbers is that just four of the 27 two point makes were assisted. This wasn’t an array of backdoor cuts shredding the Spartan defense but Michigan players putting the ball on the floor and making things happen. Burke (8-8 2p), Novak (2-3 2p), Hardaway (3-5 2p), Smotrycz (2-4 2p) and Vogrich (1-1 2p) all had a number of strong individual takes to the bucket. With Burke and Hardaway that’s to be expected, but seeing that sort of effort across the board against a defense like Michigan State is impressive.

Michigan State shot the ball extremely well from three point range (7-of-15) and did wear down Michigan on the offensive glass, rebounding 36% of its misses. However, the Spartans turned the ball over on just shy of a quarter of their possessions and were never able to get to the free throw line. The turnovers – nine combined from Green and Appling – really seemed to be the factor that kept Michigan alive. Michigan State made mistakes, like Appling dribbling the ball off of his foot, but Michigan also forced the Spartans into some uncomfortable situations and had eight steals.

On Monday, reporters asked Zack Novak whether he thought Trey Burke understood this rivalry, given that he’s just a freshman from the state of Ohio. Novak laughed the questions off and assured reporters that there was no need to worry. By the end of the night on Tuesday, Burke had etched his name into the rivalry’s record books. Michigan’s floor general was the best player on the floor and changed the game on both ends. From his timely steals and blocks to his equalizing NBA range three point shot and of course his final assist, Burke won this game for the Wolverines.

From a Michigan perspective, there probably isn’t a more satisfying way to close out a game against Michigan State. It has to be more than a bit rewarding to Michigan’s seniors that were integral parts of the one-point loss two seasons ago. Forget the chaotic defensive possession, which was clearly disrupted by Michigan’s quick double-team of Draymond Green, and final moments. Michigan’s win was about toughness. This was billed in the media as a game of power versus finesse but as John Beilein astutely pointed out in his post game, the Wolverines have plenty of toughness despite not resembling football players. Michigan shouldered Michigan State’s blow, falling behind by four points in the closing minutes, and answered with winning plays down the stretch. Tim Hardaway Jr. hit big shots while Trey Burke miraculously, he even called the play “a bit lucky”, found Stu Douglass for a layup after driving into two Spartan defenders and Michigan held the Spartans scoreless on their final three possessions.

A couple of notes on random coaching decisions. Small ball worked for Michigan against Michigan State last year so it wasn’t all that surprising to see John Beilein go with that option again. The fact that Zack Novak has been relatively effective defending Draymond Green gives Beilein this luxury and it helps the Michigan offense significantly. I thought Michigan’s approach for defending the pick-and-roll was more effective, especially early, as Michigan State seemed hesitant to hedge as hard as Iowa and Northwestern while Morgan was disruptive defensively.