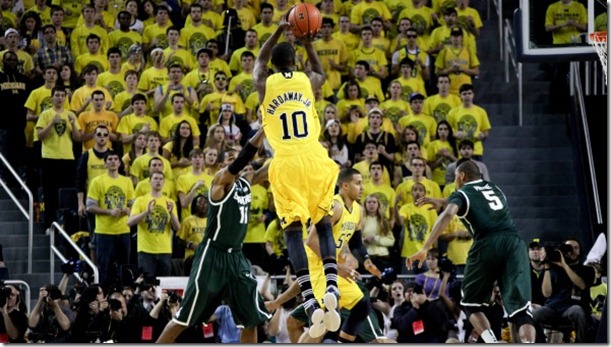 In Big Ten play, Michigan has attempted 44.1% of its field goals from three point range. That’s a higher proportion of three point attempts than any other Big Ten school despite connecting on just 29.5% of those long range attempts, third worst in the conference. John Beilein has repeatedly mentioned that the Wolverines just finished playing five games in 13 days, a stretch that he says is comparable to a typical NBA schedule, and that more regular rest could help his slumping shooters.

A closer look at the individual numbers show that there are plenty of struggles to go around. Tim Hardaway Jr.’s slump is the most pronounced, 8-of-42, but Stu Douglass is the only person that’s really shooting the ball well with significant attempts. Burke, Novak, and Smotrycz are all well below their season averages through seven league games:

The three point shot is a staple of Michigan’s offense and it’s unlikely that it will change anytime soon. However, Michigan’s struggles to defend the three point shot might be an even greater red flag. Through seven Big Ten games, Michigan has the conference’s worst three point defense and is allowing opponents to make 41.9% on three point attempts. Michigan has faced an array of different three point shooting abilities, its seven conference opponents rank 1st, 2nd, 3rd, 7th, 8th, 10th and 11th in terms of Big Ten perimeter shooting percentages. Five of those opponents have shot over 40% from three point range and just one, Penn State, has been held under 35% on three point attempts. There are a couple things to digest when trying to get a handle on the Wolverines struggles defending the three.

Michigan State was 7-of-15 on three point attempts at Crisler Arena on Tuesday night and a couple themes emerge when watching all seven makes. Here’s the back-to-back footage of every make:

Two of the makes were against zone – 1-3-1 (#1) in one instance and some sort of 2-3 match-up in another (#3) – but the other makes all stem from Michigan’s collapsing defense either off of penetration (#4) in transition (#2, #5, #6) or from the post (#7). In all of the clips, Michigan’s defense is much more worried about providing help defense than the three point shot. The Wolverines actually have five players in or on the edge of the paint when the ball is kicked out in most clips.

Because of its personnel, Michigan needs to overplay the interior. The Wolverines rank second to last in the Big Ten in Ken Pomeroy’s effective height metric and last in percentage of shots blocked. Despite those limitations, Michigan’s defense is still fourth best in the league at defending the two point shot, 45.8% allowed, and is the best defense at keeping opponents off of the free throw line. Michigan is taking away clean looks from in close and forcing turnovers by playing aggressive defense around the hoop.

Jordan Morgan isn’t going to block Adreian Payne or Meyers Leonard’s shots when they get the ball on the low block in one-on-one situations. He’s not that sort of athlete and he’s giving up three or four inches in height. Instead, Michigan is forced to throw an array of double team looks from different directions to try and force opposing big men into uncomfortable situations. The numbers say that this has worked pretty well, but when opposing offenses find their shots, they have been effective.

Double teams weren’t the only culprit versus Michigan State. Most of the Spartans best looks were because of Michigan’s dramatic over helping to penetration. The strategic thinking here is relatively strong. Would you rather let Keith Appling get easy looks or make Austin Thornton and Brandan Kearney beat you with threes? Michigan State made 48.5% of its twos, under its season average, and I would venture a guess that a number of those were off of put-backs.

The numbers say that Michigan should shoot fewer threes and its opponents should attempt significantly more long range efforts. Obviously there’s some regression toward the mean involved – Michigan’s three numbers are lower because they attempt more, etc. – but the Wolverines need to improve their three point statistics on both sides of the ball to sustain success.