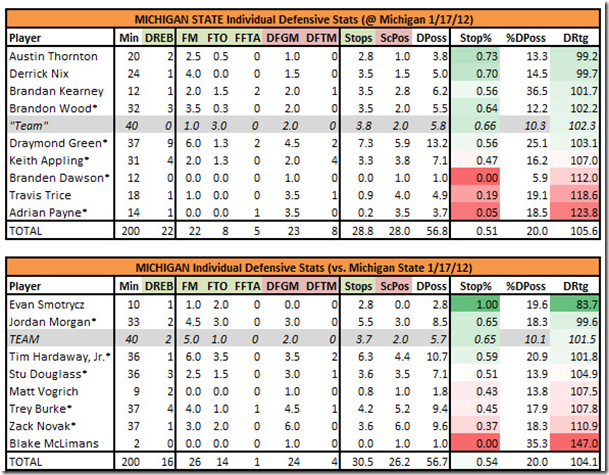 Much has been made of Michigan’s upcoming schedule and rightfully so. Fresh off of playing five games in 13 days, Michigan will enter what could be an even more difficult five game stretch.  The Wolverines have yet to win a true road game this season but will play five of their next six games on the road including games at Ohio State and Michigan State, two programs that haven’t been beaten at home this season.

The upcoming six games are (Pomeroy rankings in parentheses): at Arkansas (89), at Purdue (30), at Ohio State (1), Indiana (12), at Michigan State (6). This stretch might not make or break Michigan but it will certainly test this team’s intestinal fortitude. If the Wolverines can steal a couple of road games early, they remain in the Big Ten title hunt. If they fall into a losing streak, the subject of conversation moves toward potential NCAA tournament selection.

More on scheduling, three point shooting and a new approach toward analyzing defense after the jump.

Even beyond the immediate stretch, Michigan’s schedule is going to be difficult from here on out. Here’s a look at some key facts about Michigan’s final 12 games:

Playing to the Competition

I had planned a full post on this but the numbers are slowly becoming dated. While examining Wisconsin’s over-ranking phenomenon, Dan Hanner stumbled upon some great insight surrounding the 2011-12 Wolverines. Hanner’s study focuses on the differences in teams performances against good and bad, top-100 and not, teams. Hanner’s observation on Michigan is pretty simple, the Wolverines elevate their level of play significantly against top-100 teams. The difference between Michigan’s pythag rating against teams rated outside of the top 100 (.7370) and teams in the top 100 (.9355) is significant, the second largest difference among the 10 teams that Hanner singles out for elevating their play. In Hanner’s ranking of teams solely based on their performance against top-100 teams, Michigan moves up to 14th nationally which is substantially better than Michgian’s 27th slot in KenPom’s ratings at the time. Here’s Hanner’s conclusion on the Wolverines:

Michigan doesn’t have the type of athletes that can just pummel a team from the Patriot League. But their offensive system is so difficult to defend, that elite teams usually cannot stop them from scoring.

This fits Michigan’s identity. Michigan doesn’t have the athletes, the depth or talent to run many teams out of the gym. What the Wolverines do have is the discpline, experience and system to compete in just about any game they play. These numbers were published before the Iowa game but the point still seems to hold. Would anyone question the fact that Michigan looked better against top-100 Michigan State than sub-100 Iowa?

Today is all about the threes. I wrote a piece earlier regarding Michigan’s three point issues John Gasaway published two pieces today as well.

The first, at ESPN Insisder, focuses on Michigan’s dependency on the three point shot. Gasaway notes that Michigan hasn’t made threes but could be lethally efficient if they start falling:

With the Wolverines we encounter our first example of a team about which one can truly say, “If they ever start hitting all these 3s, look out.”

He goes on to note the Wolverines success inside the arc and Trey Burke’s great performance as a freshman point guard but the fact that Michigan’s offense has been relatively productive despite missing so many threes is impressive. Michigan’s in-conference offense ranks fifth, and is above the league average, even though it has struggled with the skill that it’s designed around. If Hardaway starts heating up from three point range (he’s accounted for 30% of Michigan’s three point misses in Big Ten games), this offense could go from above-average to exceptional overnight.

Over at Basketball Prospectus, Gasaway puts together a graph of the prevalence of the three point shot since its inception:

The defensive box score movement picked up some traction when Andy Glockner wrote an article in Sports Illustrated during the off season. The concept is to chart defensive possessions throughout a game and come away with an improved way to analyze defensive performances on a game-to-game basis. It’s something that we’d love to do for every game here but don’t have the time and resources. However, Deuce 2 Sports has been putting together defensive box scores for Michigan State games which means we have a pocket of data to analyze from Tuesday’s game.

I tend to trust these numbers because the numbers back-up a lot of what I saw when I re-watched the Michigan State game. Adreian Payne and Travis Trice were brutal defensively for Tom Izzo and they rate out as the worst defensive players on the floor (ignoring McLimans’ two minutes). So what does this mean for Michigan? Some quick observations which will hopefully lead to some discussion:

What are your thoughts on the numbers? Is there anything that stands out as particularly surprising?