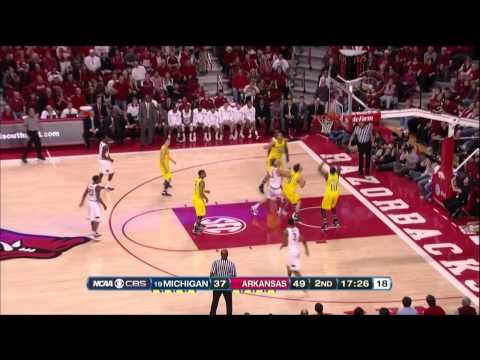 Michigan surrendered 46 points and was trailing by 13 points at the half. We’re not going to show video of Arkansas making its first 11 shots of the game for two reasons. First, we aren’t sadistic. Second, the CBS broadcast missed a significant portion of the first half. Something had to change, and fast, if Michigan was going to have a chance to come back in this game. The Wolverine run started with Jordan Morgan. After Arkansas opened the half with a 3-pointer to increase the lead to 16, Morgan went on personal 8-0 run to shift the momentum in Michigan’s favor. Of his four buckets, three were dunks that brought the Michigan bench to its feet. All four baskets were off great looks from his teammates, two assists from Douglass, one from Hardaway and one from Burke. The final two baskets do a great job of illustrating what makes Morgan successful when he’s playing well. On Hardaway’s assist, you can see Morgan simply outrunning the entire Razorback squad down the floor. On the final play he gets one of his three offensive rebounds on the day and makes himself available for Burke’s drop off pass. Suddenly, it was a ball game.

From a span of 11:12 to 6:50 in the second half, the Michigan defense held the Arkansas offense scoreless. It was exactly what the Wolverines needed in order to close the gap on the deficit — make stops and create scoring opportunities on the other end. The only problem was, the Wolverines were also held scoreless during this four and a half minute stretch and the deficit stayed at 11 throughout. Smotrycz, Vogrich and Novak all missed badly on open 3-point attempts to start the stretch. Then Burke barely hit the rim on a contested layup in transition, Hardaway and Morgan both committed turnovers, and Morgan finished the stretch off with a brick off the backboard that never even hit the rim. When you’re down by double digits in the second half, the recipe for success is simple: live possession to possession, get stops, and convert on the offensive end. In this critical stretch, Michigan executed half the equation perfectly, but the Wolverines inability to score increased the pressure during the closing minutes.

Just when everyone was ready to count the Wolverines for dead, the offense came alive one final time. Following the scoreless stretch, the Wolverines went on a 12-1 run, cutting the deficit from 13 to just two in a span of under three minutes. Morgan started the scoring barrage with a lay in off the glass off a beautiful bounce pass from a driving Douglass. Hardaway followed with a jumper and a defensive rebound to start a fast break heading the other way. Hardaway passed the ball up to Burke, who found Morgan streaking down the right side of the lane for yet another fast break dunk. Burke then got into the scoring action, draining a three from well beyond NBA range. And to cap the run off, Burke added another assist, this time to a wide-open Novak, who hit a three in the corner. With 3:48 to go, Michigan was down by just two, 62-60. In the previous key play sequence, Michigan got it done on the defensive end but couldn’t capitalize offensively. This sequence was the scoring run Michigan needed but the only question was whether it was too late.

This was a familiar situation for Michigan. Earlier in the week the Wolverines trailed Michigan State by a point with under a minute to play and buckled down for a stop. Now, trailing by two with 43 seconds on the clock, Michigan needed another late defensive stop. Arkansas bled the shot clock before going into its pick-and-roll offense. BJ Young doesn’t use Hunter Mickelson’s screen until there’s roughly four seconds on the shot clock but he manages to find Mickelson on the slip to the basket. Morgan shows for too long on the screen-and-roll and Young’s pass is a relatively easy one. The finish is even easier as Novak and Douglass are both seven or eight inches shorter than Mickelson and too late to provide any substantial help around the basket. Michigan’s deficit was now four points with 41 seconds to play as its comeback chances dwindled.

5. Trey Burke’s last-second 3-pointer rattles in and out

Michigan countered Mickelson’s bucket with a quick layup from Trey Burke and was then forced to foul. BJ Young missed the front end of Arkansas’ first free throw effort but the Razorbacks came up with the offensive rebound. The offensive rebound felt like the dagger, again, but Julysses Nobles missed another front end and Tim Hardaway Jr. secured the rebound. Michigan would have the ball on the final possession with a chance to tie or win. The Razorbacks used their final foul to give with 7.6 seconds to play and John Beilein called a time out to draw something up. With Douglass inbounding the ball, the primary option was inbounding the ball to Hardaway, who was cutting down the sideline toward the basket. With that option denied, Michigan threw the ball into the backcourt to Burke, who executed a screen-and-roll with Evan Smotrycz. Things went downhill quickly. Smotrycz’s screen wasn’t great and Burke bobbled his dribble while trying to reject the screen. Suddenly with the clock ticking down, the only option was for Burke to create something. He did just that, going to his left and creating space with the step back before getting off a clean look. The shot looked good, going halfway down the basket before rattling out. The photos don’t lie: