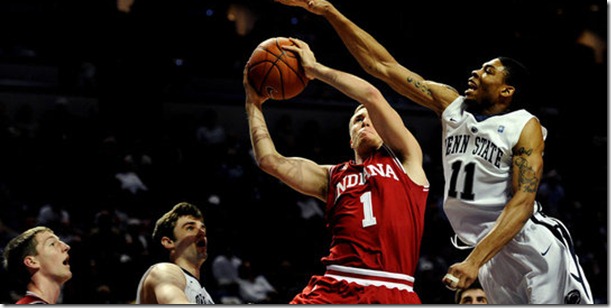 Ohio State may be tied in the standings with Michigan State and Michigan but the Buckeyes are beginning to establish themselves as the class of the league. Ohio State is dominating opponents, outscoring them by .28 points per trip, but there is a red flag. Those numbers are boosted by three Buckeye wins over Nebraska and Iowa by an average of 32 points and the league’s second easiest schedule to date. Ohio State still has two games to play against Michigan State, Michigan and Wisconsin.

The Spartans have a strong defense but Tom Izzo’s squad is rolling on the offensive end of the floor. Michigan State boasts the most efficient offense in conference play thanks to the best shooting overall, 56.7% eFG%, and from three point range, 44.8%. Combine that with the league’s best offensive rebounding and you have an offensive power house. What a difference a year makes as the Spartans were the worst offense and second worst shooting team in the league just last season.

Two weeks ago, Wisconsin was 1-3 and many were writing off the Badgers, questioning whether they had the mettle to make the NCAA Tournament. Since losing to Michigan, the Badgers have reeled off four straight wins including rare road wins at Purdue and Illinois. Indiana’s defense stood out as a sore thumb despite the Hoosiers’ 3-1 conference start and they have still held just two Big Ten opponents, Ohio State to .99 points per trip and Penn State to .98 points per trip, to less than one point per possession in conference play.

Michigan’s efficiency numbers seem to mirror common perception. The Wolverines are better than the league average of 1.02 PPP on both ends but never dominant like Ohio State and Michigan State. Things are only going to get more difficult for the Wolverines as they play seven of their final 11 Big Ten games on the road.  –Dylan Burkhardt

The more that we do this feature, the more difficult it becomes to call any result a “surprise” in the Big Ten, especially when the triumphant underdog is playing at home. Coming into this game, Nebraska had just one Big Ten win—a 70-58 home victory against Penn State. Indiana, once ranked as high as seventh nationally, was coming off two straight losses and was in desperate need of a victory. A game at Nebraska appeared to be the sort of bounce-back, confidence building road win that the Hoosiers needed. The first 30 minutes were smooth sailing for Indiana, who led by as many as 13 points, before the Cornhuskers rattled off a dramatic comeback. Trailing by 11 points with 6:38 to play, Nebraska closed the game on an 18-6 run and held onto the upset as Jordan Hulls’ desperation heave at the buzzer clanged off the back iron. – Kevin Raftery

Apparently the Cornhuskers left all of their scoring ability at home after Wednesday’s win over Indiana. In that game, four Nebraska players scored in double digits en route to the Cornhuskers’ biggest win of the season. But just three days later, not a single player on the Nebraska roster managed to top eight points. The Buckeyes routed the Cornhuskers for the second time this season, winning by a final score of 79-45. Ohio State has the best defense in the Big Ten, and swept the Cornhuskers by a dramatic combined score of 65 points. It’s not often that you’ll beat Ohio State in Columbus, or beat anyone else, when nobody on your roster reaches double digit scoring.- Kevin Raftery

Not much needs to be said here. For the first time since 1998, both teams came into this matchup ranked in the top 25. And they didn’t disappoint. In classic rivalry fashion, the game went down to the last shot. It was Draymond Green who had the chance to be the hero as the buzzer sounded, but his jumper from the free throw line clanged off the backboard, then off the rim, and his final tip in attempt fell short. The rematch is now only two weeks away, slated for Feb. 5 in East Lansing and Green has already guaranteed victory in what could be his final game against Michigan. – Kevin Raftery

Disappointment of the week: Purdue’s Disaster Weekend in East Lansing

Purdue drops an egg in East Lansing against Michigan State in an 83-58 drumming. Everything seemed to go wrong for Purdue, who didn’t arrive in East Lansing til roughly two hours before game time after flight problems forced the Boilermakers to travel to their noon game in a bus leaving at 5 a.m. Robbie Hummel had possibly the worst game of his career, going 0-for-11 from the field for just two points while Draymond Green had 8 points, 12 rebounds, 7 assists, 2 steals and 1 block to lead the Spartans. In a game where the winner earned a share of first place in the conference, the Boilermakers barely even put up a fight. The disappointment didn’t stop on the court. Matt Painter and Spartan freshmen Branden Dawson got into a verbal altercation that ended with Painter telling Dawson, who committed to Michigan State over Purdue, that he “didn’t need his ****” after Dawson yelled toward the Purdue bench. Painter also got into a riff with members of the Izzone after they reportedly yelled disparaging remarks about Hummel’s knee:

“I was just trying to fight, man, you know,” Painter said. “I think they’re great, I think the Izzone’s great, but if they’re gonna say, ‘I hope you tear your ACL again,’ I’m gonna say something. He doesn’t deserve that.

All in all, a rough day in East Lansing for the Boilermakers. – Kevin Raftery

Marshall may have only scored seven points in Penn State’s 54-52 upset victory over No. 25 Illinois on Thursday, but his block at the end of the game sealed the victory for the Nittany Lions. With time expiring, Illinois’ Sam Maniscalco had a clear lane to the bucket for an easy layup that would have tied the game, but Marshall flew in out of nowhere and stuffed Mansicalco, ensuring the Penn State victory. Marshall, a 6-foot-4 guard, had three blocks on the night. – Kevin Raftery

Similar to last week’s rivalry game featuring Michigan, this game will match-up a pair of opponents at the top of the Big Ten standings. Michigan and Ohio State sit tied with Michigan State at the top of the conference at 5-2 in Big Ten play. Ohio State plays Penn State at home on Wednesday and Michigan will travel to Purdue on Tuesday but, regardless of those outcomes, this one will have serious implications in terms of conference standings. Furthermore, Michigan hasn’t won in Columbus since a 61-50 win in 2003, when Daniel Horton led the squad with 17 points and five assists, as part of a 13-game Michigan winning streak. – Kevin Raftery