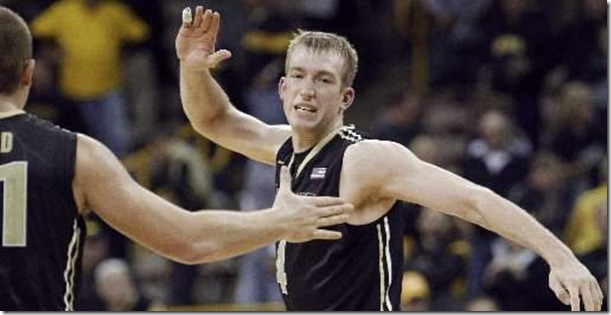 Michigan heads to Purdue for its second of three consecutive road games in search of its first road win of the season and first in West Lafayette since 2003. Michigan’s recent games against Purdue seem to have been defined more by who hasn’t played – Manny Harris missed a game and a half, Zack Novak missed a game and Darius Morris came off the bench due to suspension as Purdue opened the game on a 19-3 run – than anything else over the last four seasons. This year, Michigan should have a full roster and Purdue appears to have taken a step back from last season. The Boilermakers have already matched last season’s regular season loss total of six and snapped a 26-game home winning streak with a loss to Wisconsin two weeks ago.

First things first, this is not your vintage Matt Painter Purdue defense. The Big Ten Geeks point out that Purdue is allowing 1.07 points per possession in conference games, a mark it surrendered just seven times in 18 Big Ten games last season. Purdue’s defense ranks seventh in the Big Ten, a stark contrast from the previous four seasons which saw the Boilermakers in one of the league’s top three slots. Purdue’s struggles on the defensive end stem from overzealous fouling, the Boilers are allowing a free throw rate (FTA/FGA) of 40.5% (10th B10), and failing to defend three point shots, Big Ten opponents have made 40.7% (11th B10) of their triples versus Purdue. Purdue is relatively pedestrian on the defensive glass, rebounding 69.8% of Big Ten opponents’ misses, and doesn’t force as many turnovers as you’d expect with an 18.9% forced turnover rate in Big ten games.

Purdue isn’t just pretty good at valuing the basketball, the Boilermakers turn the ball over less than any other Division I team. The Boilermakers 14.8% turnover rate hasn’t suffered in Big Ten play, instead improving slightly to 14.7%. Maximizing possessions is nice but the rest of the Purdue offense is fairly average. Purdue’s effective field goal percentage in Big Ten games is 48.1%, 46.3% on twos and 34.3% on threes, and ranks 8th in the league. The Boilermakers have rebounded just 29.9% of their misses in Big Ten play but have shown signs of improvement, grabbing 40% of their misses in each of their last two games (Iowa and at Michigan State). Purdue is the third best Big Ten team at getting to the free throw line, 38.6% FTA/FGA, but second worst at converting its freebies, making just 64.2% of its free throws.

Despite two ACL surgeries, Robbie Hummel is still playing, and leading Purdue. Hummel is averaging 15 points and six rebounds per game on the season but has run into a slump since entering conference play. After a 0-for-11 day at Michigan State, Hummel has made just 19-of-50 (38%) two point attempts and 8-of-34 (23.5%) three point attempts in Big Ten games.

Point guard Lewis Jackson (10.0 ppg) and three point specialist Ryne Smith (9.9 ppg) are the other two (near) double digit scorers in the Purdue lineup. Jackson isn’t a three point threat (5-of-22) but the 5-foot-9 guard plays strong and knows how to get to the free throw line, with more made free throws (63) than two point baskets (61) on the season. Smith is just the opposite, having attempted 122 threes, making 43%, compared to just 18 two point attempts on the season. Knowing the scouting report is critical defending Jackson and Smith – keep Jackson out of the lane and force Smith to put the ball on the floor without open three point looks. Jackson’s physical and quick style of play should provide a unique and challenging test for Trey Burke on both ends of the floor.

Kelsey Barlow and Terone Johnson are the two primary attacking guards in the Purdue rotation but they aren’t great three point threats. Johnson is shooting just 34% (18-of-53) at the free throw line but both players are among the best in the league at picking up steals. Barlow is likely to be tasked with defending Hardaway and will play physical defense to try to take Michigan’s leading scorer out of his comfort zone.

Three different players have started at the five position for Purdue this season, 6-foot-9 sophomore Travis Carroll, 6-foot-8 freshman Jacob Lawson and 6-foot-9 sophomore Sandi Marcius. None of the three underclassmen big men are particularly overwhelming in any particular area but Carroll appears to have emerged as the starter of late. Lawson is probably the strongest defender of the group but remains foul prone while Marcius generally plays against bigger and slower front lines than Michigan. Purdue also has the ability to put Robbie Hummel at the five position against Michigan’s smaller lineup, with Novak and Smotrycz at the four and five.

It will take a complete game effort, something Michigan hasn’t mustered this season, but the Wolverines are capable of stealing this game. The key statistical match-ups are battles of extremes. Michigan is struggling to shoot the three in Big Ten games but Purdue is terrible at defending long range efforts. Purdue is as good as anyone in the country at not turning the ball over but Michigan has caused more turnovers than all but one Big Ten team. Purdue’s defense sends opponents to the free throw line often but Michigan attempts fewer free throws than any other Big Ten team.

Three point shooting could very well be the deciding factor. The Wolverines have made less than 30% of their threes in each of the last five games and this would be the perfect time to snap out of that funk.

Ken Pomeroy likes Purdue at home, predicting a 67-63 final score with a 35% chance at a Michigan upset. Vegas follows a similar line of thinking with Michigan as a five point road underdog.  Things aren’t going to get any easier for Michigan as the Wolverines continue to search for that first road victory.

Jon Horford will travel to Purdue and “may” play tonight after missing the last 11 games due to a foot injury. Update: Maybe not.

Despite growing up just a couple of hours from West Lafayette, Zack Novak has only played one career game at Mackey Arena, a 16 point, 6-of-11 (4-7 3pt) and five rebound performance.

The Purdue student section, The Paint Crew, has been camping out in line for tonight’s game since noon on Monday.

John Beilein showed the team film of Eli Manning and is using Manning as an example of resilience and toughness with his team.