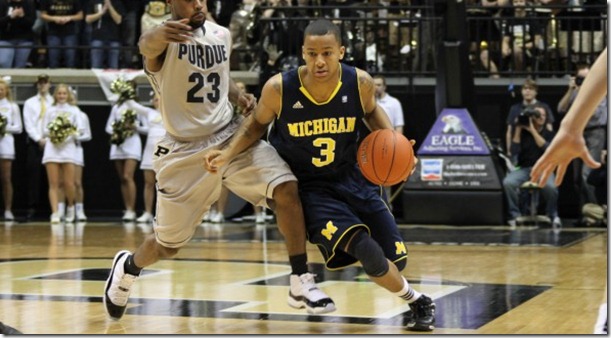 Michigan point guard Trey Burke met with the media today over teleconference to discuss Michigan’s upcoming game against Ohio State in his hometown of Columbus as well as his relationship with Ohio State big man Jared Sullinger. Listen to the audio in the embedded audio player or read through Burke’s full comments below.

How many ticket requests have you been getting from family and friends?
“A lot of people have been asking me for tickets. I try my hardest just to get my closest family members tickets and some of my trainers that have worked me out over the summer. There are a lot of people blowing my phone up right now. They want to see me play back home in Columbus. I’m just trying to get the people closest to me tickets.”

How do you approach this game? Like any other game or something your looking forward to…
“It’s a game that I’m definitely looking forward to. We’re tied for first at the top of the conference with Ohio State so it would definitely be a big win. Just to have the opportunity to go back home and play in Columbus and play in front of a lot of my supporters. It’s big. I’m just going to go into the game with the same mindset that I’ve had all year: just trying to make plays an do what’s best for us to win.”

On communicating with Jared [Sullinger] and J.D [Witherspoon]…
“I have communicated briefly with Jared, and with J.D. over Facebook, over the last couple of weeks through text. It was a brief conversation and, honestly, we didn’t talk about the game that much. One thing he did say was that our parents were probably going to cry seeing us on the court playing against each other for the first time. Like I said it’s a big game and it’s going to be fun playing against him.”

Describe your friendship with Jared…
“It really got started my fourth grade year. My dad told me that we were going to get a kid named Jared. He told me it was JJ Sullinger’s brother and once I saw him… He was kind of short, like fat kind of, but he could play. He had good footwork and things like that and no one could stop him down low even though he was out of shape. From there on, all the way up to our senior year of high school we’ve played together. Playing on the same AAU team even though he was a year older than me. We were still always at the same tournaments and things like that. He would always be at my house and sometimes he’d stay for five or six days straight. We were more like brothers when we were younger. We don’t talk as much now because he’s in Columbus and I’m in Ann Arbor but we still have a great relationship.”

How did you not end up at Ohio State?
“My sophomore year I had committed to Penn State, kind of early. I did want to go to Ohio State, it was my hometown school and things like that. Once Jared committed there and they recruited JD, I started to like them more and more. They weren’t really recruiting me like that. I’d go to football games and they’d send me mail and things like that. But he never forced the issue to recruit me or offer me a scholarship. He kind of knew what he wanted at the point guard position and Craft had already committed there and he was going to a couple of Shannon Scott’s games. He was just recruiting other players. I kind of knew that the coaching staff wasn’t as interested in me as I wanted them to be. Once I got to Michigan, I saw that was the best decision for me and I took it. It is what it is.”

On driving against Jared early to get it out of the way…
“That’s kind of like all of my game. After the first TV timeout I’m relaxed. When I first come out there my adrenaline is pumping so much. After the first three or four minutes I’m sure it’ll be normal.”

On big game atmosphere…
“This is one of the big games. Coming into Michigan I knew we were going to play a top notch schedule. Face Ohio State twice, Michigan State twice. That was definitely one of the reasons I came here.”

On adjusting to lower scoring games..
“Last night my shot wasn’t falling as much so I tried to do other things to help the team win whether it was rebounding or assisting. I know that every night is not going to be the best shooting night. I just try to do all the little things to help my team win. It’s a lot about what the other team takes away. ”

On controlling emotions…
“It’s going to be really important for me to control my emotions out there. I can’t get caught up in one-on-one match-ups and I just need to make plays for the team. I’m the point guard out there, the quarterback, I call the plays and need to keep the team poised. Every away game we’ve been to this year the team has went on a 6, 7-0 run and there’s a couple times we let the crowd get the best of us but we’ve been working on that.”

On playing with Jared making each other better…
“Just playing with each other so much since we were younger. Him playing with me, he learned how to pass it out of the post when he was double teamed. He definitely developed some good traits in his game playing with me. I developed a lot of good things in my game too. Feeding the post or moving when the big man has the ball.”

On when he knew Jared would be a star at a high level…
“I had moved to Atlanta for a year in eighth grade and when I moved back my ninth grade year and Jared had grown 3 or 4 inches. He was about 6-foot-6, 6-foot-7 at the time and I knew that if he kept growing he would be a really good player. At a young age he had some of the best footwork I had even seen. Once I came back and saw that he was dunking, I was like ‘wow’ he’s going to be really good ”

When did you know you could be a high level player in college ball..
“At the beginning of this year. In high school, I knew that I was good in high school. I had to gain confidence to actually feel like I could succeed at this level. The more I was out there on the court this year, the more I got comfortable playing with my teammates, the more I gained confidence with myself.”