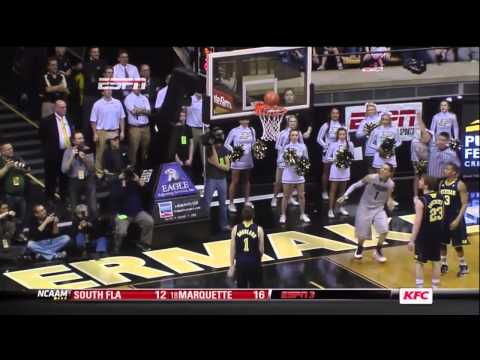 1. Purdue’s 17-3 second half run gives the Boilermakers their first lead of the game

Michigan was up 10 points with 13:41 to play and seemed to be in control of this game. Eventually, Purdue made its inevitable run. Purdue rattled off a 17-3 run and these final four Boilermaker possessions capped the run and gave Purdue a four point lead. Smotrycz got caught up in a screen, giving D.J. Byrd — a 40 % 3-point shooter — space to fire a three. Byrd nailed it, cutting the formerly 10-point deficit to just one. On the next possession, Anthony Johnson got to the basket and came away with three points the old fashioned way. Smotrycz was again the culprit, this time committing a silly foul under the basket after Johnson clearly already had him beat. The play gave Purdue its first lead of the game with 9:11 to go and, after Michigan’s third straight empty possession, Robbie Hummel increased the lead to four with a jumper of his own. Hummel’s bucket planted the Wovlerines’ backs firmly against the wall and left them searching for answers on both ends.

2. Morgan returns to the game, Michigan regains the lead

Throughout Purdue’s 17-3 run, Jordan Morgan sat on the bench. Afterward John Beilein mentioned that he went with Evan Smotrycz at the five position to cope with Purdue’s small lineup that featured Robbie Hummel at the five position.  But following Hummel’s jumper, Morgan had seen enough and pleaded the coaches to put him back in the game.  The coaches listened as Morgan, and Purdue’s Travis Carroll checked back into the game. Morgan made his presence felt immediately. With just over seven minutes to play, Morgan set a screen for Zack Novak and rolled to the bucket. Carroll hedged hard on the screen and Novak made the quick pass to Burke on the other wing, who found Morgan wide open down low. This extra pass to the other wing is a great option for beating Purdue’s hedge because Burke has a great angle to make the pass to Morgan rolling to the basket. Three Boilermaker defenders chase the ball and forget about Morgan who gets the easy layup.

On Michigan’s next offensive possession, Michigan goes back to the high ball screen. This time, Burke dished the ball off to Morgan, who was instantly surrounded by three Purdue defenders. Morgan stayed composed, came down on two feet and quickly found Douglass open in the corner. Douglass drilled the deep corner three to sway the lead back in the Wolverines’ favor, 52-51, with 6:25 to go. That’s the same shot that Douglass missed badly several times in Fayetteville and these are two great examples of Michigan executing the screen-and-roll to perfection.

With the way in which the Purdue offense was clicking late in the second half — the Boilermakers made 58% of their twos and 45% of their threes in the frame and at one point made nine straight field goals — Michigan was going to have to respond offensively. With 5:37 to go, Lewis Jackson made a layup to increase Purdue’s lead to four. The Mackey Arena crowd was involved and Purdue appeared to be on the verge of stealing the game.  Just nine seconds later, Burke countered Jackson with a quick drive and bucket of his own. Despite surrendering another layup to Jackson on the defensive end, the Wolverines remained poised. The next time down the floor, Burke found Hardaway between the left wing and the corner and the slumping sophomore fired a three and nailed it, cutting the Purdue lead to just one. Hardaway’s bucket finally inspired the Michigan defense to get a stop and provided a late chance at the lead. This time, the Michigan offense benefited from a bit of luck. Off of a deflected inbound pass under the bucket by Burke, the ball hit a couple defenders and then landed in the hands of Douglass, who flipped it up and in to once again give the lead back to Michigan. The teams then traded punches again, with Ryne Smith hitting a three and Burke responding with another nice drive and finish at the bucket. But the Wolverines got the last punch of this set of back-and-forth battle, as Hardaway made a hard drive in the lane and made a 5-foot jumper to give Michigan the one-point lead with 2:57 to play. In this sequence, the Wolverines scored on five straight possessions, and they needed each one to keep pace with the red-hot Boilermakers.

John Beilein continues to emphasize the importance of every possession and that couldn’t have been more true down the stretch at Mackey Arena. Purdue and Michigan continued to battle back and forth, trading baskets, and neither team would go away. With Michigan down by one yet again with under two minutes to play, this dunk by Jordan Morgan was the deciding bucket. Michigan begins this set with its typical high pick-and-roll look but there’s a twist, Zack Novak is acting as the screener. Burke gets some penetration before dumping the ball off to Novak, who uses his size and a pump fake to drive past Lewis Jackson, who switched onto Novak during the ball screen, and get into the lane. Hummel steps up to help and Novak makes the perfect drop off pass to Jordan Morgan. Morgan’s emphatic dunk gave the Wolverines the lead and a chance to seal the game on the defensive end.

5. Michigan’s defense holds down the stretch

After Terone Johnson missed the front end of a one-and-one, Morgan came away with the rebound. Michigan now had the ball with a one-point lead and a minute to play. In a rare occurence, Michigan’s freshman point guard and head coach don’t seem to be on the same page. John Beilein appears to be urging the Wolverines to slow things down while Trey Burke is in full out attack mode. I don’t think the stall-or-go decision is necessarily cut and dry but Burke is out of control on this play. Burke blows past Jackson off of Novak’s pick but ends up in the teeth of the Purdue defense.  Realizing he had nowhere to go when he got close to the bucket, Burke looked to dish it off to Morgan but the pass wasn’t there. Purdue came up with the ball after a scrum under the basket and had 40 seconds to play, down one with possession. Out of the timeout, Jackson found Ryne Smith, a 43% 3-point shooter, in the corner. Smith pump-faked, sending Burke flying, then let it go. The shot rimmed out, but the scramble for the rebound somehow landed back in the hands of Smith again. Purdue goes back to the Jackson-Hummel ball screen and gets another great look as Hummel fires up a three point shot. After Hummel’s shot hit back iron, Tim Hardaway Jr. secured what was probably his best rebound of the night. It was two open looks and two misses for Purdue but Michigan escaped.

Bonus Play: Wolverines seal it in the final 9.5 seconds

Michigan needed to waste clock and Purdue needed a steal or a quick foul. The Wolverines won this battle by managing to burn nearly six seconds off the clock before Purdue could apply a foul. Michigan passed the ball quickly up the court from Douglass to Burke to Hardaway to Smotrycz and could have perhaps made one more pass to Novak and sealed the game. Smotrycz held onto the ball and was finally fouled with 3.8 seconds to play. Making both freebies would have made the final seconds a bit less dramatic but Smotrycz just split the pair, missing the second. Purdue does manage a decent look, but the six seconds that Michigan bled off the clock proved invaluable, as Hummel pushes the ball ahead to Jackson who takes a running effort at a three point look.