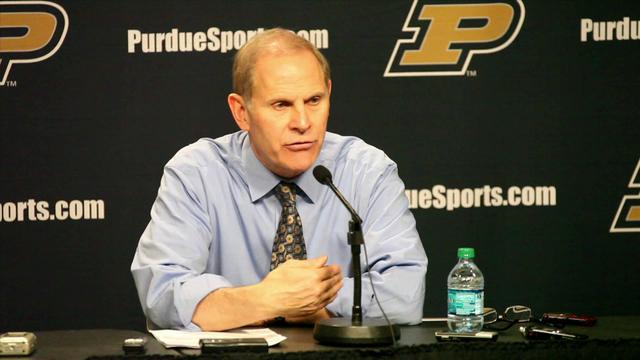 
“That’s four out of five…” [games coming down to the final possession] …” where the balls in the air and we could win or lose in that situation. We’ve been able to win three of those four. We feel very fortunate to beat a good Purdue team, a team that’s only had one loss at home, and we had a lot of adjustments today when they went with Robbie Hummel as a five man. We hadn’t seen it much, when you do the minutes it wasn’t happening very often but it was very difficult for us to guard. It was a great move by Matt and fortunately they missed some shots to allow us to get the rebounds and win the game.”

On Purdue taking the lead, any thoughts of ‘here we go again’?: “No not really. I was more focused on ‘what’s the best way that we are going to stop the shooting five man?’ How we can guard that and then you’re also trying to score points. That’s what I’m thinking.”

On learning from Arkansas and Indiana: “That’s tough to put your finger on. Our kids have to understand, not that we haven’t done this, that it’s a 40 minute game and you’re going to be in there. When you’re playing the teams that we’re playing it’s going to come down to the last second. So every possession, I think they understand, is very important and we try not to waste them. That’s really what they understand very well.”

On Stu, Evan and Tim bouncing out of their slump: “It was so ironic that one of the biggest shots we had was Stu’s right corner jump shot that we saw him really struggle with at Arkansas. Then Tim had a big one, after they answered, Tim answered. Evan hit a big one right for us after they had got the momentum going. You can say we didn’t shoot many, it wasn’t by design but they didn’t give us many open looks. We really had to work to get open looks.”

On timely scoring late: “You have to credit our little freshman point guard for that. A lot of those were because of him. We were running almost the same offense against each other, sometimes we had a shooting big and sometimes we didn’t. We were both doing a little bit of the same thing, scoring back and forth. It’s a different game how you have to adjust in the middle. We were adjusting on the fly some of them good, some of them bad.”

On whether the road win is a relief: “It’s a relief to win another game, but I don’t dwell on it. Only the great, great teams are going to win on the road continually. The ball bounced our way. This wasn’t a huge upset but we’re not a team that has so much talent that we can play poorly. We’re just learning all the time. We are learning how to make less mistakes and play better and realize that the degree of error is so small.”

On avoiding a losing streak: “I think the senior leadership of (Douglass & Novak) has been really big. During their freshmen and sophomore years, they saw some disappointing games. They’ve seen that and they won let us back down. We learned quite a few things from the Arkansas game that we can treasure.”

On Tim Hardaway Jr.’s big second half: “You can see that he’s getting more comfortable with physical play. His body has changed but he made a couple of muscle plays, and that last rebound was pretty good as well. When you can get into the lane against Purdue, it’s really hard. He got there a few times to give us a few extra points.”

On Lewis Jackson’s game: “We are seeing incredible point guard play in this league, both young and old. Between him and Tim Frazier, which one is faster? He adds an extra dimension to that team. Sometimes it’s not good to be 5-11, but when you’re that low to the ground, sometimes it’s hard for you to take charges.”

On upcoming road games: “I do know that we play Ohio State on the road because my wife told me she is going with me to Ohio State.  We’re just trying to get wins whether its home or away, it’s the same deal. The Northwestern game, if [Alex] Marcotullio makes free throws we may still be playing. Versus Michigan State if Draymond Green’s shot goes in, or if Trey’s shot goes in. Which would you rather have go in? This is the Big Ten. It’s just hard to win on the road no matter who you are. Ohio State is so talented and even they have two road losses.”

On Eso Akunne’s foot injury:  “We weren’t going to be able to play him. We are going to have to get an x-ray. Jon Horford practiced, was planning on making the trip, but elected to stay back home and workout. He didn’t want to sit around in a hotel room, so he just decided to stay home and that was a wise decision by him.”