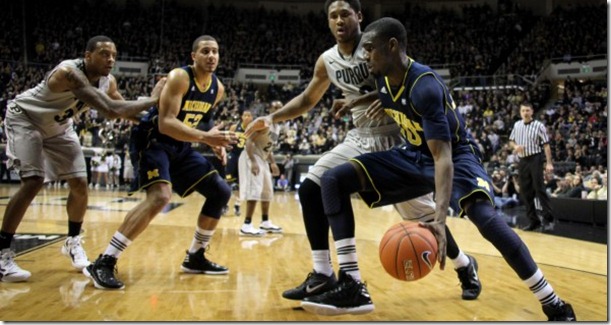 The UM Hoops mailbag is a collection of questions tweeted to us via Twitter (@umhoops), e-mail or via our Facebook page. Submit your questions at anytime and we’ll answer as many as we can in periodic updates like this.

@jlustig22: @umhoops How far can UM go relying on just 6 guys? Is Beilein not a believer in going to the bench often or does he not trust the reserves?

John Beilein has never been shy about riding his starters. In fact, his stronger teams usually have a much shorter bench than his weaker teams. I can only assume that this phenomenon is because he spends so much time experimenting with other options when things aren’t going as he would like – see 2009 with Grady, Shepherd and Merritt all playing significant time at one point in the season but not others.

Michigan actually played its bench even less last year and his best regular season team, the 2006 team that went to the Sweet 16, at West Virginia had less depth as well.

Here are the statistics for the percentage of minutes played by the bench (Bench Minutes/Total minutes) under John Beilein since 2005:

Beilein has high expectations and he’s going to play who he trusts at any given time. Right now he trusts his seniors, Zack Novak and Stu Douglass, he trusts his freshman point guard and he trusts Tim Hardaway Jr. Down low, Jordan Morgan is establishing that that trust while developing consistency and Evan Smotrycz seems to have carved out a niche as a “shooting five man” at this point.

Barring foul trouble or injuries, I think Beilein is comfortable sticking with these six players – with maybe one shift for Matt Vogrich – in the second half of big games. In the first half, he’ll try to buy rest for his big guns by using Vogrich, Carlton Brundidge, Blake McLimans and perhaps Jon Horford and Eso Akunne depending on their injuries. Vogrich is the guy that can play two positions, has some experience in big games, and seems like a potential player to take some of the burden off of Michigan’s top six. Brundidge is still probably a year away, McLimans provides some offense but struggles on the glass while Akunne is a bit limited, and now injured.

The top group isn’t changing and I think in any individual game Michigan can continue to survive in this fashion. Do you have to worry about Trey Burke wearing down? Sure, I think that’s a concern with any freshman that plays major minutes. However, if Burke plays 35 minutes per game rather than 37 minutes per game for the second half of the conference season I don’t see how that will have any tangible difference on his performance down the stretch.

The lack of depth is truly scary if Michigan were to experience any injuries in the backcourt. It would be extremely difficult for the Wolverines to survive an injury to any one of their top six players at this point because the options behind them on the depth chart aren’t prepared to make an impact.

@JG_82: @umhoops Do you think next year we will see McGary and Morgan on the floor together?

I don’t think that will be your standard lineup, and a lot depends on how Mitch McGary adapts to the offense, but I don’t think it’s impossible. Zack Novak has basically been this team’s power forward by the end of each of the last four seasons so small ball has become par for the course in Ann Arbor. All of the sudden, next season Michigan has significantly more options in the front court than in the backcourt. The combinations that John Beilein will be able to play with are fascinating.

You have: Jordan Morgan, Jon Horford, Mitch McGary, Evan Smotrycz, Max Bielfeldt and even Glenn Robinson III. Do you go with an uptempo small ball lineup featuring McGary at the five and Robinson at the four? Michigan’s lineup to start this year with Morgan and Smotrycz? Horford and McGary against bigger teams for a great rebounding frontline?

The options are seemingly endless and Beilein’s biggest problem might be fitting everyone together and keeping people happy. I think McGary starts the year learning the five position but if he adapts quickly could play the four position at times.

@wessamons: @umhoops What do you think is better option [redshirt for Horford or not]? I’m not sure a redshirt year from him helps much going forward

This is an intriguing situation for Michigan. Of the Wolverines three losses without Horford, I wouldn’t say any were because Horford was missing. With regard to Horford’s impact on this season there are a couple things to account for:

On the other hand, Horford was probably Michigan’s best rebounder on both ends of the floor in the games and minutes that he did play. I don’t think there’s any question that he’s a significant upgrade over Blake McLimans as a true five. Michigan still faces Ohio State twice, Michigan State again, there’s no doubt that Horford could be a very useful commodity in at least one or two of these games.

You also have to consider the future. Looking down the scholarship chart, a redshirt season would mean that Horford would graduate after the 2014-15 season. That roster features Mitch McGary as a junior, unlikely, Max Bielfeldt as a probable redshirt junior and Mark Donnal as a sophomore. Michigan is still recruiting bigs in the class of 2013 (see: Dominic Woodson) but it’s very likely that the 2014 class will have to feature instant impact bigs. If you redshirt Horford, you have someone lined up to bridge the gap.

Do you risk games this season for a potential scenario two or three years down the road? I’m not sure but it’s something that you have to consider along with how healthy Horford’s foot actually is.

@ali_maki:  @umhoops You mentioned something about Arkansas making the return trip next year, does that mean Michigan is making a trip to Iowa State too?

Yes. Michigan will play in the Preseason NIT at Madison Square Garden next fall – I believe Pitt is also confirmed for the same tournament – and will also face Cleveland State at home as one of the lead-in games for that tournament. The Wolverines will have the second leg of three home-and-home series that began this year as well. that means a home game against Arkansas and trips to Bradley and Iowa State.

There have been rumors of another neutral court game and Michigan is in line to get a home game out of the Big Ten-ACC Challenge. John Beilein recently mentioned that the Pac 12-Big Ten partnership could have an effect next season, perhaps right before the start of conference play.

@cb3899: @umhoops Do you think Hardaway Jr. will stay this year?

These situations are always very fluid. If Hardaway explodes over the final two months of the season and is projected as a sure-fire first rounder, he’d have to explore the option. I’m also more confident that Hardaway won’t make the sort of rash, seemingly uneducated, decisions that seem to be prevalent in the college basketball landscape. Tim Hardaway Sr. wasn’t just an NBA All-Star, now he’s an NBA scout. A scout that was actually scouting his own son on Tuesday:

Tim Hardaway — Tim Hardaway Sr. — was in Cincinnati on Jan. 23 to see Syracuse-Cincinnati and planned to be in West Lafayette, Ind., on Tuesday for Purdue-Michigan. Draft preparation in his life as a Heat scout.

Michigan has a player who could go in the first round. He’s a guard, too, and Hardaway knows a little about what it takes to play guard in the NBA. No report has been filed to the Miami bosses, though.

Hardaway added this on his son’s future:

Tim Sr. said his son won’t decide until after the season whether to return to school for a junior season or enter the Draft to continue the family legacy.

Hardaway has struggled for the last month or so and at this point he’s not high up on many, if any, draft boards. In public comments his dad has always commented on his game in a realistic, even harsh, manner. He doesn’t appear to be the type to plant false delusions of grandeur in Tim Jr.’s head. However, he’s on the radar and it’s impossible to know what will happen if he concludes this season in a similar fashion to the last one.