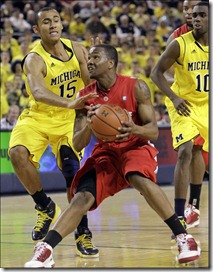 Michigan and Ohio State will face off on Sunday at Value City Arena in a battle for first place. We’ll have plenty of preview content over the next 72 hours but here’s a first look at the Buckeyes with Chris Lauderback, the resident hoops guru at Eleven Warriors. I also answered a few questions about Michigan, which should be live at 11W on Saturday.

Ohio State has been dominant in Big Ten games that it has won but dropped two early games on the road. The Buckeyes have played the easiest Big Ten schedule to date and still have six games versus Michigan State, Wisconsin and Michigan – the three other teams at the top of the Big Ten standings. Ohio State is obviously a great team but what’s your read on exactly how good?

Tough question. Not even Matta can answer confidently at this point. On nights when Sullinger, Thomas and Buford have it going, this team is virtually unbeatable, just ask Duke. The big three shot a combined 16/41 (59%), scoring 59 points in that 85-63 spanking led by Sullinger’s 21 and Buford’s 20 and they combined for 52 points in an 81-74 decision over Florida back in early November.

That said, those are the only two instances against decent foes in which the trio went off together. Sullinger missed the Kansas game due to injury while Buford had a terrible first half in the loss at Illinois behind Brandon Paul’s 43 point trey-fest. Buford never got going in the loss in Bloomington either though foul trouble plagued the big three in a masterpiece that could only be written by the conference’s worst official, Mike Sanzere.

The mixed bag of Buford’s inconsistency to date and the lack of a consistent three point threat to complement Buford on the perimeter and give Sullinger and Thomas more room to operate will most likely be to blame if the Buckeyes fall short of the Final Four.

Still, all college teams are flawed these days as kids bolt for the draft before they’re ready and Ohio State has as good a chance as anyone to cut down the nets. Last year, they were the best team in the field, proving the best team doesn’t typically win. The hottest team drawing the best matchups and a little luck usually cuts down the nets. They are certainly in the discussion as a candidate to be that team this year just as they could have another off night against an athletic team, getting knocked out earlier than they should.  One things for sure, it’s Final Four or bust or whispers about Matta not being able to win big in the Dance will become a little louder.

Tell me about Deshaun Thomas. He’s emerged as a top level scorer in this league, what are his strengths and weaknesses?

Thomas has grown more than any player on the roster from last year to now. The biggest reason for his improvement is an improved basketball IQ. A born scorer, he was a poor decision maker a season ago, coming off the pine and immediately jacking it up. He led the team in shots per minute in a way that would make Nick Nolte proud.

After going for nine points in the season opener, he went for double figures in 13 consecutive games including a career high 30 in an eight point on the road against South Carolina. That effort was huge as Sullinger played just six minutes after injuring his foot and Buford hit just 5/14 from the floor. Thomas knocked down 13/16 from the floor and scored 20 points in the 2nd half. He also kept OSU in the loss at Illinois with 23 points on 8/12.

Improved shot selection is entirely to blame for his breakout year. He’s virtually abandoned taking rushed shots instead taking threes when he’s either wide open or in the zone. Inside the arc, he has excellent body control on moves through the paint or in transition and he knows which spots on the floor yield a high shooting percentage. He’s got an impressive soft lefty jump hook, hits the baseline jumper with confidence and has a growing midrange game, not needing to put the ball on the floor before taking a shot from foul line extended. His improved floor game has him shooting 54% after shooting 48% as a freshman and he remains an active offensive rebounder.

He doesn’t have any huge holes though he’s shooting just 34% from distance and 72% from the stripe. He can be had if matched up against a smaller defender on the perimeter and he’s been in foul trouble a few times but is capable of defending players taller than him in the post.

The point guard battle is going to be the No. 1 story here. Columbus native Trey Burke returning home to face one of the conference’s best in Aaron Craft. Who do you like in this match-up and what are your feelings as an Ohio State fan seeing Burke succeed early on in his career in the Maize and Blue?

I was just talking about this match-up with some readers today and simply based on the facts Craft is a sophomore, has a better supporting cast and is playing at home, I think he comes out on the winning side. I’m sure Burke will put up more points but I expect Craft to get physical with Burke, making it sometimes difficult for Michigan to initiate the offense, creating a few turnovers in the process.

As far as my feelings on Burke. I’m glad the kid is doing so well. I’m not shocked in the least. For me, it’s impossible to hate on the kid for going to Michigan because I’m smart enough to realize Ohio State didn’t pursue him. I hope he has a great career minus the times he matches up against the Buckeyes.

Ohio State is the No. 1 team on KenPom and has been dominant at Value City. That said, there has to be some sort of Achilles’ heel, right? If you had to pick one weakness to exploit, what would it be?

If I’m an opposing coach, I’m putting my best perimeter defender on Buford and doing anything I can to keep him from getting into a rhythm. He’s shown he’s capable of staging a brick fest featuring bad shots and turnovers whereas Sullinger and Thomas have been far more steady.

If you can take Buford out of the game or at least severely limit his effectiveness, that puts a lot of pressure on a replacement third scorer to help Sullinger and Thomas put up points.

Craft isn’t often going to be that guy and Lenzelle Smith is far from a consistent point producer, reaching double figures just twice all season, both against Indiana, including 28 in the rematch in the Schott. That leaves a host of guys on the bench that have seen their places in the rotation, well, rotate.

Sophomore Jordan Sibert got the first crack at being a perimeter scorer off the bench but all he did was get his clank on, shooting 28% from the field. Sam Thompson was up next and has put a stranglehold on the first guard off the bench role but he’s not a shooter. Instead, he’s a high flying dunking machine who’s also active on help defense but at 11 minutes per game, his offensive repertoire understandably needs expansion.

So, very long story short, load up on stopping Buford and gamble none of the reserves catch fire in aid of Sully and Thomas.

William Buford seems to have been a game changer in at least three of the last four games that Michigan and Ohio State have played. However, he seems to have regressed, or plateaued, a bit this season. Is that a fair assessment? How would you rate his performance this season and what do you expect from him against Michigan?

I think that’s a fair assessment. For all the talk of how losing a deep threat is more likely to hurt the inside game, Buford has missed Diebler the most.

With Diebler gone, Buford has pressed in an effort to be the consistent #2 scorer and deadly outside threat giving Sully and Thomas more room to exploit matchups in the paint.

What can’t as easily be attributed to Diebler’s exit is Buford’s penchant for bad shots and unforced turnovers. He has simply made poor decisions with the basketball at a much greater clip than a season ago. His turnovers are up just slightly from 1.8 to 2.0 but the timing of his miscues have been huge. He (and Craft) cost OSU big time in the last minutes of both halves in the loss at Bloomington with turnovers and a ridiculous 22 foot three point try on the final possession and he had four turnovers in the loss at Illinois.

Right now, he’s grading no better than a B- / C+ on the year based on expectations.

As such, it’s hard to say how he’ll play against Michigan. He’s played fairly well against the Maize and Blue and was really good in the first match-up last year going for 19 and 9 in a four point win in Ann Arbor.

Lately, he’s started games going to the rack instead of trying to shoot himself out of a slump. I hope that trend continues Sunday. As a Buford apologist, I’ll just say I’m cautiously optimistic that the WB’s going to give the Buckeyes 17+ in a six point win.