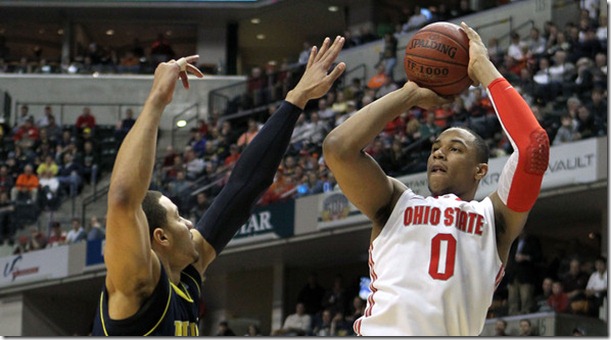 Exactly 366 days ago, Michigan traveled to East Lansing and rattled off an upset over Michigan State at the Breslin Center. Seemingly overnight, that win changed the trajectory of the Michigan program. After starting last season 1-6 in conference play up to that point, Michigan is now 13-5 in its last 18 Big Ten games and a program that appeared to be drowning is now surging in the opposite direction. Tied atop the Big Ten standings, the Wolverines are presented now with a new opportunity. The odds are even longer than those they faced a year ago but a win in Columbus could provide a similar spark for the 2011-12 season.

Michigan came close to upsetting Ohio State last year. The Wolverines lost by four points at home, trailed by just four points in Columbus with under six minutes to play and just two points with nine minutes to play in the third match-up during the Big Ten Tournament. One thing was very clear over those three games: it will take a nearly perfect game for Michigan to upset Ohio State. One lapse that lasts three or four possessions is all it takes for Ohio State to break the game open into an easy double digit win.

Yes, the teams are different. Darius Morris, David Lighty and Jon Diebler’s roles have been replaced by Trey Burke, Deshaun Thomas and Lenzelle Smith but the theme remains the same. This is still an uber-talented Buckeye team that features a dominant big man, Jared Sullinger, and an array of slashing wings that can shred opposing defenses and a handful of McDonald’s All-Americans playing complementary roles on the bench for good measure. On an individual talent level, there’s probably not a match-up that favors the Wolverines on paper. Ohio State has won 37 games in a row at home, Michigan has won one game on the road this season. The Buckeyes are ranked as the nation’s best team in Ken Pomeroy’s rankings, Michigan is ranked 33rd.

Ohio State’s offense is great but its defense is dominant. The Buckeye defense ranks first in Ken Pomeroy’s adjusted ratings and is allowing roughly .13 points per possession less than the second best Big Ten defense, Michigan State. That’s just a hair less than the margin that separates Michigan State and the Big Ten’s worst defense, Northwestern. Ohio State has the league’s best effective field goal percentage defense, forces the most turnovers and grabs the most defensive rebounds. The two weaknesses of the Buckeye defense aren’t really weaknesses, they are more subtle areas where Ohio State isn’t completely dominant. Those areas are defending the three, Big Ten opponents are shooting 31.9% (5th B10) from long range, and allowing a free throw rate (FTA/FGA) of 29.9% (4th). Those statistics could measure out as strengths for more average Big Ten opponents.

While Ohio State’s defense appears to be significantly improved over a season ago, its offense has taken a slight step back mostly because the 2011 Ohio State offense was nearly unstoppable. The primary area where the Buckeyes have regressed offensively is three point shooting. They don’t attempt as many threes, roughly one quarter of their field goal attempts come from long range, and their Big Ten three point shooting percentage is down to 36.3% from 45.2% a year ago.

Three players account for roughly 80% of Ohio State’s shots: Jared Sullinger, Deshaun Thomas and William Buford. Sullinger and Thomas both make over 60% of their twos while Buford leads the team in three point attempts (38.6% on the year) but is less efficient inside (45.9% on twos). Aaron Craft isn’t a scorer (8.1 ppg) but runs the team, hits big shots and is the best defensive guard in the Big Ten. Lenzelle Smith Jr. is the fifth starter, an athletic guard that does a bit of everything and somehow shoots nearly identical percentages on free throws (48.8%) and three point attempts (48.6%). Boston College transfer Evan Ravenel is Sullinger’s primary backup while Sam Thompson has emerged as a super sub and has the athleticism to rival anyone in the Big Ten.

Trey Burke will obviously be motivated to excel in his first collegiate game in his native Columbus. Family and friends, even friends on the other team, a chance to prove himself to the hometown coach who didn’t offer him a scholarship. All of these storylines are little more than distractions. The match-up at hand is difficult enough without all of the peripheral issues. Craft is arguably the best defender that Burke has faced – Darius Morris had 16 turnovers in three games against OSU last season – and Michigan needs a strong game on both ends from its freshman floor general.

Michigan’s strategy against Ohio State last season was to throw everything at Jared Sullinger and make the other four Buckeyes beat them. Michigan did a decent job of slowing down Sullinger, who averaged 15 points over the three games but turned the ball over 11 times. (An impressive stat considering he had just 24 turnovers in his other 20 games against Big ten competition). The Wolverine plan fell apart for two reasons: Sullinger was dominant on the offensive glass and William Buford stepped up to provide 16 points per game.

Michigan will still throw an array of double teams at Sullinger, especially given the fact that the Buckeyes don’t have a comparable arsenal of three point shooters to last year’s team. You can hope to slow Sullinger down but you are never going to eliminate him completely. Stopping Ohio State’s other threats, namely Thomas and Buford, might actually be more important. Hardaway has the size and talent to match-up with Buford but I think Douglass will draw the defensive match-up. Buford can shoot over him but Douglass has been more steady on and off the ball. Novak will guard Thomas and will have to be physical despite Thomas holding a size and athleticism advantage. That leaves Hardaway defending Smith and that means he’s likely to be the most aggressive player doubling down on Sullinger, which could be advantageous given his length.

Michigan will need its best performance of the season to pull off the upset in Columbus. A win isn’t impossible but it’s tough to disagree with Ken Pomeroy’s computers which give the Wolverines a 6% chance at upset glory. Pomeroy says Ohio State by 17, lets hear your predictions.

Luke Winn moves Michigan up to No. 10 in his power rankings and accurately notes that John Beilein’s team rarely plays zone defense.

This year’s Wolverines are heavily man-to-man, though, playing 87.9 percent of their possessions in man according to Synergy.

What’s curious is that, in a small sample, Michigan’s defense has been much better this year in zone, holding opponents to 0.667 PPP using a combination of 2-3 and 1-3-1, as opposed to 0.856 PPP in man. Beilein seems to be employing the zones as a very effective changeup, in groups of just a few possessions at a time.

I don’t think the success of the zone looks are a sign that Michigan should jump into constant zone defense. I do think that it’s a good change of pace, especially when things aren’t going well, and that we should see more zone in Columbus than we have in recent games – especially the 2-3 – given Ohio State’s advantages inside and lackluster three point threats.