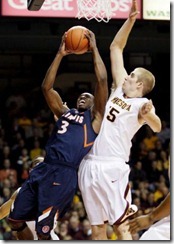 Data from StatSheet.com and KenPom.com.

At the midway point, Ohio State and Michigan State continue to be head and shoulders above the rest of the league. The Spartans are doing it with offense and the Buckeyes are doing it with defense. Both earned the sort of national praise (linked above) that one would expect for leading the country’s best conference. The conference leaders have yet to face off head-to-head but those two contests (Feb. 11, Mar. 4) are all but certain to have a dramatic effect on the Big Ten title race.

There might not be two hotter teams than Wisconsin and Minnesota. Both squads got off to dreadful starts, 1-3 and 0-4 respectively, but are surging back into conference relevance. Not only is Minnesota nearing .500, the Gophers are actually ahead of Illinois, Indiana and Purdue in the efficiency margin column. Minnesota’s improvement has come on the defensive end of the floor while Wisconsin has dramatically improved its offensive output.

Speaking of one sided improvement, Indiana’s resurgence continues to be marred by a lack of defense. The Hoosiers surpassed 100 points, scoring 1.39 points per trip in a 74 possession win, against Iowa but surrendered 1.20 points per trip on their own. That might be acceptable against the conference’s worst defense but there are serious questions to be answered about this Hoosier defense that ranks 8th or worse in all four factors.

Given Michigan’s tendency to play right around .500 basketball of late, it should come as no surprise that the Wolverines are creeping toward an efficiency margin of 0 as both their offense and defense trend toward the conference average of 1.02 points per possession. Still, Michigan is one of just four conference teams that has an above average offense and defense. – Dylan Burkhardt

Four games into the Big Ten season, most people had written off Wisconsin for dead. The Badgers were fading fast after dropping two rare games at the Kohl Center and being dismantled by Michigan on January 8th. Now, three weeks later, the Badgers have rattled off five straight wins and are back in the hunt for a Big Ten title. After a 67-63 win at Illinois on Jan. 22 and a 57-50 win at home against No. 17 Indiana on Wednesday, Wisconsin is now tied with Michigan at 6-3 in the league and could be playing for a share of first place when it hosts Ohio State next weekend. – Kevin Raftery

Izzo said all week that the milestone really didn’t mean much to him, but in the waning moments of the Spartans’ 68-52 victory over Minnesota on Wednesday, the tears on his face gave a different story. After the game, Izzo thanked everyone who has helped him along the way, but also joked that he’s still over 500 wins away from Duke’s Mike Krzyzewski. Regardless, 400 wins is impressive, and you’ve got to give props to Izzo and what he has done at Michigan State in the last 17 years. A National Championship, six Final Four appearances and six Big Ten Championships isn’t too shabby. – Kevin Raftery

With three games decided in the closing seconds this week, it was tough to pick just one. But this game gets the nod if not solely for how it finished during regulation. After Minnesota led by as many as 10 in the second half, Illinois clawed back and led for nearly all of the final seven minutes of the game. But with five seconds left and the Fighting Illini up by three, Minnesota’s Austin Hollins drove hard to the rim and flipped up a circus shot high off the glass over Illinois’ Sam Maniscalco. The shot dropped, and Hollins drew the foul. He hit the free throw to send the game into overtime. The Golden Gophers took their new-found momentum into the extra frame, outscoring Illinois 13-8 for the victory. The overtime victory meant that Minnesota and Illinois played 15 minutes of extra basketball over their two games after the Illini won the first match-up in Champaign in double overtime. – Kevin Raftery

Disappointment of the week: Northwestern loses its third straight to fall to 2-6 in the league.

After a signature 81-74 win over then-No. 7 Michigan State on Jan. 14, Northwestern has continued to fall back to the cellar of the Big Ten standings. Following the victory against the Spartans, the Wildcats were blown out by Wisconsin and Minnesota, and on Saturday lost a nailbiter, 58-56 to Purdue. Northwestern, which has never made it to the NCAA Tournament, seemed like it may have what it takes to make it to the dance this year. Before the win against MSU, Northwestern nearly knocked off both Illinois and Michigan, losing in the closing seconds to both. But now, barring a huge run in the second half of the season, it looks like the Wildcats are bound for yet another NIT appearance. – Kevin Raftery

In the Boilermakers’ 58-56 win over Northwestern, Hummel didn’t have his best game statistically — he was 5-of-11 from the field with 11 points, four points below his season average — but he scored when his team needed him most. With 10 seconds remaining and the score tied, Hummel drove the baseline, right into Northwestern’s Davide Curletti. Curletti immediately got a hand in Hummel’s face, but it didn’t matter. Hummel dropped in a ridiculous teardrop over Curletti’s outstretched hand and Purdue went on to win by two. After sitting out all of last season with an ACL tear, Hummel’s numbers are down this season from what they were two years ago, but he still has proven to be one of the best players in the league, and this is just another example of how. – Kevin Raftery

For the third straight week, Michigan has garnered the honor of appearing in this category. Maybe we’re a little biased, but how could the Wolverines not be featured when in each of the past three weeks, they’ve played either Michigan State or Ohio State? And when there has been serious implications regarding conference standings each time? Last time the Wolverines and the Spartans met, Michigan came away with a 60-59 victory at home. This time, Michigan will head to East Lansing, where the Spartans will be licking their chops for revenge. Michigan State currently sits a half game ahead of Michigan with a 6-2 record. With the Wolverines’ loss to first-place Ohio State (7-2) Sunday, they’re now tied for second place with surging Wisconsin at 6-3. There will be no lack of motivation for either team come Saturday. – Kevin Raftery