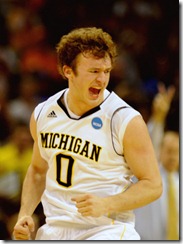 It’s almost February and Selection Sunday is just 40 days away. As crazy as it seems, it’s time to start thinking about the NCAA tournament. Halfway through the Big Ten season, Michigan is in great position to not only make the tournament but to earn a high seed. As of now, most bracketologists have Michigan slotted somewhere between the four and seven seed lines.

With nine games still remaining in the Big Ten season, there’s still a lot of basketball to be played for every team. Michigan’s position could move dramatically in either direction over the next month and a half. The Wolverines have won just one true road game (although the NCAA’s official RPI metrics include Oakland as a road game) and will certainly have to earn a high seed with five road games left on the docket.

After the jump find an in-depth look at Michigan’s resume, a roundup of what notable bracketologists says about the Wolverines thus far, a look at the Big Ten’s NCAA tournament worthy teams and more.

Every week leading up to Selection Sunday, we’ll have a full run-down of predictions from some of the nation’s most widely-read bracketologists. Here’s a look into what each expert is saying as we prepare to enter February.

We’ll also keep a close eye on the rest of the Big Ten and let you know who’s in, who should be in, who could be on the bubble and which games this week have the biggest tournament implications. If the season ended today, the Big Ten would likely put eight teams into the Big Dance.

Following its victory on Saturday against Eastern Illinois, Murray State is now the only unbeaten team in the nation and is ranked in the top 10 for the first time in school history. Still, even with a perfect record heading into February, the Racers are projected as low as a 10 seed in some tournament projections. This brings up the age old debate: how should a team with a great record from a small conference (Murray St. is in the Ohio Valley Conference) be seeded come tournament time? As of now, the Racers have just two wins against Top 50 RPI teams – Memphis and Southern Mississippi – and 15 of their 21 wins have come against teams with an RPI of over 150. However, on Monday the Racers were selected to take on No. 18 St. Mary’s as part of ESPN’s Bracketbusters series on Feburary 18th. A win against St. Mary’s would no doubt strengthen the Racers’ resume, but will it be enough to earn them a high spot in the tournament? Should Murray St. remain unbeaten, it’ll be a unique test for this year’s Selection Committee.