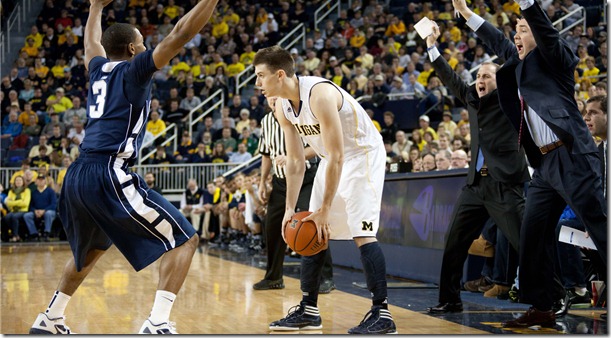 In this post we take a look at the Wolverines’ performance in Big Ten games. In what facets has this Michigan team struggled and excelled and where it should improve or regress over the final two months of the season. We also take a look inside the conference numbers to breakdown some individual Wolverine performances thus far.

A Closer Look at the Profile

John Beilein has emphasized the value of every possession in almost every pre- and post-game press conference since the beginning of Big Ten play. He points out how the majority Michigan’s league games have been decided in the final one or two possessions and that his team needs to embrace the concept. The numbers show a team that is embodying Beilein’s philosophy.

Wisconsin is the only Big Ten team playing at a slower pace than the Wolverines. Naturally the fewer possessions in a game, the more importance that’s placed on every individual possession. To further that importance, the Wolverines are winning the turnover battle. Not turning the ball over has been a staple of Beilein teams, and that hasn’t changed, but this team also ranks third in forcing turnovers.

Beilein’s teams have traditionally been maligned for their rebounding inabilities but this team is rebounding right at the conference average. The defensive rebounding numbers took a big hit versus Ohio State but Michigan more than held its own on the defensive glass against the likes of Wisconsin, Minnesota and Purdue.

As for free throws, don’t look to Ann Arbor. Michigan gets to the line less often than any other Big Ten team but also allows the lowest ratio of free throw attempts in the league. The Wolverines ability to avoid fouling is a testament to their experience and discipline, especially given the high forced turnover rate. However, the inability to get to the line is certainly a product of leading the league in percentage of three point attempts.

The Wolverines are doing a good-to-great job in most of the peripheral statistical areas but at the end of the day the game boils down to shooting. Michigan is the third worst three point shooting team in the conference despite attempting a Big Ten high 43% of its field goals from outside. Three point shooting has been the Achilles’ heel of the Wolverine defense as well, Big Ten opponents are making 38.4% of their three point attempts.

It’s tough to win consistently with below average shooting but the Wolverines three point shooting woes can be looked at in one of two ways. The negative, maybe this team just can’t shoot. The positive, this team does a good enough job in other areas that they could be very dangerous if a few more threes start falling.

Michigan’s first nine games ranked 5th in the league in terms of strength of schedule and while the back half appears a bit less strenuous, there are still five road games to just four home games left on the slate. In order, here’s Michigan’s final nine games:

Indiana, at Michigan State, at Nebraska, Illinois, Ohio State, at Northwestern, Purdue, at Illinois and at Penn State

Zack Novak told reporters early in the season that one of Michigan’s season goals was to go undefeated at home. With four home games to play, that goal is still very possible. Indiana, Purdue and Illinois look like games that Michigan should win at home while Ohio State is a typical game that Michigan could win at home. The Wolverines played with the Buckeyes in Columbus despite a horrendous rebounding effort and a massive free throw disparity and, with a prime time game back home at the Crisler Center, a home upset seems possible if not likely.

Michigan has just one Big Ten road win so it’s tough to slide any road game into the win column immediately. Michigan State is as tough as it gets but Northwestern, Nebraska and Penn State are games that typically fall into the “winnable” road game category. Illinois is one of two Big Ten teams that Michigan has yet to play and the pair of teams split last year with Michigan getting a monumental comeback victory in the Big Ten Tournament.

Some individual observations half way through league play: