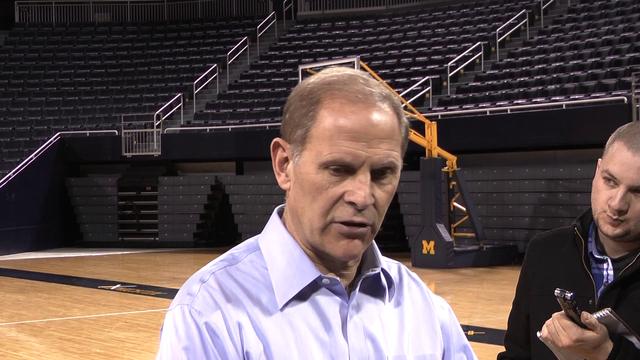 John Beilein met with the media this afternoon to discuss Michigan’s Wednesday night rematch against the Indiana Hoosiers. Beilein did provide an update on Jon Horford’s status, noting that the sophomore big man is still not cleared to practice full court. Watch Beilein’s press conference in the embedded media player below:

Quotes via MGoBlue.com
Opening statement … “We have a monumental task here tomorrow. Indiana is a very talented team. Coach Crean has a great plan for them and they’ve been scoring. They scored over 100 the other night, they’ve been averaging 78 a game, much like Ohio State averaging the same numbers. We really had trouble adjusting to how quickly they play, and as a result it got us down big. We fought like crazy, but it wasn’t enough. We know we have to do a much better job of handling their pressure offense. They put pressure on you on offensively, and we have to be able to adjust to that.”

On Indiana forward Cody Zeller and the Hoosiers’ veterans … “He’s just really good, and been good for a long time. He just gives them that finisher around the basket. When all breaks down and they can just throw it to him, he knows what to do with it deep in the post. He passes it okay. He’s got a good touch on the 12-feet-and-in catches that you just have to put in. He’s been a big difference for them, and I’ve spoken before about their experience. Their minutes played in the Big Ten are probably the biggest of anyone in the league because they have so many juniors and seniors playing, and even the sophomores played a lot when they were freshmen.”

On the starting lineup going forward … “I’ll go with the same starting lineup tomorrow. The rest of the way depends on how people are playing and what they’re doing. But I like the defense that we can come out with. I like the matchups that we may be able to sometimes turn in our favor. I think we’ve gotten off to pretty good starts with this lineup every time that I can recall, except for Arkansas. Last time against Indiana, we got off to a bad start. (Indiana forward Christian) Wattford is having a fantastic year. They’re the second or third leading three-point shooting team in the league and you’ve got to get to them in a hurry. So we’re putting as quick a team as we can out there.”

On approaching the second half of Big Ten play as a new season … “I don’t look at it that way, I look at it one day at a time. Because this is as good a year as there is in the Big Ten. I think the projections have eight teams in the NCAA Tournament. I can’t recall that ever happening. I can recall four, five, six, and last year there might have been seven, but you’ve just got to take each day and just say, ‘We have to make today our day — today’s the day we get better,’ and see what we can do with it. I know it flies by; I know we’ve got five weeks left and six if you count the tournament. With four practices a week, that’s 24 times to get better, which is what I focus on, and then the games just take care of themselves.”

On the resiliency of the team to win the next game after each loss this season … “I was very happy with how receptive we were yesterday to a very instructional film session, and just to talk about where we are right now and what we can do best to improve. We’re coaching their brains a lot — we coach their brains and their heart right now about what it takes to be winners. There’s a lot of courage involved, a lot of toughness involved and there’s a lot of intelligence involved. If they put that all together, how can you be anything but resilient? It’s a new day, a new game, bounce back, get over it, and let’s play.”