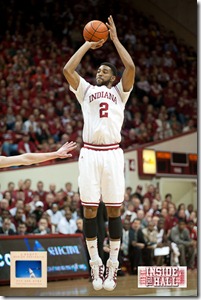 Michigan hosts Indiana tonight in its first Big Ten rematch of the season. The Wolverines fell at Assembly Hall by a final score of 73-71 on January 5th and that game was the second worst defensive performance for the Wolverines in Big Ten play. Michigan is 4-2 since that game while the Hoosiers have dropped four of seven since beating the Wolverines at home. Successfully defending home court would allow Michigan to remain in the Big Ten title hunt but a home loss would send them into the tangled middle portion of the Big Ten standings.

This Indiana team isn’t significantly different than the team Michigan faced in early January but some weaknesses have emerged more clearly in conference play. The Hoosiers are surrendering 1.10 points per possession defensively, the second most in the Big Ten, and haven’t been particularly good at any of the four factors defensively. Indiana ranks tenth in effective field goal percentage defense, ninth in forced turnovers, eighth in defensive rebounding and eighth in free throws allowed. All of those numbers fall in the bottom third of the league and Michigan’s offensive performance, which was solid in the first meeting, should only improve at home.

Offensively, the Hoosiers still love to push the ball – averaging 66 possessions per game in Big Ten play (3rd) compared to Michigan’s 59.6 (11th) – and can flat out shoot it. Indiana can shoot it inside (51.6% 2pt, 2nd) and outside (41.4% 3pt, 1st), is a strong offensive rebounding team (33.4% off. rebounding rate, 4th) and gets to the free throw line (36.2% FTA/FGA, 4th). Michigan’s problem in the first meeting was that Indiana barely missed, making 53% of its twos and 64% of its threes. The only reason the Wolverines were able to mount a comeback was that Indiana coughed the ball up on 23% of its possessions. The turnover struggles in the first meeting are no outlier for this team as the Hoosiers have given the ball away on 20.4% (10th Big Ten) of their offensive possessions in the league games.

One notable difference between Indiana then and now is that sixth man Will Sheehey is healthy again. Sheehey is a 6-foot-6 wing guard that excels getting to the free throw line but also knocks down 44% of his three point attempts. I touched on the individual match-ups quite a bit in the first preview but the two players that killed Michigan in the first match-up were Cody Zeller and Christian Watford. The starting four and five men for Indiana combined to score 43 points on 21 shots but Michigan did a pretty good job of  defending the other nine Hoosiers that played in the game. Verdell Jones III had six assists and the game winning jumper but also had four turnovers. Victor Oladipo struggled offensively (2-10) but did a great job defensively on Tim Hardaway Jr. Jordan Hulls was mostly neutralized (3pts) but was one of four Indiana players that made their only three point attempt on the night.

Like almost every other Big Ten team, Indiana and Michigan are drastically different teams when they venture out of their home gyms. Indiana is 1-4 in Big Ten road games while Michigan is 1-3. The Hoosiers have been outscoring teams at home by the same margin they’ve been outscored on the road. Michigan is also dominant at home as the Wolverine defense is incredible within the friendly confines of the Crisler Center.

Michigan should be able to score the ball against Indiana effectively. The Wolverines should be able to control the tempo and play better transition defense against the Hoosiers at home. This is a game that a team like Michigan should expect to win at home.On the other hand, Indiana is a scary team because of just how quickly they can put up points – see Sunday’s 103 point performance at Iowa. The first thing to watch is how Michigan approaches defending Zeller and Watford. The small ball lineup leaves Novak on Watford and Morgan on Zeller and double teaming or playing zone leads to open three point looks for Indiana’s shooters. The strategy on Watford is a bit counter intuitive at first glance: make him shoot twos instead of threes. He’s hitting 57% of his three point attempts in road games this season while making just 36% of his two point attempts.

As one home game sandwiched between five road games, this is a pivotal game for Michigan. Defending home court is obviously critical and a win would allow Michigan to continue to tread water in the top third of the Big Ten. A loss would be Michigan’s first losing streak of the season and make Sunday’s game in East Lansing that much more important. Pomeroy likes Indiana to pull off the road upset, but just barely, predicting a 71-70 Hoosier win.

John Beilein indicated that he’ll stick with Stu Douglass as his fifth starter versus Indiana. Jon Horford remains sidelined with a foot injury and has yet to be cleared for full court action.

You can vote for John Beilein in the Infiniti Coaches Challenge, if Beilein wins then $100,000 will be donated to the St. Louis Center. Zack Novak was nominated for the Senior CLASS Award but is trailing, you can vote here.

Gus Johnson will be calling tonight’s game and the Big Ten Network will broadcast the BTN Tip Off Show Live from the Crisler Center at 6 p.m.