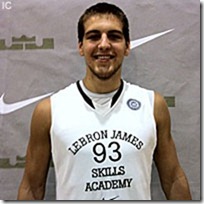 ScoutHoops.com published updated Class of 2012 recruiting rankings on Tuesday afternoon and Michigan’s commitments were all on the move. Mitch McGary fell from the No. 2 slot to No. 20 but is still regarded as a five star prospect. Lake Central forward Glenn Robinson III rose all the way the No. 27, two slots short of a five star rating. Finally, Nik Stauskas moved into the top 100 in the No. 83 slot and picked up a fourth star.

Read after the jump to find out about Derrick Walton’s big night, Mitch McGary’s recent performances, John Beilein stopping in to watch a blue chip 2015 prospect and more.

It was a big night for Michigan’s 2013 point guard commitment as Derrick Walton exploded for 34 points, 11 rebounds, 10 assists and seven or ten steals in an 80-56 win over Detroit Cesar Chavez. The final steal tally is up for debate with multiple sources, including Walton’s father and coach, reporting 10 steals but other outlets reporting seven steals.

The debate will certainly rage on but it’s another big night for the lightning quick floor general who has had a tremendous junior season. A triple double, nonetheless a quadruple double, is impressive in a 32 minute high school game.

John Beilein was on the road recruiting Friday night in the state of Ohio (pictured top). Michigan’s head coach was watching 2015 phenom Luke Kennard, a  6-foot-4 freshman from Franklin, OH. Kennard is averaging 17 points per game for Franklin High School and he’s surpassed 20 points in seven games, reaching double figures in all but two. Kennard scored 22 points in Friday night’s win over Valley View to move his Franklin squad to a perfect 14-0 on the season.

Kennard has already visited Ann Arbor several times and recently noted Michigan as one of the teams recruiting him the hardest:

“I’ve visited Ohio State, Michigan a lot, and I’m taking a visit to West Virginia and Michigan State,” he said.

Asked if any of those schools have made firm scholarship offers, he said, “Michigan has really talked to me a lot (about that), and so has Ohio State. But not as much as (UD).”

Mitch McGary fell from the No. 2 spot in national rankings at both ESPN and Scout to the 20 range and struggled on national TV against super recruit Nerlens Noel but he has put together a couple solid performances of late. McGary had 12 points and 12 rebounds in a win over South Kent and 15 points and nine rebounds in a win over Bridgton. He may not be an elite scorer but he will provide an immediate impact with his size, energy and rebounding ability. Here’s Evan Daniels of Scout.com:

“I think we may have gotten a little aggressive after the summer (with McGary), he had a terrific summer, but there are concerns,” Scout.com’s national basketball recruiting analyst Evan Daniels told AnnArbor.com. “His lack of ability to score consistently is one, and maybe we over-valued him a little over the summer.