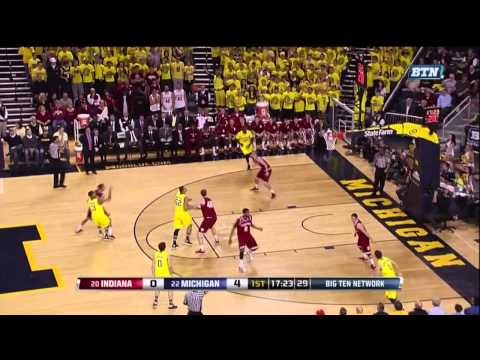 Indiana has one of the Big Ten’s best offenses, entering Wednesday’s games on the heels of a 103-point performance against Iowa, and it was clear that Michigan was going to have to score more than usual to win. No problem. The Wolverines came out of the gate red hot and set the stage with a quick 13-0 start. Trey Burke started the run with a nifty spin move in transition. Stu Douglass got involved in the next Michigan possession and showed off a bit of his maturation as a player. Off a pass from Novak in transition, Douglass had an open look at a three from the wing but realized he had a better option. Instead of pulling the trigger, he drove to the basket and finished with an easy layup. That’s a play that a younger Stu Douglass wouldn’t have made. From there, Burke took over. Off a handoff from Novak, he drilled a three just inside the block M to make the score 7-0 Michigan. He stayed hot on the next possession, hitting another three, this time from the left wing off of a pass from Tim Hardaway Jr. To cap the run, Novak changed his role from passer to shooter and hit a three from the right corner off a nice look from Douglass. Just over four minutes into the game Michigan held a 13-0 lead and looked poised to cruise to an easy victory.

2. Zack Novak’s three at the end of the shot clock and Tim Hardaway Jr.’s alley-oop halt first half Indiana run

After jumping out to a big lead, Michigan became the hunted not the hunters and it was almost inevitable that the Hoosiers were going to make a run. Late in the first half, Indiana had made its first response. The Hoosiers were in the midst of a 9-0 run and had cut a 20-point Michigan lead to just 11. They were gaining momentum and Michigan needed a response late in the half. This play was far from what John Beilein drew up – after the game he called it “the worst zone offense in the history of zone offenses” – but it ended in three critical Michigan points. After the Wolverines had run down the shot clock without coming close to a good look at the basket, Novak was forced to jack up a three from the top of the key with two defenders in his face. It was a lucky shot but it was one of the most important baskets of the game for Michigan. A of couple possessions later, a much prettier play helped keep the Wolverine lead in double digits before the break. Hardaway received the ball at the top of the key and passed the ball to Burke on the wing before cutting to the hoop off of Evan Smotrycz’s back screen. Burke found him for one of Michigan’s best dunks of the season, an emphatic alley-oop, and the Wolverines went into the break with an 11-point advantage.

3. Wolverines respond after Indiana cuts the lead to two

While Indiana is very capable of putting together quick runs to get back in the game, Michigan also has the ability to put up points quickly. The Wolverine lead was down to just two points with 13 minutes to play after another Hoosier run. The comfort of a big lead was gone and this was a ball game. Michigan didn’t panic, instead the Wolverines countered with a 9-2 run of their own to provide some much needed breathing room. Once again it was Michigan’s three-time captain Zack Novak that started the run. Novak buried a three from the right wing and Hardaway followed it up with a nice drive and strong finish. Then it was Novak again, this time on the defensive end. After forcing an Indiana turnover, Novak took off in transition and found Evan Smotrycz with the no-look pass. Smotrycz finished the layup and Novak drew a rare off-ball blocking foul which extended the Michigan possession. Michigan capped its 9-2 run with a Jordan Morgan bunny off of a great drive by Trey Burke. Yet again, Michigan had the answer for Indiana’s comeback.

With just over three minutes to go, Indiana had once again cut the lead to just two. Michigan responded again. With the Hoosiers in man-to-man defense, Burke drove the baseline and attracted two defenders. Both Smotrycz and Hardaway’s defenders collapsed to help on Michigan’s driving point guard and someone had to be open. That open player was Tim Hardaway Jr. Michigan’s sophomore guard has been struggling with his jumpshot as much as anyone but there was no doubt that he wanted this shot. Hardaway knocked down the open three which extended Michigan’s lead to five points. Despite his struggles, Hardaway has continued to hit big shots for Michigan down the stretch and John Beilein shows no hesitation in giving his go-to player the ball in clutch situations.

Indiana came up empty after Hardaway’s three and Michigan had a chance to seize the game once and for all. Hardaway got another good look at the basket, this time in the lane, but the ball rimmed out. The ball rolled around the rim for a split-second longer than two Indiana rebounders expected and Jordan Morgan capitalized. Morgan grabbed the offensive rebound – one of three Michigan offensive rebounds on the game – and extended the Wolverine possession. Morgan made the smart play to kick to the ball out to Douglass, who reset the offense. Michigan went with the same offensive set that worked the last time down the court. Burke drove baseline again, collapsed the Indiana defense and kicked the ball to Hardaway. The Hoosier defense adapted and Hardaway didn’t have an open look but he made a perfect extra pass to Stu Douglass. Douglass had enough space to shoot and knocked down his first three of the game to give Michigan an eight point lead. From there, the game diverged into a test of free throw shooting for the Wolverines and they passed the test, walking away with a 68-56 victory.