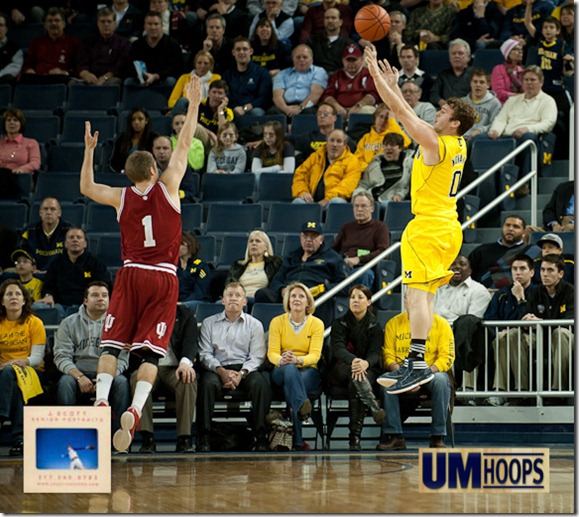 Survive and advance. There’s no rule that conference wins must be aesthetically pleasing and poor stretches of play are all but forgiven based on the final result.

For 15 minutes, Michigan looked to be in cruise control. The Wolverines opened a 20 point lead and were clearly dominating the game. Indiana answered with a seemingly inevitable run of its own and trimmed Michigan’s lead down to two points on two separate occasions in the second half. The Wolverines had allowed the Hoosiers back into the game with stretches of play that were as frustrating as the opening moments were beautiful. Suddenly in a dog fight, somewhat unlikely heroes rose to the occasion for Michigan. Tim Hardaway Jr. and Stu Douglass, who started a combined 1-of-10 from behind the arc, provided late back-to-back triples to extend Michigan’s dwindling two point lead to eight. That boost provided just enough cushion to survive with a comfortable 12 point win.

Michigan’s offense was nearly flawless to open the game. It might have sputtered but never stopped and the end result was 1.17 points per trip, Michigan’s best offensive output in league play. The opening stretch was powered by hot shooting and the final survival was a product of keen free throw shooting (15-of-19 FT). Michigan’s shooting was great on the night – 54% on twos, 41% on threes for a 57.6% effective field goal percentage – but its ability to avoid turning the ball over was equally as impressive. The Wolverines gave the ball away on just 10.3% of their offensive possessions and that discipline was paramount in slowing down Indiana’s transition offense. Certainly wary of that Indiana counter attack, Michigan didn’t spend much time on the offensive glass, rebounding just 12% of its misses. The turnovers and dedication to stopping the Hoosier break held Indiana to just two fast break points on the night.

Similar to Michigan, Indiana’s offense made its fair share of shots in this game. The Hoosiers made 48% of their twos and 36% of their threes for a 50% effective field goal percentage. Those numbers are only marginally worse than their season averages and plenty strong enough to win games. Michigan held the other three elements of the Indiana offense in check. The Wolverines forced turnovers on 24% of Indiana’s possessions. Five different Michigan players recorded a steal and Michigan capitalized on Indiana’s miscues, scoring 17 points off of turnovers. The Wolverines rebounded a respectable 72.4% of Indiana’s misses and also did a solid job of keeping the Hoosiers off of the charity stripe.

Michigan’s defensive stats were strong on the game, .97 points per possession allowed, but lackluster defensive lapses were the catalyst of Indiana’s comeback effort. Fortunately a strong opening and closing defensive performance was sufficient to slow down – both literally, 58 possessions, and figuratively – the Hoosiers.

Michigan has played .500 basketball over its last six games for the majority of what was arguably the most difficult stretch on the 2012 schedule. The Wolverines are perfect at home, a game out of first place and own six or seven top 50 RPI wins depending on who’s counting. Michigan closes its tough stretch on Sunday with a trip to East Lansing. Not much needs to be said about that game as the stakes of the in-state rivalry continue to grow with every meeting.