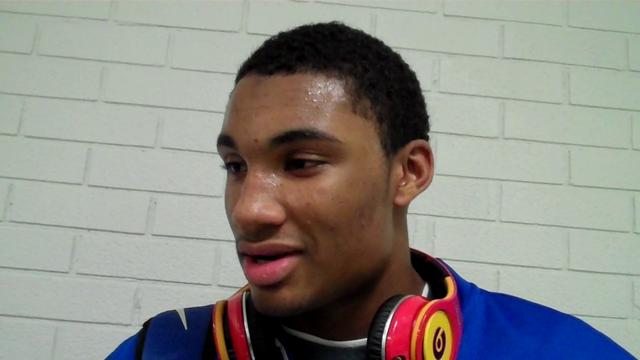 Class of 2013 Michigan commitment Zak Irvin scored a career-high 28 points (11-of-21 shooting) on Friday night as he helped lead his No. 1 Class 4A ranked Hamilton Southeastern team to a 84-72 victory over No. 4 Class 2A ranked Bowman Academy.

The junior scored 23 of his 28 points in the second half of the contest, including a stretch in which he scored 14 points in less than three minutes for Hamilton Southeastern. UM Hoops was in attendance and will have full coverage, including highlights, to come. Watch a post-game interview with Irvin in the embedded media player below:

After the jump find a detailed scouting report and a video interview with Irvin’s coach, Brian Satterfield.

The first thing that jumps out about Irvin’s performance is his ability to score in bunches. After netting just five points in the first half of the game, Irvin poured in 14 points in less than three minutes during a third quarter stretch, and also tallied 9 points in the 4th quarter.

Irvin looked frustrated in the first half of the game, shooting just 2-8 from the field and failing to knock down any jump shots. Perhaps a key confidence builder in the third quarter was when Irvin knocked down a tough jumper off the bounce from near the free throw line. The shot started Irvin’s 14 point scoring spree, and he even noted post game that it boosted his confidence and helped him to get on a roll.

What was most impressive about Irvin’s scoring performance was the versatility he displayed while shooting 9-of-13 from the field in the second half. During Irvin’s second-half tear, he showed the ability to score in a variety of ways. The 6-foot-7 Wolverine pledge knocked down mid-range jumpers on the move, hit 3-pointers off the catch, attacked off the bounce to score and earned easy points at the free-throw line.

Irvin has always been an outstanding shooter, but a key to his development will be expanding his ability to score off the bounce when attacking the basket. During the second half, Irvin was aggressive with the ball in his hands, looking to get to the rim and score against contact or draw the foul. He has nice stroke from the free throw line, and knocks down freebies with consistency from game to game.

If tonight is an indicator of his development, Irvin appears to be taking a step forward in expanding his game. He has a solid handle on the ball, and while he’s not extremely quick, he is crafty, allowing him to get to the rim when aggressive. With added strength and continued assertiveness, Irvin should be able to round out his game and become more of a multi-faceted scorer.

Another area where Irvin showed ability was on the glass. The 6-foot-7 wing pulled down seven rebounds and showed the ability to score using the offensive glass when opportunities present themselves. His length and court awareness make him a formidable presence on the glass for his position.

At the end of the day, two important areas for Irvin are maintaining aggressiveness, and mixing it up on the offensive end. If he allows himself to get in slumps throughout games, he can often seem like a non-contributor, but Irvin brings much to the table and should look to get involved early and often. He definitely looks more polished, confident and capable than he did a year ago, and if he continues to work on his overall game, he should be able to meet his potential.