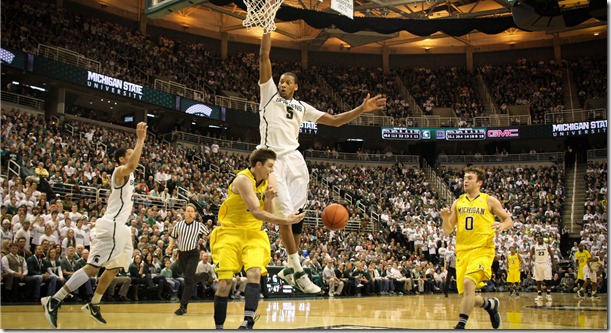 The energy and anticipation in the Breslin Center was never more obvious than the opening five minutes of play. The game was tied 2-2 at the first media timeout and both teams had accumulated more turnovers and missed shots than points. After those frenzied early moments, both teams settled in and Michigan State took control of the game. Michigan fell behind by as much as 14 points in the first half and were able to shoulder some of the Spartan attack but never quite battle back.

The Wolverines inexplicably crept back into the game and found themselves down just eight points after Trey Burke buried a halftime buzzer beater. However, that was as close as Michigan would come. The Wolverines consistently remained within striking distance for the final 20 minutes and made just enough shots to evade the Spartans’ knock out attempted and creep within three or four possessions time and again. Despite the valiant effort to remain in the game, the Wolverines could never make a breakthrough and Michigan State had all of the answers.

Most of those answers came from the Spartans’ leader: Draymond Green. Green appeared healthy and was the best player on the floor, finishing with 14 points and 16 rebounds (equal to Michigan’s team wide rebounding output) in 38 minutes. Both times that Michigan cut the Spartan lead to eight points in the second half, it was Green that scored the retaliatory bucket. Green guaranteed victory after Michigan State’s loss in Ann Arbor and he did more than enough to backup his guarantee.

In the preview I wrote that it’s sometimes hard to put a quantitative measure on “holding your own” on the defensive glass. This game makes it pretty easy to define “failing to hold your own”. Michigan State rebounded a resounding 48% of its missed shots and scored 16 second chance points. The Spartans crashed the glass on every make and four different Michigan State players grabbed at least two offensive rebounds on the game.

Michigan State’s dominating offensive interior presence extended beyond the backboard. The Spartans made 61% of their twos and were consistently attacking the basket, attempting almost 80% of their field goals inside the arc and earning 20 free throw attempts. This was vintage Michigan State offense, and the only reason this game wasn’t a blowout was because the Spartans turned the ball over on a quarter of their possessions.

Michigan’s offense was a constant struggle. Simple things like passing, catching and cutting became a laborious process and fighting that battle on every possession can certainly wear on a team. Michigan was rattled early, turning the ball over eight times and scoring just .75 points per possession in the first half. Michigan State was well prepared defensively and eliminated a majority of the defensive breakdowns that we saw in Ann Arbor. There were no easy lanes to the basket for Trey Burke or any easy offensive production in transition. Michigan made just 46% of its twos and 32% of its threes for a 47% effective field goal percentage. You have to concede the fact that you are going to have to take some forced shots late against Michigan State and you can live with that, but that makes every open look significantly more important. The Wolverines missed a lot of those open looks.

After the game Trey Burke admitted that “Michigan State was the better team tonight” and it’s tough to disagree. The Spartans got to more loose balls, dominated the glass and executed their game plan more effectively. Similar to Burke in Ann Arbor, Draymond Green was the best player on the floor and made winning plays for his team down the stretch. The Wolverines needed to play their best to pull off the upset in East Lansing but their performance was far from it.

Another road trip is next on the docket for Michigan, this one to Lincoln, Nebraska. Suddenly Michigan’s standing in the conference is precarious. The Wolverines are tied for third and Ohio State is just two games ahead in the loss column. However, there are six other Big Ten teams that are within two games behind the Wolverines. Michigan should be favored in both games this week (also host Illinois on Sunday) but any slip up could allow the Wolverines to sink dangerously close to the middle third of the league.