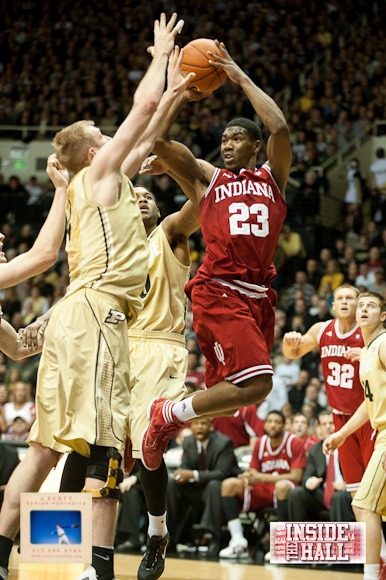 Data from StatSheet.com and KenPom.com

After losing at home to Indiana, Purdue looks primed to drop down the standings quickly. The Boilermakers still have road games against Ohio State, Illinois, Michigan and Indiana and have to host Michigan State. Another team perched on a slippery slope is Illinois. The Illini have been better than Purdue on a per-possession basis but have a treacherous final schedule with five road games – including trips to  Indiana, Michigan, Ohio State and Wisconsin – and just three home games remaining.

In the weekly conference strength of schedule tracker, it’s Nebraska that has played the toughest league schedule to date. However, Michigan and Indiana have had strong success despite playing the second and third most difficult conference slates to date.  The Hoosiers play four of their final six Big Ten games at home and the rebound victory at Purdue could help them finish strong. And how about Michigan’s scheduling for the season? The Wolverines rank first in both Sagarin and Ken Pomeroy’s strength of schedule measures this season and 12th in the RPI’s strength of schedule metric. Not bad for a non-conference schedule that was criticized from time-to-time and for a team that still has to play Ohio State again and will play four of its final seven games on the road. – Dylan Burkhardt

Illinois seems impossible to figure out this season. After winning three straight (at Northwestern and at home against Nebraska and Ohio State), the Fighting Illini lost three straight (at Penn State, home against Wisconsin and at Minnesota). Then they beat No. 10 Michigan State at home on Tuesday, starting to convince people once again that they were back on the rise. Not quite. Illinois couldn’t get past Northwestern on Sunday evening at home, as John Shurna scored 24 points to lead the Wildcats. Offense has plagued Illinois throughout Big Ten play but it was on the defensive end where the Illini struggled on Sunday, allowing Northwestern to score a scintillating 1.25 points per possession. Speaking of Northwestern, the Wildcats have now won two in a row and are 4-6 in conference play and despite defensive woes it’s now or never for one final run in conference play. – Kevin Raftery

At 32.6%, the Fighting Illini didn’t exactly shoot the lights out on Tuesday themselves but 24% shooting for the Spartans? This game was ugly. The Spartans made just 25% of their twos and 21% of their threes en route to a dreadful .73 point per possession performance. Michigan State missed jumpshots, layups, put-backs and just about every other sort of shot in the book. Things got even worse when Draymond Green went down with a knee injury that appeared serious but Green recovered to play 38 minutes on Sunday as the Spartans made 61% of their twos in East Lansing against Michigan. Illinois will take any win at this point, no matter how ugly. The Illini are right in the middle of the conference standings and just trying to stay afloat headed down the stretch. – Kevin Raftery

For the first time since 2000, Ohio State traveled to Madison and came away a winner. Wisconsin hung around all game, and even cut the Buckeye lead to just one point with three minutes to play with a big 3-pointer from Mike Bruesewitz, but the Badgers would get no closer. The Buckeye defense – the league’s best – clamped down while Aaron Craft and William Buford managed to ice the game away with big plays late. The home loss was Wisconsin’s fourth of the year. That’s an appalling statistic considering that Bo Ryan had lost just 11 home games in his previous 11 years as Wisconsin’s head coach. – Kevin Raftery

Disappointment of the week: Purdue gets trounced by Indiana at home, 78-61

There aren’t many things more deflating than getting beaten easily by your in-state rival on your home court. That’s exactly what happened to Purdue over the weekend and, to make matters worse, it was Tom Crean’s first Big Ten road win over a team other than Penn State. Purdue shot just 20% in the first half and battled back to cut the Hoosier lead to four points with under three minutes to play. Then the Boilermakers fell apart and allowed Indiana to close the game on a 15-2 run. The loss was crushing for Purdue and Purdue coach Matt Painter said he thought it looked like the game “meant more” to Indiana than it did to his own team. That’s the last reaction you want after a rivalry game but the importance of the win can’t be understated for Indiana, especially on the heels of a tough loss at Michigan.

If the name doesn’t sound familiar, you’re not alone. The freshman averages only eight minutes and three points per game, but he poured in a career-high 13 points on 5-of-6 shooting and collected four rebounds on Saturday. With Verdell Jones III sidelined, Abell played huge part in the Hoosiers’ 78-61 victory at Purdue with his defense, energy and scoring ability. His 3-pointer with 1:32 to go made it a nine-point game and all but sealed the win for Indiana. (Photo: Jamie Owens/Inside the Hall) – Kevin Raftery

Both teams have very winnable midweek games before this one — Ohio State plays at home against Purdue on Tuesday and Michigan State will take on Penn State in East Lansing on Wednesday — and assuming each team takes care of business, this game could have some serious conference standings implications. The Buckeyes currently sit alone in first with an 8-2 record but the Spartans are just a game behind in the loss column. A Michigan State win in Columbus would likely put the Spartans in pole position for the Big Ten title until the two teams meet again in East Lansing to close the season. A Buckeye win could provide just enough  room for Ohio State to breathe a little easier for the final month of play. – Kevin Raftery