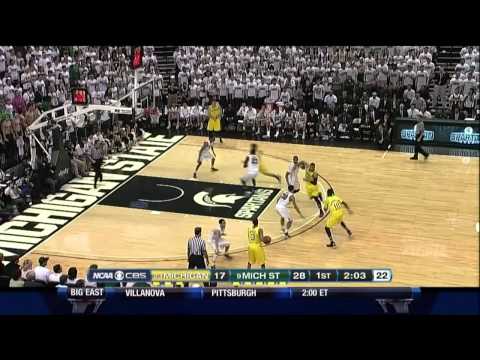 1. Michigan doubles its point total in the final four minutes of the first half

The first five minutes of play were beyond ugly and with a 2-2 score it looked like Michigan and Michigan State were out to play a game in the 40 point range. Neither team could get anything done on the offensive end, both committing several turnovers that continually broke up the flow of the offense. After scoring just two points in the first six minutes, Michigan State began to hit its stride a little less than halfway through the frame. Michigan, on the other hand, continued to stall and faced a 25-11 deficit with under four minutes to go in the first. This one was in danger of getting out of hand quickly as the Breslin Center started rocking. The Wolverines began to show signs of life in the closing minutes of the half thanks to their seniors. First, with a man in his face, Zack Novak drained a three from the right wing off a pass from Trey Burke. Less than a minute later, Novak forced a Draymond Green turnover and found Stu Douglass open for three in transition. Then, Burke and Jordan Morgan finally found some success on the pick and roll, which they had struggled with for most the half. Off the Morgan screen, Burke turned the corner, attracting both his and Morgan’s defender, and finally found Morgan rolling to the basket for an easy two. After the Spartans responded with a bucket to make it an 11-point lead, Michigan had 14 seconds to cut the deficit to single digits heading into the break. That was no problem for Trey Burke. Burke never hesitated as the clock ran down and pulled up for an NBA range three pointer as time expired. Michigan had improbably battled back to respectability and the lead that looked like it could balloon to 20 points was just eight at the half.

Coming out of the halftime break, John Beilein’s strategy seemed to revolve around getting Tim Hardaway Jr. involved in the offense. Hardaway was just 0-for-2 in the first half and looked rattled throughout. What better way to get your star player involved and boost his confidence than draw up some plays out of the half time break to get him the ball? Unfortunately Hardaway’s struggles compounded. On the Wolverines’ first possession of the half, he drove right down the lane into traffic. Michigan State’s entire defense sunk off their man to help, and Hardaway had Douglass, Burke and Novak open on the perimeter, but Hardaway unsuccessfully forced the ball to the basket over two Spartan defenders. From there, Hardaway reverted back to jump shooting, taking a number of shots which he is capable of hitting but weren’t the best attempts. Neither of his two jumpers at the beginning of the half was a great look, and he couldn’t find the basket. Those second half empty opportunities were costly because they allowed Michigan State to extend its lead and Hardaway finished the day just 1-for-10 from the field for four points. Michigan needs Hardaway to play well to win big games like this one and he didn’t on Sunday.

Even after Michigan’s rough start to the second half, the Wolverines had weathered the storm and remained within striking distance, barely. With 14:37 to play and Michigan down 10, Novak was called for traveling. Beilein didn’t like the call and he let the referees know. Fair or not, Beilein’s questioning of the call ended up in a technical foul and two free throws for the Spartans. Austin Thornton hit both and Keith Appling quickly made it a four-point swing with a floater in the lane. The Wolverines came up empty on their next possession, and the Spartans once again took advantage. After a Derrick Nix miss, Brandon Wood corralled the rebound to keep the possession alive. Michigan State got the ball back to Nix and he didn’t miss on his second try. Just 40 seconds after Novak’s turnover and Beilein’s technical, the Spartan lead had grown from 10 to 16 points. Michigan’s momentum was dwindling.

4. Draymond Green halts any chance of a Michigan comeback

After Michigan’s win over the Spartans on Jan. 17, Draymond Green guaranteed a Michigan State win in the rematch. He talked all week leading up to the game about how he had Michigan figured out and the Wolverines better be ready. He backed it up with 14 points and 16 rebounds, as many boards as Michigan’s entire team grabbed in 40 minutes. These four points might have been the most important buckets that Green scored all game. Both times Michigan cut the lead to eight points in the second half, it was Green that responded to stretch the lead back to 10.  The first was a fade away jumper with Novak right in his face, a tough contested shot but a big time play. Next, Green took Tim Hardaway Jr. off the dribble and simply muscled his way to the bucket, hanging in the air and making a difficult lay up with 6:58 to play. Michigan would never get any closer than nine points in the closing stretches of the game and these two baskets were critical for keeping the Wolverines at bay.

5. Brandon Wood grabs another offensive board and delivers the dagger

Down 14 with just over three minutes to go, it was desperation time for Michigan. The Wolverines had to take advantage of Spartan miscues, rebound miss shots, and convert quick points on the other end. They didn’t and this possession was not only symbolic of Michigan’s struggles, it was the final nail in the coffin. Michigan State bled the shot clock down to its dying moments as Keith Appling launched a difficult three. He missed the shot but Brandon Wood grabbed one of his three offensive rebounds on the day. That kept the Spartan possession alive and, moments later, Wood delivered the knock out blow. He hit a corner three – one of the only two three point shots made by Michigan State on the game – to extend the lead to 17 points with just 2:48 to play. This was just one of Michigan State’s 12 offensive rebounds and three of its 16 second chance points on the game.