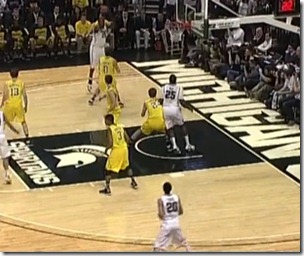 Michigan State consistently attacked the Michigan defense with an array of different looks off of low cross screens out of a 1-4 set. The basic formation is pictured above and the Spartans almost always used Derrick Nix and Draymond Green as the screeners in this look. The sets not only did a great job of getting Michigan State’s guards the ball in a dangerous area, they also allowed Michigan State to get the ball to Draymond Green in an area of the floor where Michigan had no answer defensively.

As Green and Nix set screens on the block, you will see Wood and Kearney cross and force Matt Vogrich and Tim Hardaway Jr. to communicate a quick switch. This seems simple but already puts a strain on Michigan’s defense and communication as the play is just beginning.

Hardaway gets lost on the screen while Vogrich originally appears to have the play read effectively and starts out with a half step ahead of Wood.

As both Michigan State players curl around the screens, Vogrich isn’t strong enough to fight through Green’s pick and finds himself caught in the screen and a couple of steps behind Wood.

Trice gets Wood the ball in the right spot and he’s able to catch the ball while curling and take two strong dribbles toward the basket.

Vogrich is out of position, trying to catch up and riding Wood’s back hip. Novak doesn’t help, opting to stay with Draymond Green and Wood has a clear path to the basket. Wood gets to the middle of the paint extremely easily in a position to attack.

Wood comes to a simple jump stop, pump fakes and goes up strong as Vogrich flies in late with the foul.

Here’s the play in full motion:

Michigan State ran this motion repeatedly and Michigan was simply unable to defend it, many times because of small tweaks that the Spartans made. About a minute later, Michigan State is going to start out with a slightly different look but end up in the same set. Here the Spartans will have both guards cut into the paint from the top of the key before curling off of the screens.

Trice and Wood will serve as a cutters here, while Brandan Kearney will distribute the ball.

After cutting down the lane, Trice and Wood actually won’t cross, opting instead to use a v-cut and curl into the screens on their original sides of the court.

Again Michigan State looks to the far side of the court where Kearney finds Wood wide open to receive the ball in a a good position yet again – the same spot as the previous play.

In this instance, Novak is going to help off the screen because he knows that Wood had gone up with the shot on the previously documented possession. Douglass is washed up in the screen and if Novak doesn’t help this would be another bucket for Wood.

Rather than jump stop and go up to shoot, Wood makes the smart drop off pass to Novak’s man, Draymond Green, who had drifted away from the paint just enough for an open jump shot.

Green is left with an easy 15-foot jump shot in what is probably his favorite spot on the floor and naturally knocks it down.

Michigan State kept running these double cross screens because Michigan didn’t seem to have an answer defensively. This was a great way for Tom Izzo to get Draymond Green the ball in that 15-foot baseline area where he can be so efficient. Green knocked down that mid-range jumper but was also able to put the ball on the floor, distribute, go baseline, post up Novak and hit the turnaround jumper. Michigan defended well on a couple of possessions, one time drawing a charge as Green drove, but wasn’t nearly consistent enough defending this look. Here’s another example where Michigan State goes to the near side of the court and uses the cross screens to setup a nice post isolation for Draymond Green: