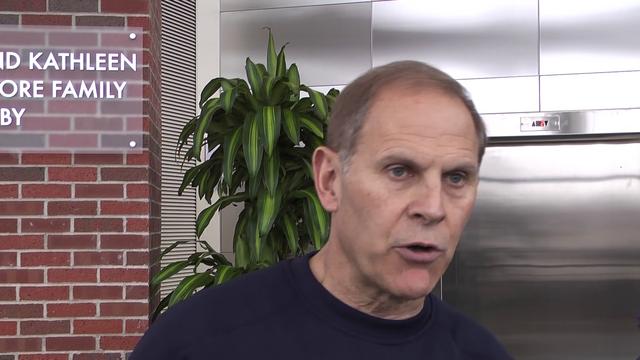 John Beilein met with the media this afternoon to discuss Michigan’s upcoming game against Nebraska. Beilein told reporters that it was his first ever trip to the state of Nebraska and that he had never coached against Nebraska or head coach Doc Saddler. The most important newsworthy bit was that Michigan would travel with just 11 players to Nebraska. That means Jon Horford (foot), Carlton Brundidge (asthma), Sai Tummala (redshirt/class) and Max Bielfeldt (redshirt/class) will not make the trip. Watch Beilein’s comments in embedded media player below or read his quotes after the jump.

Opening statement … “With Nebraska, I don’t know that we’re the first team to travel out there yet, but with football and men’s and women’s basketball we are. I don’t really know much about the trip, where we’re staying, and everything else. All I do know is Nebraska has a very veteran team. I don’t know that we’ll see a freshman or sophomore in their lineup for the time that we play. It’s going to be a challenge, just like it has been for everyone the last two years. If you want to win a game in Lincoln, you better be playing some really good basketball. It’s another step that we have to make with seven games left — four away, three at home. A win in Lincoln tomorrow would be tremendous for us.”

On preparing for the Cornhuskers, a team he’s never faced before … “I have no history with (Nebraska head coach) Doc Sadler or their players. I’ve never even seen one of their players in AAU or anything. When you play Michigan State, you have to be careful because you do know all their players, you know their coaches, so you need to be careful you don’t take things for granted, because they could change. This one’s fresh — you just have to do what you can do. While there’s no comfort in that, there’s also not comfort in knowing them too well. Our kids have to study them more than they normally would because they’ve never played against Nebraska.”

On if it helps that Nebraska also knows little about Michigan: “I don’t know. I don’t know enough about Doc. All that I know is that just with my correspondence with him and communicating with him, I love the guy. He’s got a great personality; he’s really a good coach and just represents Nebraska very well. But I don’t know if there’s an advantage or not.”

On if there is any similarity between preparing for this game to preparing for a non-conference game: “There’s similarities to it, but I hate to even mention non-conference in this game. It’s a huge game for both teams…right now they’ve had a great win at Iowa, which not a lot of people have been successful at Iowa. So we just, we gotta play well. It’s a conference game all the way that we want to get very badly if we’re gonna stay in this hunt.”

On the youth of the Wolverines … “We have three sophomores and a freshman with the ball a lot of the time. It is not Kevin McHale, Larry Bird, and Dennis Johnson out there that have been playing forever. They are still learning things all the time and every team plays you differently. As you learn, it’s like a freshman quarterback, just like when Darius Morris was a freshman, what his timing is like with people. That type of thing is natural and happens on every team.”

On the mental aspect of shooting … “Yogi Berra, what did he say? ’90 percent of baseball is half mental.’ That’s the same here — it’s all mental. Everybody on our team, and every coach, has mental things they have to work through. The shooters are like golfers in that sense. It’s everybody, not just Evan (Smotrycz), Tim (Hardaway Jr.) or me or foul shooting. A big part of the game is having a mental edge of having a lot of confidence. One or two shots that go in, flip that. One or two shots that go out, flip that. You’ve just got to keep pressing it.”

On Tim Hardaway Jr.: “We watched film together, we talked together, just look at overall things from everything from his play, body language, his stats, just try to say there’s some certainties in basketball and these are pretty certain things you can do to improve any bad things you’ve had. He’s very receptive to it. I think he has to work on sort of what is the right play and what is the right time, and let the game come to him

On conceding offensive rebounds to help the transition defense … “You look at teams like Ohio State, Michigan State, and Indiana, we played them right in a row. They have the three best offensive transition teams in the league. Right now, we probably have the smallest team playing in the Big Ten. I learned this a long time ago — you could run in there on those teams and work your tail off, and you might get two or three more offensive rebounds, and give up six dunks at the other end. You’ve got to say ‘we’re not going to let them run on us.’ We’re going to shorten the game, not let them run on us, and hopefully we make our shots and send people back. It’s very traditional to send two people back. Some games we send three people back and crash two. Those two have to crash, and that doesn’t always happen. That’s not me saying, ‘hey don’t go in there.’ It means I don’t want to go in there or I don’t feel like going in there, and that’s the difference.”