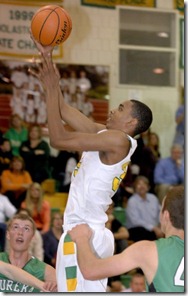 Robinson led Lake Central to a big come from behind 60-59 victory over East Chicago.

The elder Robinson had 11 first-half points and shot 5-of-8 from the field, including three monstrous dunks that sent the building into a frenzy.

EC Central (8-8) was up 11 in the middle of the third, but Lake Central and Robinson took over after that. The LC senior star and Michigan recruit went on to score a game-high 26, including two free throws to break a 56-56 tie with 1:10 left.

Scout.com’s Evan Daniels is a big fan of Robinson, noting that he underrated him originally. (Photo: Jeff Paschen)

Class of 2012 Rises in Scout.com Rankings

Despite Mitch McGary’s slide in the recruiting rankings, Michigan’s 2012 class has moved in the opposite direction ranking wise. Michigan’s three-man class ranks seventh in Scout.com’s latest ranking update which slots it as the second best class in the Big Ten. The other ranked Big Ten classes include Indiana (3), Michigan State (10) and Purdue (18).

ESPN.com also updated its class recruiting rankings and has Michigan slotted in the No. 11 spot.

McGary’s fall in the rankings from No. 2 to No. 20 raised some eyebrows both nationally and among Michigan fans. McGary was probably a bit overrated at No. 2 and he doesn’t play in the best prep system to embellish his abilities.

McGary has recorded three straight double doubles, most recently scoring 13 points and grabbing 14 rebounds in an 82-67 win over St. John’s Academy. Brewster is now 22-0 on the season.

Dave Telep posted a reaction to McGary’s ranking movement including some quotes from his prep coach. Here’s a snippet of Telep’s thoughts:

McGary’s a fun-loving personality. He’ll be magnetic with the Wolverines students and the folks in Ann Arbor are going to embrace him and vice versa. Hopefully he enters Michigan with more reasonable expectations than that of being the No. 2 player and having to put a program on his back. He’s entering a situation that is on solid ground with a great foundation. The Wolverines need him to be a function of their team — not a savior.

Regardless of McGary’s ranking, it’s safe to assume that defensive rebounding performances like we saw in East Lansing will be a thing of the past with McGary’s presence on the glass.

We posted a video interview with highlights of McGary and fellow commitment Nik Stauskas last week.

Michigan continues to keep its options open in the class of 2013 and adding a big man, or any other position, remains a possibility. One of those options is Goodluck Okonoboh. The Tilton big man plays alongside one of the best post players in the country but has his fair share of abilities as well. Here’s a recent scouting report from NBE Basketball at the National Prep School Invitational:

Okonoboh is often overlooked playing alongside Nerlens Noel but is poised for a breakout summer with Noel moving on and showed signs that the breakout is coming with his play Sunday. Goodluck was more aggressive offensively than I’ve ever seen him before making a couple of plays I wasn’t aware he had in his arsenal. He caught in the post 12 feet from the basket, spun baseline, and used 1 dribble to explode towards the rim for an and 1. On another possession he caught the ball outside the 3 point line on the move and used two dribbles to get to the rim and dunk. I don’t think I had ever seen Okonoboh put the ball on the floor more than once with any success so this was a step in the right direction. His interior defense was also as strong as ever and with that and potentially vastly improved offense, Okonoboh looks like someone whose stock is on the rise.

Five Star Basketball recently interviewed the athletic big man and Michigan was one of the first schools that he listed:

In other news, Okonoboh is pretty athletic:

John Beilein made the trip down to Toledo recently to watch 2013 big man commitment Mark Donnal and the junior impressed. Donnal had 28 points in a three point win over Springfield, OH.

Zak Irvin had a monster game for Hamilton Southeastern scoring 28 points and our own Joe Eberhardt was there with highlights, video interviews and scouting.

Derrick Walton had a another triple double, collecting 25 points, 10 rebounds and 10 assists in an eight point win over Southfield Bradford.

Bates-Diop is a long, athletic sophomore small forward with a 7-foot-1 wing span and very good perimeter skills that have been improving at a steady rate this fall and winter. High-major programs like Purdue, Northwestern and DePaul are already jockeying for position by extending scholarship offers. Michigan, Wisconsin, Oklahoma State, Stanford, Tennessee and Illinois are interested too.

“I am looking for good players, coaches and student atmosphere in college,” Bates-Diop said. “I Just want to be around good people”

Bates-Diop received some more profile love in the Pantagraph (photo credit) in an article that profiles his family, work ethic and recruitment.