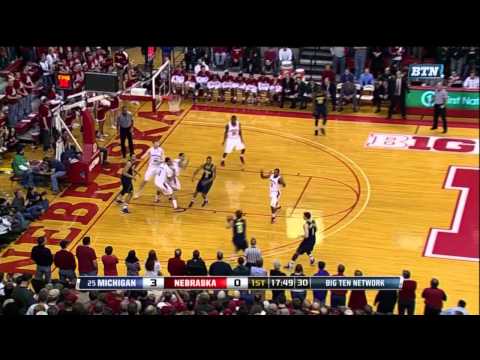 1. Novak and Douglass spark 9-2 run to start the game

Coming into this game, Michigan didn’t know much about Nebraska. The Wolverines hadn’t played in Lincoln since 1964 and really had no idea what to expect from the Cornhuskers beyond what they saw on film. The best way to settle those early questions was to get out to an early lead and quiet the 7,000 Nebraska fans in attendance. That’s exactly what Michigan did behind the leadership of its two seniors. Zack Novak started the game with a deep three from the top of the key off a handoff and screen from Jordan Morgan to get things going. Novak stayed hot on his next attempt, hitting another three, this time off a pass from Trey Burke. Not only did the bucket give the Wolverines a 6-0 lead, but it was also Novak’s 1,000th career point. He’s now just the 28th Wolverine in history to rack up 1,000 points and 500 rebounds in a Michigan uniform. As John Beilein joked after, Novak probably had the steadiest climb to 1,000 points out of any of the 28. Novak wasn’t exactly as positive on the accomplishment:

“If I did it in a timely fashion, I’d care,” he said. “At this point, playing 35 minutes a game for four years, I don’t think that averages out very well.”

In hindsight, that’s probably one of the best ways to describe Novak: steady. He’s never out-worked by anyone and will more often than not hit the big shot. He did both of those in Lincoln and, along with another three from Stu Douglass, made sure to get this game off to a smooth start. Senior leadership is critical on the road and Novak and Douglass were instrumental in spearheading this Michigan win.

Although Douglass and Novak played big roles in getting out to an early lead, Tim Hardaway Jr. continued to struggle. The sophomore’s struggles were a big reason Nebraska was able to hang around in the first half despite a tremendous defensive effort from the Wolverines. Hardaway was 0-for-7 from the field to start the game and missed his fair share of good looks and somewhat forced attempts. His first field goal attempt of the game was a contested 3-pointer with plenty of time left on the shot clock – not the type of shot you want to take if you’re trying to break out of a shooting slump. He seemed to learn from his mistake on Michigan’s next possession and posted up the smaller Nebraska defender. He made a solid post move, but the shot rimmed out. That’s the shot you want Hardaway taking but he reverted back to the three point shot for most of the half. Some shots were late in the shot clock, several were off of dishes from penetrating guards, but the results were all the same. Hardaway missed five shots total in the first half and drove to the basket only twice. His body language was as frustrating as his play and he was a primary reason why the Wolverines led by just seven points at the break despite allowing only 15 points.

3. Morgan’s buckets off nice passes from Burke get the offense going

Following a fairly uninspired offensive performance in the first half, Michigan needed to come out of the break with some energy. It was clear that Nebraska was simply not as good as the Wolverines, but it didn’t show on the scoreboard. Right out of the gate in the second half, that changed. Michigan went on a 10-0 run to start the frame, and Burke and Morgan played a big part in the run. We’ve talked plenty about the developing chemistry between Burke and Morgan so far this year, specifically on the pick and roll. People sometimes forget that this still is just their first year playing together and they’re still learning as time goes on. But in these back-to-back plays, it looked like they’ve been playing together for years and it helped Michigan finally get rolling. Just over a minute into the half, Burke and Morgan worked the screen and roll to perfection. Off the pick from Morgan, Burke drove and attracted both his and Morgan’s defender, leaving Morgan wide open under the basket with no help defense in sight. On the next possession, Morgan set a screen up top on Hardaway, who passed it to Burke on the right wing. Off the screen, Morgan cut to the basket and Burke sniped him out for another easy lay-up. Both plays probably were also a product of poor defense from Nebraska, but it’s good to see Burke and Morgan continue to develop together, and it came at a good time in this one.

4. Hardaway gets it going in the 2nd half with defense and smart play

After his poor first half performance, Hardaway came out of the break seemingly as a different player. He finished the game with just six points, but it was the little things that he did that really helped the Wolverines pull away. First, he took a charge. Following the charge, Hardaway had a hand in each of Michigan’s next six buckets. Hardaway needed something to get him going, and just that charge seemed to be the confidence boost that he needed. On the next possession following the charge, Hardaway scored his first points of the game on a nice drive and finish in the lane. From there, he didn’t try to force things and got others involved. In transition, he found Morgan wide open under the basket with a great pass. Then, after curling off a screen and driving in the lane, Hardaway attracted three defenders. Instead of forcing up a shot as he did in a similar situation in the first half, he kicked it out to Burke, who drained a three in the corner. Moments later, he drove down the lane again and this time found Novak open for a bunny under the hoop. The theme of Hardaway driving instead of settling for jumpers continued two possessions later. Hardaway drove down the middle of the lane once again and realized that this time he had an open path to the bucket for himself and finished with a finger roll. To cap off this run, he made a smart back cut and finished a wide open lay-up off a great back door pass from Novak. Hardaway was worlds better in the second half, and it wasn’t because he was shooting the lights out. He made smart basketball plays to help his team, and when you do that, chances are the shot will start falling too.

Hardaway isn’t the only Wolverine that’s been struggling recently. In fact, Matt Vogrich has struggled from behind the arc for almost the whole season. Coming into Wednesday’s game, Vogrich was just 7-for-33 behind the arc this season (.212 %). For Vogrich to truly be effective on this team, he’s got to be able to hit open threes in limited opportunities. On Wednesday, he did, and hopefully this will be the confidence boost that he needed to get going. In a span of less than two minutes, Vogrich made three shots from behind the arc, nearly half of his total amount of 3-pointers on the season. The game was pretty much in hand at this point, but Vogrich’s buckets made sure this one was in the books. Perhaps the most encouraging aspect was the bench’s reaction to every make. The camera seemed to pan to Hardaway jumping and waving his towel after every Vogrich make and the celebration on the bench was picked up on television in the otherwise quiet Devaney Center. Timely three point shooting is one thing that could make this team a force to be reckoned with down the stretch, especially if Vogrich and Hardaway can find their shooting strokes.