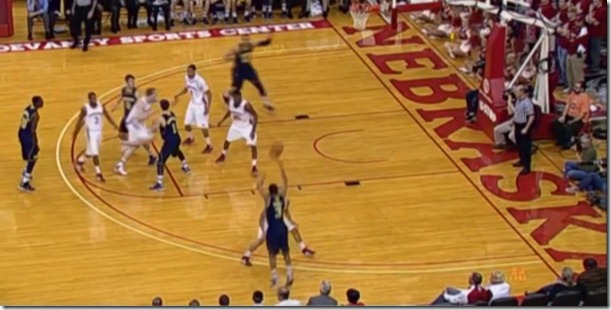 Jordan Morgan has developed more in the last two years than many expected throughout his career. He’s transformed his body and developed into an effective player around the basket but he’s not an individual offensive threat. Michigan isn’t going to throw the ball to him on the block six or seven times per game and let him isolate with his back to the basket. His scoring is broken down into a handful of distinct categories: putbacks, transition baskets, pick and roll baskets and a handful of easy looks at the basket within the offense. We’ve studied the pick-and-roll in depth for some time and discussed how well Morgan runs the floor but here’s a closer look at some things that the Wolverines do to get him easy opportunities when they need a bucket.

This play is one of the most common ways, other than the ball screen, that Michigan generates half court offense for Morgan. The Wolverines love to run this play at the start of the second half and will also run it quite a bit out of timeouts when the offense is struggling. The play starts in one of Michigan’s more basic sets, pictured above, as Trey Burke works the ball to Evan Smotrycz on the wing.

Smotrycz isn’t going to pass the ball to Novak, rather he’s going to reverse the ball back to Burke at the top of the key.

From here, Michigan would typically reverse the ball to the other side of the court. To do this, Jordan Morgan is going to set a screen for Tim Hardaway Jr. who will typically end up with a great opportunity to curl to the basket and make something happen.

However, this is not the base offense and two variations are going to occur. Rather than cut back to the perimeter on the near wing, Zack Novak is going to set a backscreen on Jordan Morgan’s man. Meanwhile, Morgan is going to roll straight to the basket and use Novak’s screen to get open.

Burke doesn’t pass the ball to Hardaway as he would in the normal offense, instead he pivots back the other direction and gives the ball back to Smotrycz on the other wing.

As Smotrycz catches the ball, Morgan is flashing wide open in the post for the easy layup and he makes the easy pass.

There are many culprits here for Iowa State, most notably Royce White (#30) who is guarding Novak. White doesn’t provide any help on Morgan which means that once Morgan’s man is screened he’s free for the easiest of layups.

As well as examples of the same play versus Oakland this year and Utah last season.

Against Nebraska Michigan ran a variation of this play, screening for the screener on a ball screen rather than an off ball screen. The set begins with Morgan setting a ball screen for Hardaway on the far wing.

Hardaway comes off the screen and Morgan’s man stays to help on Hardaway but allows him to turn the corner a bit.

Morgan is going to roll as Hardaway quickly reverses the ball across the court to Burke. However, the play is made by Novak and Douglass, who are both waiting to set screens for Morgan’s original defender.

Novak’s screen picks off Morgan’s defender and Novak and Douglass’s defenders sit idle in the middle of the lane without providing any help.

Morgan has all of the space in the world as he cuts free to the basket behind the defense and Burke finds him for the easy layup.

This is a great way to make opposing defenses pay for all of the attention that has to be devoted toward defending the ball screen. Hardaway’s quick pass to reverse the ball is what makes this play because it puts Michigan in a position to attack.

Morgan is not a big post threat and he’s not going to develop into a post scorer overnight. However, wrinkles and reads like these are an important function of the offense running smoothly.