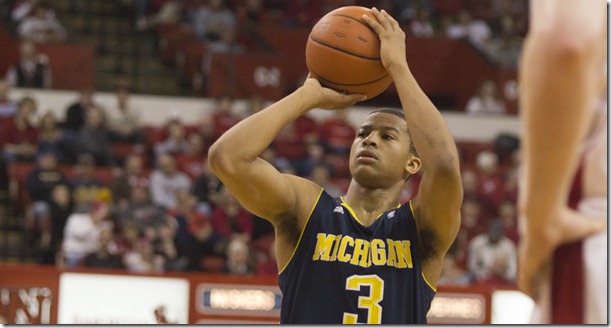 Those of you that have been around for a while will remember John Gasaway as the Big Ten Wonk while those of you that haven’t are certainly familiar with his work at Basketball Prospectus and ESPN Insider. We figured there wasn’t a better time to pick Gasaway’s brain than the Friday before Michigan’s first match-up with his alma mater, Illinois. The original tempo-free Big Ten basketball blogger, and one of our favorite basketball writers period, graciously took the time to share his thoughts on Michigan, Illinois and the Big Ten race.

I’d love to hear your unbiased thoughts on this year’s Michigan team 25 games into the season. Wolverine fans can’t find much to complain about with 18 wins but are also having a hard time figuring out just how good this team really is. Ken Pomeroy is a bit pessimistic on the Wolverines, and the U-M offense and defense both rank fifth in the Big Ten, but they are just a game and a half behind the first place Buckeyes. What’s your assessment?

Gasaway: If I were John Beilein I would be one happy cerebral X’s-and-O’s legend right about now. The Wolverines have just completed a brutal stretch in the schedule, and will now have a chance to show what they look like against teams that are merely mortal. Burke’s been way better than anyone would have dared to hope in November. No team outside Columbus is better at extracting turnovers from Big Ten opponents. Life is good.

(Ed: All of the interview questions were answered before last night’s action, Wisconsin over Minnesota (OT), Indiana over Illinois and Northwestern over Iowa.)

On December 19th you tweeted that Illinois was the most overrated team in the country. The Illini did beat Ohio State thanks to Brandon Paul’s heroics but are 5-6 since that tweet despite starting 11-1. Because you predicted this collapse, let’s hear your thoughts on your alma mater?

Gasaway: I first wrote about basketball for public consumption during the 2004-05 season, a year in which Illinois turned out to be rather good at the sport. I fancied it might happen again sometime. Alas, two NCAA tournament wins and six seasons later here I am: I’ve started professing a deep interest in per-possession happenings at Idaho and UNC-Wilmington just to distract my gaze and soothe the ache in my orange and blue heart. For a while there I could at least make fun of Northwestern, but then the other day the Wildcats won in Champaign so now I don’t know what I’ll do. About all I can say now is that I won’t take any trash-talking from Nebraska. Woo.

Bruce Weber has boasted significantly taller squads than Michigan for most of recent history and that’s caused the Wolverines problems. Is there any reason that Illinois won’t just throw the ball over the defense to Meyers Leonard for 40 minutes on Sunday?

Gasaway: Illinois has long worshipped at the altar of ball-reversal, which is fine as far as it goes — it sure worked in 2005 — but in practice that can often mean the Illini get a “Wait, why are we doing this again?” look in their eyes, by which time Leonard’s been forgotten and the shot clock is running down. Leonard is a tremendous talent and I can’t wait to see what he makes of himself, it’s just too bad for Illinois fans that he’ll be making something of himself at the next level. Also note that throwing the ball to Leonard presumes possession of the item in question, something the Illini can’t always claim. Weber’s men sport the second-worst TO percentage in Big Ten play. (Take that, Huskers!)

Brandon Paul is the leading scorer in Big Ten games but he hasn’t been particularly efficient. What’s the key to stopping the focal point of the Illini offense?

Gasaway: Give Paul this, he does draw fouls, and in fact does so better than any Illini player since Shaun Pruitt. (And that was a special circumstance. Pruitt couldn’t throw the ball in the ocean from a rowboat, and opponents were notably eager to send him to the line.) But against your low-low-foul Maize and Blue I don’t expect that ability to be decisive. In truth the very premise of your question flatters my team, perhaps unduly. The Illini are almost a full standard deviation below the league average for offense in conference play. The Ohio State eruption notwithstanding, the key to stopping such an offense has usually been to simply show up in time for tip-off.

Tim Hardaway Jr. shot Michigan into the NCAA Tournament last year and now can’t seem to make a jump shot (he’s made 7 of his last 46 threes). Are you familiar with any other recent slumps this dramatic? What’s the magical cure for John Beilein to coax Hardaway into his late season form a year ago?

Gasaway: Big Ten types will remember that Eric Gordon, of all people, went through a mighty slump during his one year in college, so it can happen even to the best players and biggest names. But you raise a great point. Hardaway’s slump has been so severe, and Michigan’s disavowal of offensive rebounding is so total, that it does present a thorny question. Basically Hardaway has to keep trying, and the Wolverines’ offense can look a lot better (and Beilein will appear to the world to be an even better coach) when those shots start falling at last.

Trey Burke has saved Michigan’s season for all intents and purposes. Let’s hear your thoughts on the freshman who Ken Pomeroy’s similarity score compares most favorably to Brandon Knight.

Gasaway: Hey, UCLA refugee and current BYU stud Matt Carlino’s no slouch either, and the similarity scores point in his direction as well. Burke rated No. 7 on the list of top 25 freshmen nationally that I put together a month ago, and if I were doing an update now he may well move up a spot or two. There’s simply no way of knowing in advance if you can drop a Big Ten offense down on the shoulders of a given freshman point guard and have things work, but things are working. His stats speak for themselves, but Burke also has the most important non-stat quality a point-guard can have, self-assurance. What a luxury to know he’ll be piloting your offense this year and next and who knows how long.

The Big Ten is the consensus best conference in the country but the parity seems to be getting the best of many teams. Of the six conference teams with five or six losses – Indiana, Illinois, Purdue, Minnesota, Iowa and Northwestern – give me one team that you are buying to make a late run and one that you are selling.

Gasaway: I’ll buy the Hoosiers. Their D would give me a heart attack if I were an IU fan, but they can score — in both of the above qualities they’re like the Duke of the Big Ten. I’m also a little unclear on why people stopped talking about Cody Zeller all of the sudden. He’s having an incredible year. As for selling I’ll unload my Minnesota shares. What Michigan just went through schedule-wise is kind of what the Gophers are facing right now: two games against Wisconsin, home games against Ohio State and Michigan State, a road date at always dicey Northwestern — it’s robust.

The Big Ten race swings into full gear this weekend with the first of two late season meetings between the Spartans and Buckeyes. Is Ohio State the runaway favorite? Does Wisconsin or Michigan have an outside shot? Handicap the conference title race.

Gasaway: Yes, the Buckeyes are the favorites, though “runaway” may not be apt for a team that already has two losses. Anyway by my lights Thad Matta has the best team the Big Ten’s seen since Illinois in 2005. OSU did look oddly permissive on D at home against Purdue the other night, but for now we’ll suppose that was an aberration. Only thing: is it just me or does Jared Sullinger go limping to the bench in every single game? It’s uncanny, and it would be unfortunate if one of these times it were the sign of something more serious. As a fan I would really like to see what he can do during his college career’s final eight weeks.