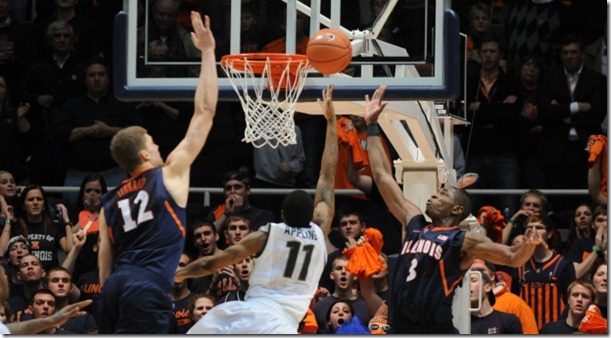 Michigan hosts Illinois in its fourth nationally televised weekend home game in as many weeks. The Wolverines look to string consecutive wins together for the first time in a month while the Illini look to right the ship after losing five of their last six games. Bruce Weber’s squad is fighting for an NCAA tournament berth while entrenched in a difficult stretch of schedule while Michigan is focused on remaining within striking distance of the Big Ten race. It’s the first meeting between these two teams and Illinois is the only Big Ten team that Michigan has yet to face this season.

First and foremost, the Illini are offensively challenged. There’s not much more to say about the league’s 10th most efficient offense which is only more effective on a per-possession basis than conference bottom feeders Penn State and Nebraska. Illinois does do a good job of finishing around the basket, making 52.5% of its conference twos, but the positives stop there. The Illini turn the ball over on 22% of their conference possessions, 2nd worst in the Big Ten, and also rank in the league’s bottom third for free throw rate and offensive rebounding. Illinois has individual talent but has simply been unable to find any offensive cohesion this season.

That individual talent emerges on the defensive end. The Illini have won five conference games – including victories over the league’s top two teams – because of their ability to defend. The Illinois defense is fairly solid across the board but is strongest inside. Illini conference opponents are making just 46.9% of their twos and seeing 11% (3rd B10) of their shot attempts blocked by UI defenders. Illinois also does a great job of forcing turnovers but is a fairly average defensive rebounding team. The Achilles’ heel of the Illini defense is its tendency to send opponents to the line, a bad habit that proved costly on Thursday in Bloomington as Indiana had as many field goal attempts as free throw attempts in a win over Illinois.

Michigan’s game plan will focus on stopping Brandon Paul and Meyers Leonard. Paul is the conference’s leading scorer at 20 points per game but isn’t all that efficient and is bolstered by his herculean 43 point effort against Ohio State. Paul has connected on just 43% of his twos in league games and 39% of his threes. He’s certainly streaky. 14 of the junior guard’s 28 made threes in Big Ten play came in just two games while he’s shooting 27% on threes in his other nine Big Ten games. Paul’s most dangerous offensive skill is his ability to draw fouls and get to the free throw line. Given his pedestrian two point shooting numbers, the defensive plan has to be to avoid fouling at all costs and force him to beat you by making difficult shots.

Leonard, a 7-foot-1 big man, is an undeniable NBA talent and the sophomore is listed on many draft lottery boards at this stage. He has legitimate size and athleticism and runs the floor extremely well. He’s a game changing shot blocker and one of the elite defensive rebounders in the conference. Leonard makes 61% of his twos and good things happen when the Illini get him the ball on the block so the best bet defensively is to throw a multitude of looks his way, frustrate him with physical play and try to get him in foul trouble (Leonard has finished six of the last nine games with four or five fouls).

D.J. Richardson is another wing guard that’s a threat from the outside but fairly inefficient inside the arc. 6-foot-5 sophomore Joseph Bertrand is just the opposite. Bertrand is always attacking the basket, attempting 96% of his field goals inside the arc, but makes a very impressive 58% of his twos. After those four players, there’s not much more offensive firepower in the Illini rotation. Freshman guard Tracy Abrams starts in the backcourt but turns the ball over often and is a below average shooter inside and out. Fifth year Bradley transfer Sam Maniscalco was supposed to be the answer at point guard but he’s shooting 11% on threes in Big Ten games. Myke Henry is a big bodied wing that attacks the basket while Nnanna Egwu backs up the post and provides a shot blocking presence but averages almost nine fouls per 40 minutes.

Meyers Leonard makes this game difficult for Michigan. He’s five inches taller than Jordan Morgan and the Wolverines need to do everything they can to force him away from the basket. Michigan has been game planning around opposing big men all season so you know what to expect: double teams from every angle, 2-3 zone, dashes of 1-3-1 and physical fronting of the post. This sort of defense is high-risk high-reward by definition but requires a patient and mature big man to beat it. Leonard has all of the skill and talent in the world but he hasn’t necessarily proven himself to be the most composed and cerebral of players.

If the Wolverines can slow Leonard, this is a game they should be able to win on their home floor. Michigan’s defense has been significantly better on its home floor and that should bode well in front of a sold out Crisler Center on Sunday afternoon. KenPom projects a 62-57 Michigan win and gives the Wolverines a 73% chance of defending their perfect home record.

Michigan’s final home game against Purdue now has a confirmed date, time and TV: February 25th at 6 p.m. on the Big Ten Network. That game is senior night for Zack Novak, Stu Douglass and Michigan’s other seniors.

Vote for John Beilein in the Infiniti Coaches’ Charity Challenge, Beilein is trailing Thad Matta by 6% in the midwest region.

The pre-weekend bracketologies have Michigan as a No. 5 seed in Columbus against Long Beach St. (CBS/Jerry Palm) and a No. 4 seed in Nashville against Iona (ESPN/Joe Lunardi).