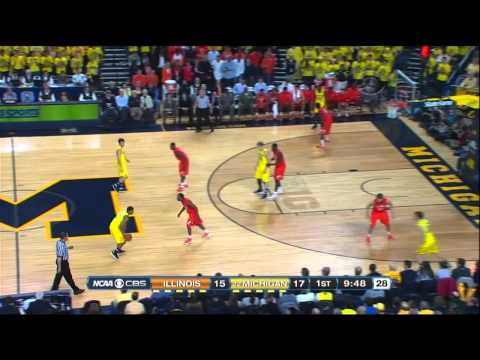 It’s no secret that Evan Smotrycz has struggled as of late. Since the Big Ten season began, the sophomore had notched a double digit point-total just twice. We’ve been waiting for Smotrycz to have a break-out game in which he shows what everybody knows he’s capable of. Finally, on Sunday, we got it. And nobody is probably happier about it than Smotrycz himself. In the first half against Illinois, Smotrycz had a team-high 12 points and played a huge role in the Wolverines’ 37-31 halftime lead. Smotrycz got going early the way any struggling shooter is told to — by attacking the rim. He didn’t convert the bucket inside off a back screen from Jordan Morgan and back-door pass from Tim Hardaway Jr., but he drew the foul and hit both free throws. Not long after, Smotrycz got his three-point stroke going and hit one from the right wing off an assist from Stu Douglass. After the game, Smotrycz said that hitting that three was a huge boost to his confidence, and it showed. Following the three, Smotrycz not only stayed hot himself but also helped get his teammates involved. With 10:21 to go in the half, he found an open Hardaway, who has also struggled as of late, for an easy two. Then he got it going defensively and forced an Illinois turnover off an inbounds pass. Not long after, Smotrycz found another teammate who has struggled this season — Matt Vogrich — for an easy two of his own off a nice back cut. After a pull up jumper and two more points off a pair of free throws, Smotrycz ended his first-half scoring with another 3-pointer. He finished the game with 13 points, three rebounds and a career-high four steals. Michigan has missed Smotrycz’s production for most of this season yet has still found a way to win. Now, if Smotrycz can stay hot and continue to produce down the stretch, there’s no telling how far this team can go.

2. Missed opportunities at the end of the half allow the Fighting Illini to close the gap

With a nine-point lead and just over two minutes to play in the first half, Michigan had a couple of golden opportunities to head into the break with a double digit lead. First, the Wolverines forced a jump ball and gained possession, but couldn’t convert on the other end after Burke missed badly on a highly contested lay in. From there, it was ugly basketball to end the half. Illinois treated the ball as though it was a hot potato on two consecutive possessions, but the Wolverines couldn’t take advantage offensively. On a 2-on-1 break, Burke decided to take it to the hoop himself with Douglass to his left. On a layup attempt that Burke would probably make 99 times out of 100, the ball rimmed out and Illinois grabbed the board. On Michigan’s next offensive possession, Burke had another easy attempt, this time an open jumper from about 10 feet out. But once again Burke couldn’t convert. On the Fighting Illini’s next possession, they finally made the Wolverines pay with a 3-pointer by Tyler Griffey a basket that was created by Stu Douglass over-helping off the shooter. The Wolverines came up empty on the final possession of the half, and instead of leading by at least 11 had Burke been able to convert, Michigan went into the break with just a six point lead, 37-31.

3. Novak and Douglass respond after Illinois cuts the lead to five

There were few times in the second half in which the Fighing Illini truly threatened to tighten the gap, but when they made their biggest push early in the half, Michigan’s seniors stepped up. After Illinois had cut the lead to just five following another 3-pointer by Griffey, Novak hit a three of his own to put the lead back up to eight. Moments later, Douglass grabbed the defensive board and went coast-to-coast, finishing with a nice right handed layup in traffic to push the lead back into double digits with just over 15 minutes to play. Both Douglass and Novak have stepped up in big moments time and time again this season, and this is just another example of two senior leaders hitting shots at times when the Wolverines need them most.

Prior to Michigan’s win at Nebraska on Wednesday, Matt Vogrich had made seven three-point attempts all season. In the game at Nebraska and the home win against Illinois Sunday, Vogrich nearly matched that with five total. He hit two big 3-pointers Sunday, but that wasn’t all. Against Illinois, Vogrich played his role off the bench almost to perfection. He was aggressive on defense, he hit shots when he was open, he took a charge and he annoyed the heck out of the Fighting Illini with his scrappy play, each of which is featured in this sequence. That’s exactly what John Beilein wants to see out of Vogrich when he comes in off the bench, and if Vogrich can continue to carry this newfound momentum into the final couple of weeks of the season, he could play a huge factor in Michigan’s success.

5. Tim Hardaway Jr. shuts the door on the Illini with a couple late buckets

After Michigan held a comfortable double-digit lead for much of the second half, the Fighting Illini had one final push left in them to try to make this a game. With 5:05 to go, Brandon Paul hit a bucket and drew the foul to cut the deficit to seven and Illinois was still alive. But not long after, the Wolverines buried the Illini with a fast break bucket and a pair of free throws by Hardaway. The first of the two plays started with a steal on the other end by Morgan. The ball bounced out to Hardaway, who was immediately off to the races with Burke by his side. Hardaway dished it to Burke, who drove to the hoop and passed the ball back to Hardaway, who made a nice catch and finish in tight quarters. After Illinois came up empty on its next possession, Hardaway took advantage to put the game away. With an open lane to the bucket, Hardaway drove right into the lane and drew the hard foul from Leonard. He hit the two free throws to give Michigan an 11-point lead with 2:24 to go, and this one was all but over.